I was impressed by David A. Perrin's history of the Socialist Party of Great Britain, well researched and well written. But I have a cavil relating to myself. He says my book. The Origins of British Bolshevism hardly gives a mention to the formation of the SPGB. This is correct. But surely the SPGB has never claimed to be Bolshevik, and therefore stood outside the remit of my frame of reference.

Moses Baritz was mentioned in the book because in those days the Left was inhabited by weird and wonderful creatures. Socialism at that time was a strange idea and consequently tended to attract strange individuals.

David Perrin could perhaps have said that I gave much more prominence to another eccentric—John S. Clarke—one of the SLP early leaders. I even wrote a short biography about him. It was entitled John S. Clarke: Parliamentarian, Poet and Lion-tamer. The Glasgow Herald, in its obituary of him, stated Mr Clarke claimed to have been the youngest and oldest person to enter the lion's den. He had around his body many scars which attested to the nature of his trade. On one occasion he was bowled over by a tiger with toothache. With the animal towering over him, he stroked it and pulled out the offending tooth.

One of my subsidiary reasons for writing his biography was that I hoped it would act as a model to other parliamentarians. In my opinion, British politics today would be much better if more Members of Parliament took up lion-taming, preferably specialising in tigers with toothache.

Then there was the SLP's general secretary Frank Budgen. He published the first cheap edition of The Communist Manifesto. He was a friend of the great Irish writer, James Joyce, who wrote a poem which begins "Oh, boozy Budgen and canvas dauber." He earned his living as an artist's model. I have a drawing of Frank Budgen naked, but, after much heart-searching, I decided not to include it in The Origins of British Bolshevism.

It might have tempted the general secretaries of other political parties to cast off all garments. That would have created the ultimate obscenity. For instance, would members of the SPGB like so see, plastered everywhere, drawings of their general secretary stark naked? 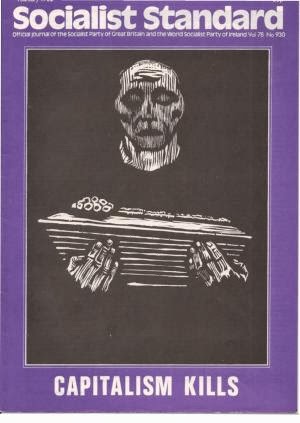 From the February 1982 issue of the Socialist Standard

Who in America does not know the McDonald chain of hamburger shops? The large illuminated red and yellow sign is a beacon for hungry folk and around five-hundred million of them were beckoned by it in 1978. Inside the shops they found everywhere the same standardised product—a bun, throwaway packaging and clean, informal seating. A few quick bites and it's time to go. Over the next few years every large town in Britain is likely to find a McDonald's opening in its centre. Add up the other fast food outlets like Kentucky Fried Chicken, Wimpy, other assorted burger bars, hot bread shops and pizzaries and you have an astonishingly large market. Burger shops in America alone total 15,000.

What's happening? What does it all mean? Are we workers being brainwashed into the fast food habit by psychologically engineered advertising? Is it just monopoly capital moving into the cheap restaurant market and cleaning up? Or is it a capitalist plot to break the tradition of the wholesome family meal in the home and get us to eat junk, so that the exchange of commodities and alienation of human existence into the very process of eating?

Fast food and capitalism
On an analogy with motor cars and petrol stations, the explanation that these food outlets are a cheap way of refuelling the workers has some plausibility. But why hamburgers particularly? People have a physiological need for food, but it does not have to be minced, pressed beef. Cheapness, speed, convenience for the customer: ease of production and standardisation for the manufacturer, provide some of the reasons; but there are social and intellectual adjustments to be made by the people who use these food outlets. In brief, hamburgers change consciousness.

The capitalist class control the means of disseminating information and so can sometimes manipulate consciousness in the workers directly, so it is said. Sometimes, too, we are told that institutions like the nuclear family condition workers into an acceptance of authoritarian relationships; hierarchy and power in the home—hierarchy and power in society; which symmetry is supposed to reinforce the attitude that wage-labour and capital relationships are natural and prevent a desire for socialism.

What are the links between food and society? "Man is what he eats", said Feuerbach. Does eating hamburgers make socialism impossible.

The abominations of Leviticus
Social anthropologists try to find links between cultural phenomena. One problem that vexed them for years has to do with the eating habits of the ancient Hebrews. Why did the Jewish religion forbid the eating of pork? There is a list of this and other abominations to be abjured in book eleven of Leviticus, a chapter in the old testament.

Tentative explanations for Jewish eating habits were that pork meat was unclean, infested with tapeworm, that pigs grew by feeding on dirt, that pig flesh went bad after slaughtering and so on. Such ideas may be summed up by saying that they credit the Jews with some awareness of hygiene rules and with primitive bacteriological knowledge. But, if this was an explanation, why does Leviticus prohibit the eating of snake meat? After all, snakes are cold-blooded animals whose flesh is easily dried and preserved from infection. Other interpreters dismissed the whole chapter as beyond comprehension, because it forbade the eating of bats, but praised the wholesome qualities of locusts. Actually Leviticus was an early field-guide on the passing livestock of the Jews, an Egon Ronay handbook on the good and the abominable food outlets in Judea.

The ancient Hebrews lived by pasturing sheep and goats in the hills and valleys. So, the exemplary clean animal for them was a cloven-hoofed ruminant. The pig crossed the boundaries of this classification because although it was cloven-hoofed, it did not chew the cud. All things that walk upon the earth must have feet and legs; the snake has neither, it is an abomination! All birds that fly through the air have feathers and beaks; but the bat has skin and teeth, it is confusion! All fish that swim in the waters have finrays and scales; but the shark, porpoise and sturgeon have neither, but they are anathema! The Hebrews took these rules to the extreme and classified the whole animal kingdom into the sacred and the profane, starting from their own means of subsistence.

Hedged around by warring tribes, conquered over and over, delivered into bondage in Egypt, these food rituals preserved the fabric of the old Hebrew society. "Be thou holy as I am holy", means, "Be thou separate from all other peoples."

All in a bun
Meals can be ideological. In an expensive restaurant the chef and waiter conspire over a complex ritual of place-settings, wine-tasting and food preservation, leaving you the impression that a meal is a measure of your social status. You go to a four-star establishment for the sake of the food, while the whole brigade of staff cunningly suggest that, as a top-class person, the food and service are only what you deserve. So the meal is taken in a social pantomime celebrating your own status as an individual in a society where everyone who can pay is a lord for a night.

There is, too, an ideology of food consumption that goes with the nuclear family meal, in a home where everyone knows their place and definite authoritarian rituals are observed: like "father carves the meat", "mother serves the vegetables" and "Johnny sits there". Such rituals can become sanctified over time, causing father to lose his temper when interrupted by unexpected visitors, or the telephone. 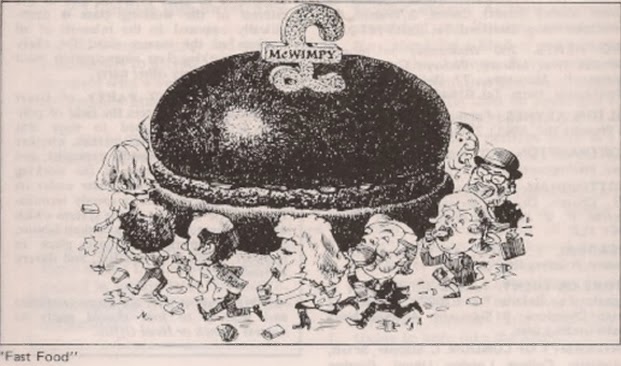 In contrast, meals in hamburger shops are taken in public democratic surroundings. You may sit anywhere, but there are no boundaries, no cutlery and no place settings. So, as the fast food habit grows, we may expect the mysticism and ritual that surround eating to evaporate. You may gauge progress in this direction by questioning the friends you meet coming out of McDonald's. Some will wholeheartedly espouse the ideology of food as refuelling: it should be cheap, quick, convenient, clean and so on. Others will assure you that four-star cuisine is their normal fare but that time, the kids, the mother-in-law or their jobs, conspired to thwart them.

Try one yourself. Walk into a burger bar and you're out in minutes. All the clutter that goes with a restaurant meal is eliminated, leaving only the bare commodity transaction and the bun. The leap from that situation to imagining the wealth of the world being freely available is a difference you'' enjoy.
B K McNeeney