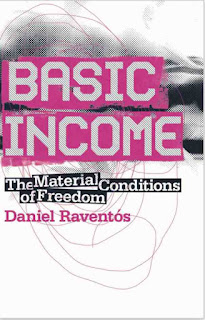 The Green Party’s idea of paying everyone a minimum income whether or not they are working might seem attractive, but it won’t necessarily leave us better off.

In 1795 the magistrates of Speenhamland in Berkshire started a system under which farm labourers on poverty wages had their income supplemented from the poor-rates. The result was predictable. Farmers were encouraged to keep, and even to extend, paying low wages. The payment from the poor-rates became a wage subsidy to employers. Today, the Green Party wants to revive this under the name of “Citizen’s Income”, which they describe as “an automatic, unconditional payment sufficient to cover basic needs of every individual, working or not”.

This is more commonly called a “Basic Income”. Daniel Raventós, whose study (and advocacy) of the proposal has just been published by Pluto Press, goes into more detail:


“Basic Income is an income paid by the state to each full member or accredited resident of a society, regardless of whether or not he or she wishes to engage in paid employment, or is rich or poor or, in other words, independently of any other sources of income that person might have, and irrespective of cohabitation arrangements in the domestic sphere” (Basic Income: The Material Conditions of Freedom).

He lists various things in its favour: that it would abolish poverty, enable us to better balance our lives between voluntary, domestic and paid work, empower women, and “offer workers a resistance fund to maintain strikes that are presently difficult to sustain because of the salary cuts they involve”.

Maybe it would do some of these things, but two linked questions arise. Where’s the money going to come from, and how likely is it to be introduced in the form its advocates want?

Abolishing means-tested benefits such as income support (in Britain) and paying every citizen a state income equal to the official poverty line (of 60 percent of average after-tax income) wouldn’t be cheap. Raventós, basing himself on income tax returns in his native Catalonia, calculates that it could be done by means of a 50 percent flat-rate tax on all incomes. Others have suggested that it might be financed by a wealth tax or by a tax on pollution, but Raventós wants to show that his scheme could be financed merely by redistributing the money the state already collects and spends on family allowances, pensions and means-tested benefits, without any extra taxes. In other words: that the total amount of money paid by the state either as benefits or tax concessions would remain the same, merely distributed differently amongst workers. As we said of the 1943 Beveridge Report that laid the foundations of the post-war “Welfare State” in Britain: it would be “a reorganisation of poverty”.

Raventós lists various objections to the Basic Income scheme, basically that it would reduce the incentive to work, an argument he is able to refute; but he misses the main objection that, like the Speenhamland system, it would be a wage subsidy to employers. To understand this, we need to look at the economics of wage labour in some detail.

Labour market forces bring it about that the income of workers is more or less what they need to keep their working skills up to scratch and to raise a new generation of workers. At one time, in the early days of capitalism, workers’ incomes were made up exclusively of what their employer paid them. Since the introduction of pay-as-you-earn income tax and the “Welfare State” matters have become more complicated. The income of many workers is now made up not only of their take-home pay from their employers but also of various payments from the state, mainly family allowances but also tax credits for the worst paid.

If a basic state income of say, £200 a week (or £10,000 a year), was brought in, this would upset the balance: market forces would tend to bring about a new equilibrium, with those workers who currently get no extra income from the state (those without a dependant family) seeing their take-home pay from employers tend to fall by £10,000. Of course it wouldn’t be as simple as this since in many cases the extra state payment would be compensating for the abolition of family allowances, but there would in general be a strong downward pressure on wages and salaries.

That there would be a tendency for something like this to happen has been recognised by less naïve advocates of Basic Income than Raventós. C. M. A. Clark, who wrote a study of the effects of the introduction of a partial Basic Income scheme in Ireland (The Basic Income Guarantee: Ensuring Progress and Prosperity in the 21st Century, 2002), admitted this was a possibility. In a previous article in the American Journal of Economic Issues in June 1996 he and fellow author Catherine Kavanagh had gone into more detail. They described part of the “conservative case for a Basic Income” as follows:

And “the liberal argument against Basic Income” as being that:


“if a Basic Income policy is seen as a substitute for a full employment policy in the traditional Keynesian sense, then it is a major step backward and would harm all workers. The Basic Income would, in effect, subsidize employers, allowing them to lower wages . . .”.

Clark and Kavanagh conclude, rather over-optimistically:


“Whether a Basic Income policy would weaken or strengthen workers’ power in the labor market is a more difficult question to answer. It would depend on the context in which the Basic Income policy was instituted and the support workers already received from the state. The existence of a minimum wage, strong unions, and enforced pro-labor legislation might be essential to preventing the Basic Income from becoming a wage subsidization policy”.

Clark and Kavanagh are being over-optimistic because no union can be that strong and because no state could sustain “pro-labor legislation” for any length of time that adversely affected profits.

Unions do have some power, but it is limited to working with favourable labour market forces to get higher wages and better working conditions. When, however, labour market conditions are against them the most they can do is to slow down the worsening of wages and working conditions. If all workers got a basic income from the state of £5000, let alone £10,000, a year, this would change labour market conditions in favour of employers. In pay negotiations they would point to the state payment as evidence that they did not need to pay so much in wages or salaries to maintain their employees’ accustomed standard of living. The workers and their unions would realise this and the negotiations would be about what the reduction in wages and salaries should be. If the reduction was less than the Basic Income then the unions would be able to cry victory, but a reduction there would be. It is just inconceivable that a state payment to everybody in work would not adversely affect wages and salaries.

As to “pro-labor legislation”, this presumably means that the state should take the side of workers against employers. Many Labour and similar governments have come into office promising to benefit wage and salary earners, and all of them have left office without doing this; most in fact have done the opposite and have ended up restraining wages and cutting state benefits. Why? It is not because they were sell-outs or were not determined or resolute enough. It was because they were attempting the impossible: to make capitalism work in the interest of the wage and salary working class.

Capitalism runs on profits, derived from the unpaid labour of workers, and can only run as a profit-making and profit-accumulating system in the interest of those who live off profits, i.e., the capitalist class who own the means of production and employ others to operate them. Any government has to accept this and that, if it’s not to provoke an artificial economic crisis, it has to give priority to profit-making over “pro-labor” legislation. This is why Labour and similar governments have always failed.

In fact, insofar as Basic Income is seen as a “pro-labor” measure as it is by Raventós, then that is a reason why it is never likely to be introduced, at least not in the form that people like him want. As we saw, Raventós puts forward as an argument for Basic Income that it would “offer workers a resistance fund to maintain strikes that are presently difficult to sustain because of the salary cuts they involve”. But can anyone realistically imagine that any government would bring in a measure that would make striking easier for workers? Already, today, there are provisions to cut state benefits paid to strikers. No state is going to shoot itself in the foot by undermining in this way the profitability and so the competitiveness of enterprises operating from within its borders.

So, if a Basic Income scheme is ever introduced, it’s not likely to be more than some limited reform of the tax and benefits system. But even it were to be introduced in full it could turn out to be counter-productive for the working class by leading to an across-the-board decrease in wages.
Adam Buick
Posted by Imposs1904 at 3:57 PM 1 comment: