The Heroic Tragedy: A Civil War Within a Civil War (2016) 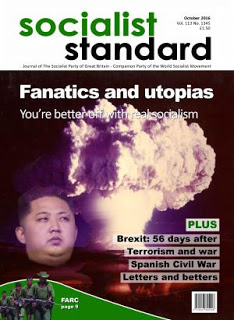 From the October 2016 issue of the Socialist Standard

The second part of our look back at the Spanish Civil War. Continued from last month.

The Spanish civil war is often simplistically described as a war of democracy versus fascism, or by Francoist historians as Catholicism versus Soviet Communism but this hides the real multiplicity of the underlying forces that fed into the conflict. Religion, regionalism, the agrarian question, rival claims to the monarchy, and class conflict all played a role in shaping the course of events.

There was tension and conflict of interests between the various groups that made up the Republican Popular Front. The Generalitat (Catalonian regional government) sought to regain power that had been taken from them during the putting down of the military rising of July 1936. Events came to a head and culminated in the ‘May Days’ of 1937, as famously described by George Orwell in Homage to Catalonia. On 2 May three trucks of assault guards, led by Rodriguez Salas the communist (PSUC – Catalonian Communist Party, pro-Stalinist) Commissioner for Public Order, arrived at the CNT/UGT controlled telephone exchange building with the intention of seizing it. Taking the occupants by surprise they were able to enter the building but were eventually forced back by machine-gun fire. The sound of the fighting alerted those nearby and news of the raid quickly spread throughout Barcelona. A stand-off ensued. On one side were the various forces of government and the PSUC, and on the other the CNT-FAI, backed up by the POUM (a small non-Stalinist communist party, similar in outlook to opposition Communists of Russia) and a smaller group The Friends of Durruti (a group within the CNT that objected to collaboration with the government).

CNT leaders made their way to the Generalitat to demand that Aiguader (Commander of the Assault Guards and Republican National Guard who was assumed to have given the order) and Rodriguez Salas resign, to pacify the situation. But no compromise could be met. The CNT declared a general strike. A network of barricades were constructed to resist the government forces, and movement of non-CNT vehicles was prevented. Sporadic shooting could be heard throughout the streets of Barcelona. A call for calm was put out over the radio, to no avail.

Anarchist and POUM divisions left the battlefront and attempted to head to Barcelona, only to be turned back by republican aircraft. Government reinforcements arrived in Barcelona via sea and road. The possibility of a full civil war within the civil war was becoming increasingly real. Seeing the futility of such a turn of events CNT and FAI leaders proposed that the barricades be taken down on the condition that no reprisals be carried out by the Assault Guards. The government agreed and on 7 May the barricades began to disappear. Five days of street fighting had resulted in more deaths and casualties than in the initial putting down of the military coup. The era of anarcho-syndicalist power in Barcelona was over. The PSUC and the PCE (Spanish Communist Party of which PSUC was the Catalonian branch) used the events to bolster their position within the government.

World war by proxy
In many ways the Spanish Civil War was a dress rehearsal for the Second World War, with foreign intervention playing a decisive role from the beginning of the conflict. The fascist states of Germany and Italy provided troops and hardware to aid the Nationalists, using the conflict as a testing ground for new equipment and techniques. In the first days and months of the conflict it was impossible for large Nationalist troop movements to be conducted via the sea, as the Republic had control of the navy. So German aircraft provided transport for the otherwise stranded forces of the Army of Africa commanded by General Franco, this being the first operation of its kind in history with a force of some 13,500 men being moved from Morocco to the mainland by the end of the operation. Another historical first befell the Basque town of Guernica which, later in the conflict, was to be the first civilian town destroyed by air raid. The other western European countries in effect supported the Nationalists by preventing arms being passed to the Republicans under the guise of non-intervention. Only Russia and Mexico supported the Republic and Mexico only diplomatically.

The aim of Russian foreign policy was to seek anti-Nazi allies in the region, a policy dependent on French capitalism. As the spread of workers’ control would be a threat to the interests of the ruling classes in the area, the goal of the Russians was to secure the victory of the Republic but at the same time stem the successes of the syndicalists. As the Republic’s only source of arms came from Russia, administered by the Spanish Communist parties, they were able to apply much leverage to the situation; though not to the extent that the Republic was a mere puppet of Moscow, as is sometimes claimed.

The Spanish Holocaust
‘It is necessary to spread terror. We have to create the impression of mastery, eliminating without scruples or hesitation all those who do not think as we do. There can be no cowardice. If we vacillate one moment and fail to proceed with the greatest determination, we will not win. Anyone who helps or hides a Communist or a supporter of the Popular Front will be shot’ – General Mola.

Away from the front-lines a wave of violent killings took place, claiming nearly 200,000 victims. Though atrocities occurred on both sides, the nature of the killings in the two different zones reflected two different attitudes towards violence and human life. In the Nationalist zone the repression was of a premeditated and coldly calculated nature designed to suppress the enemy through the imposition of terror. It has been estimated that, out of all the victims of rearguard repression, 150,000 were at the hands of the Nationalists. Once an area had been conquered they would round up known Republicans and trade unionists and mass executions would follow. Republican women would have their heads shaved and be forced to drink castor oil, so as to soil themselves in public. Thousands were subjected to rape and other forms of torture. The Nationalists were to continue with their policy of bloody repression well after the civil war had been won – in the years following the war a further 20,000 Republicans were to be executed.

The disappearance of conventional structures of law and order led to atrocities on the Republican side, but these were mostly brought to an end within the first few months of the war. Violence was spontaneous and came from the bottom up, rather than being the result of a deliberate policy. In the countryside armed gangs roamed from village to village, executing anyone that was suspected of being sympathetic to the Nationalists. Victims included captured rebel army officers and troops, the clergy, landowners and businessmen. Nearly seven thousand members of the church were murdered or executed. Some efforts were made to protect and assist the evacuation of Nationalist prisoners and others at risk, an equivalent move not seen on the Nationalist side. Workers organisations and political parties set up autonomous police forces and secret prisons, known as checas. As the conflict went on these would increasingly be brought into central control; though the Communists, assisted by imported NKVD Soviet secret police, would hold on to their checas, using them not only against suspected Nationalists but also against the CNT-FAI, POUM and other advocates of the social revolution.

Conclusion
It is all too easy to pass judgment from the distance of history. Any praise or criticism must be made in the light of the fact that without the military rising none of the subsequent events would have happened, and everything that did happen was unavoidably shaped and influenced by the conditions of war and the wider international situation. The social revolution in Catalonia only occurred because the normal functioning of state power had been disrupted by the military rising, with control of the economy temporarily passing into the hands of the syndicalists.

Could the social revolution (better understood as ‘trade-union controlled capitalism’) have spread further? The actual situation of the time meant that the odds were vastly stacked against this. The syndicalists were isolated both within the Republic and internationally. The central government deliberately held back credit and resources from the syndicalists, and international trade deals meant that foreign trade could only be conducted via the Madrid government, so economically the syndicalists found themselves behind a blockade.

But suppose, for the sake of argument, the CNT had somehow managed to become the dominant force throughout the whole of the Republic. How then would their programme have fared? Worker-controlled capitalism is subject to the same pressures as those of capitalism proper. Even with the whole industry of the nation forged into one great co-operative, the logic of market competition would remain. The national co-operative would have to be able to acquire goods and raw materials from the outside world and to do this it would have to profitably dispose of its own. In order for this to be possible enough surplus-value would have to be squeezed out of the working class so that at least an average rate of profit could be realised. As with any capitalist enterprise, the pressure would be to continually increase productivity of labour, ultimately to the detriment of the labour. The logic of capitalism is not imposed because of the greed of individual capitalists but because market competition compels enterprises to accumulate or die. Communism is not capitalism without capitalists but a system where productive activity is directly controlled by the whole of society, rather than being mediated through exchange on the market.

On the dawn of the military rising, the working class of Spain faced a bleak choice; face repression and extermination at the hands of the fascists, potentially die fighting, or suffer the isolation of exile. Though the outcome was not and could not have been socialism, the efforts of a strong and well-organised workers movement did for a short time and in many respects successfully improve their living conditions. However, at the same time we should not over-romanticise, since the positive achievements of the syndicalists were happening against a background of violence and slaughter. The cooperative worldwide society we call socialism cannot be brought about through coercive means, as what is gained by force has to be held onto by force. Repression and summary killing can only contribute to an atmosphere of authoritarianism. Nonetheless one cannot help but admire the bravery of the ordinary men and women who courageously set about building what they saw as the new society, whilst at the same time resisting the forces of a military rebellion. War and civil war is always a tragedy, but in this case it was a tragedy of heroic proportions.

Following the death of Franco and the return to parliamentary democracy in Spain, anarcho-syndicalism returned to play a small but significant, though greatly reduced, role in the Spanish labour movement. Spain’s third largest union currently is the CGT (General Confederation of Labour), formed from a split with the CNT in 1979, with a reported membership of 80,000.