An Invitation to Lord Beaverbrook (1935)

From the December 1935 issue of the Socialist Standard

On October 28th Lord Beaverbrook, the proprietor of the Daily Express and other newspapers, delivered a lecture on various topics to the members of the Mile End Old Boys’ Club. In the course of his remarks he stated that the only war in which the British should fight in was in defence of the British Empire, which he ambiguously styled as “ours.”

A party member who happened to be present pointed out that the wealth of the British Empire was owned by a small section of the population and that, therefore, there is no reason why the dispossessed majority should defend it. Lord Beaverbrook advised our member to become one of the minority, but on being challenged that that was frivolous, he was forced to admit that he was “only chaffing,” and that the proper answer would take too long for discussion at that meeting.

We would be pleased to give Lord Beaverbrook ample space to reply to our member’s challenge in the columns of THE SOCIALIST STANDARD. Alternatively, perhaps he would prefer to debate with us in the columns of the Daily Express, where he would, no doubt, feel more at home. How about it, my Lord ? A copy of this is being forwarded to his Lordship.
Scrutator 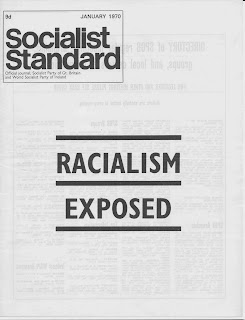 You maintain that the ICO pamphlet on Partition “is the kind of analysis we ourselves have made for years”. The reviewer twice refers to the Border as “just a tarriff barrier”. That is certainly not the kind of analysis made by the ICO. We have shown that the uneven development of capitalism is the basis of Partition. The tarriff barrier is the economic essence of the Border. But the ICO has never, in the SPGB manner, tried to reduce the social and political superstructure to the economic base. The economy is not the superstructure, though it determines the development of the superstructure. Religious sectarianism has nothing to do with tarriff barriers as such. If the Border is “just a tarriff barrier” its social effects are unaccounted for. There have been many tarriff barriers in the world which did not have the effect of riddling the workers behind them with religious sectarianism. (And it should be noted that religious sectarianism began to to intensify in Ireland when it was rapidly dying away throughout Europe). With the absurd notion that the economy is its superstructure, and that therefore the Partition which had the effect of drowning working class politics in religious sectarianism was “irrelevant” to the working class, it is not surprising that the “World Socialist Party of Ireland” has been a non-starter in the working class movement. The “irrelevant” Partition politics of the bourgeoisie have exercised a massive negative influence on the working class. but we have noticed that that the WSPI has [not] exercised any social influence, negative or positive! As we said before, it is the Socialist Party of Great Britain, and not the Partition, which is irrelevant, and a matter of no concern, to the working class of Ireland.
Yours,
G. Golden,
Irish Communist Organisation,
London, N.19.

Reply:
The basis of Mr. Golden’s argument would seem to be that since Partition is the cause of religious sectarianism in Northern Ireland the removal of the Border would mean the end also of sectarianism.

We suggest he has got things the wrong way round: it was rather the success of the big capitalists of North East Ireland in stirring up anti-Catholic prejudices amongst their Protestant workers that gave them the mass support needed to force the British government to exclude Ulster from Home Rule. Religion was deliberately introduced into politics in order to serve the economic interests of the employers there. Had they not been able to win mass support (to the extent of obtaining pledges to take up arms if need be) for their opposition to Home Rule, then there would probably have been no Border. Sectarianism, serving the interests of a section of the Irish capitalist class, could thus be said to have given rise to the Border.

The removal of the Border would not in itself end sectarianism; indeed it might make it worse since many Protestant workers would still resist this change in their rulers with violence.

Sectarianism can only be removed, as we pointed out in the Socialist Standard in January last year, by “a sustained campaign to clear away the political and religious garbage that the working class got from its leaders of yesterday”. We went on to ask, however, “why struggle for the apple when the same effort can bring us the orchard?”

Sectarianism is not only a barrier to working class unity for Socialism, but it is also a barrier to those who want the workers’ support for an ordinary reformist party or for an all-Ireland republic. In fact it has now even become an embarrassment to those capitalists, international and local, who have considerable investments in Northern Ireland.

The World Socialist Party is thus not the only organisation campaigns, against sectarianism. This is why it important to ask what will replace it. We would not regard a change to normal non-sectarian capitalist politics (of the British or Irish variety) as much an advance. Our task of spreading socialist understanding in place of political confusion would still remain.

The I.C.O. may be opposed to sectarianism but it is not seeking to replace it with socialist understanding. Rather, with its Anti-Partition stance it is lining itself up with Irish nationalism, The ideology of that section of the Irish capitalist class that was opposed to Union with Britain. Indeed the I.C.O can be seen as basically an Irish nationalist organisation merely using the few socialist phrases that have survived mauling at the hands of their men. Lenin, Stalin and Mao.

We confess that we are not sure what point Mr. Golden is trying to make in the second part of his letter — unless he is again putting the cart before the horse and arguing that Partition is the cause of sectarianism. We will leave the matter for our readers to try and work out for themselves.