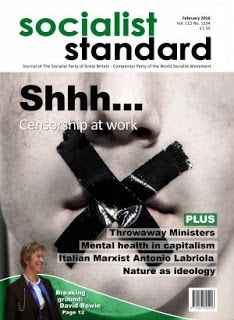 Looks like Smeagol, acts like Sauron . . .
. . . and ‘cites Hitler’s Germany as an example of effective government’ (theguardian.com, 1 January). Who can this be? None other than Turkey’s ever power-hungry president, Erdoğan. Last year a Dr. Çiftçi compared him to a character from Lord of the Rings. Legal proceedings ensued and a team of academics, psychologists and a media expert were asked to prepare a report, due this month. Socialists may find such antics amusing at a superficial level, but the election of this precious president is a reminder that our class continues to support the status quo. Hitler and the fundamentalist Islamic Salvation Front, just to give two other odious examples, won elections.

Trump’s doublespeak
‘Not only does he refuse to be held to any standard of truth, he refuses to act ashamed when he gets caught in a lie, or even grant that he might have been mistaken. And his supporters go right along — if Donald says it, it’s true, and no bunch of media jerks are going to tell them otherwise’ (truthout.org, 1 January). But, of course, Trump is not alone. How do you know when politicians lie? When they open their mouths. Marx’s favourite motto was doubt everything.

They have the technology
‘Boyalife Group and its partners are building the giant plant in the northern Chinese port of Tianjin. It is due to go into production within the next seven months and aims for an output of one million cloned cows a year by 2020. But cattle are only the beginning of chief executive Xu’s ambitions. In the factory’s pipeline are also thoroughbred racehorses, pets, police dogs specialised in searching and sniffing, and even humans’ (dailymail.co.uk, 1 January). The future is bright! The future is full of cloned, iron-heeled dictators, Erdoğans, Kardashians and Trumps. Meanwhile, they can comfort themselves with a cloned version of their pet dog for a mere $100,000.

Down and out
‘There is a war on, and it concerns the homeless’ right to sleep. Across the United States, recent years have seen a spate of municipal laws that criminalise the act of sleeping in public places. These laws often target the act of sleeping in private vehicles under the guise of anti-camping legislation’ (alternet.org, 2 January). Wrong! The war in question has been correctly identified by none other than Warren Buffett: ‘there’s class warfare, all right, but it’s my class, the rich class, that’s making war, and we’re winning.’ Consider, the 400 richest Americans now have more wealth than the bottom 61 percent of the population and every 38 seconds a U.S. citizen dies of poverty and poverty-related social conditions. There are over 578,000 sleeping rough in the US alongside at least 10 million unoccupied homes. Houses are built for profit not need. Thus, particularly during a slump, brick mountains, empty houses, mothballed developments, and unemployed builders exist alongside the homeless and those existing in sub-standard accommodation.

Freedom for them
‘Something important and, freedom lovers may think, rather wonderful seems to have happened at the United Nations, and it went largely unreported in mainstream media. The UN General Assembly approved a draft resolution Permanent sovereignty of the Palestinian people in the Occupied Palestinian Territory, including East Jerusalem, and of the Arab population in the occupied Syrian Golan over their natural resources’ (dissidentvoice.org, 1 January). Campaigners for Palestinian ‘freedom’, who often argue that sanctions brought down the apartheid regime of South Africa and they are what will bring down the apartheid regime of Israel, ignore the lesson of history. The election of the ANC to power was supposed to see the grinding poverty of the townships ended, but the ANC have turned out to be powerless to run capitalism in a way that would end exploitation and poverty. Capitalism means the continuation of war and want. Workers have no country.

Capitalism is bad for you
‘An Ofcom report . . .  found, on average, adults spend more time using technology than sleeping each day. Work has become more intense as new technology enables, and even forces, people to work faster, do more, and multi-task, said Kinman. Her research also finds rising presenteeism – for example people working when they are ill’ (theguardian.com, 2 January). Studies have found that health problems stemming from job stress, like hypertension, cardiovascular disease, and decreased mental health, can lead to fatal conditions that wind up killing about 120,000 people each year—making work-related stressors and the maladies they cause, more deadly than diabetes, Alzheimer’s, or influenza.

I read ‘What is the Islamic State’ (Socialist Standard, December). I’d also got the Nation at the same time and read ‘No Cause for War’ by Juan Cole. The Paris attacks have filled newspaper pages and the airwaves since 13 November and last week.

The article cites Juan Cole’s blog site as a source. Because words have sensuous power, words matter. Cole for his part uses the term ‘Islamic State’ the first time and then introduces the term ‘Daesh’ that is commonly used for the group in the Arabic press. It is Daesh that Cole uses from then on.

Propaganda works. We tend to categorise new information according to a generalisation of the prototype that heads each of our mental categories. Using the label ‘state’ tends to reify a gang of Mafioso or a drugs cartel into a conceptually real state. This is ideological thinking and we should avoid doing it and spreading it.

Look what the USSR did to the perception of socialism through the power of a misapplied word. Cole introduces the commonly accepted term, defines it away and uses the new signifier in its place which I think is perhaps a proper practice to achieve greater clarity.

Email ThisBlogThis!Share to TwitterShare to FacebookShare to Pinterest
Labels: February 2016, Islamic State, Juan Cole, Letters to the Editor, Politics and Language, R2016 Links to this post

The basic proposition of the Keynesians comes to this: steady growth at full employment level can be kept if the State controls spending and investment so that when a boom is developing it cuts down, and when a slump threatens it increases its spending.

Keynes had been a critic of laissez-faire for a long time before he wrote his General Theory. He was a member of the Liberal Party and sympathetic to the kind of State capitalist schemes the Fabians pushed. When he wrote this book he already had an international reputation as a leading economist. His book was given wide publicity because in it a well-known economist provided a theoretical justification for policies already being tried in the 1930’s. Keynes’s theories and policies—equalizing taxation, cheap money. State control—were eagerly spread by the Labour Party and “progressives’’ generally. After all, this was what they—and Keynes himself, for that matter—had long been advocating. Helped by these partisans Keynesian economics has become the dominant theory. In Britain it completely conquered the universities and government departments. In America some conservative economists are still fighting a rearguard action on behalf of laissez-faire against Keynes’ theories which they see as State Capitalism (to them “socialism”).

It is true that Keynesian economics is a theory of State Capitalism. It is a theory that Capitalism can be managed by professional economists from government departments. It is Fabianism in a new guise: capitalism run by “experts”.

In Britain the first Keynesian budget was that of 1940 so the “experts” have been in charge for over 25 years. How have they fared? Have they been able to control capitalism?

This particular combination of circumstances has allowed the Keynesians to claim as the benefits of their “economic management” what in fact are the results of world market conditions favourable to the capitalists of the countries concerned.