Weekly Bulletin of The Socialist Party of Great Britain 133

Welcome to the 133rd of our weekly bulletins to keep you informed of changes at Socialist Party of Great Britain @ MySpace.

"You have the right to free Speech
As long as
You're not dumb enough to actually try it"
The Clash, Know Your Rights, 1982. 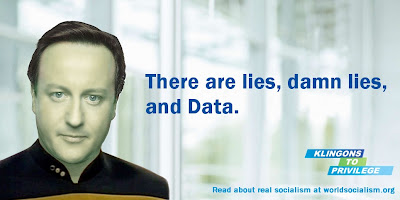 SPGBers who like that sort of thing tell me that Cameron has a passing resemblance to a Star Trek character called 'Data'. What do I know. Buck Rogers was my sci-fi fix as a kid.

More of Max's excellent Cameron posters on his website Capitalist Money Madness. I especially like these two.

Book Review from the January 2010 issue of the Socialist Standard

The Frock-Coated Communist: the Revolutionary Life of Friedrich Engels. By Tristram Hunt

In February last year we reviewed John Green’s biography of Engels, and now along comes another. This one was launched with far more hype, coming as it does from a well-known publisher and being written by an up-and-coming academic and TV historian. Both contain ‘revolutionary life’ in their sub-titles, and even feature on their front covers versions of the same portrait of Engels at the age of twenty.

And of course both books tell essentially the same story. Engels was born to a capitalist family in Germany in 1820, and rebelled against his upbringing but was forced to spend twenty years working for the Manchester branch of the family firm. He supported Marx financially, till in 1869 he was able to retire, and the next year he moved to London. Besides helping Marx’s research into capitalism, he wrote classic works such as The Origin of the Family, Private Property and the State.

Where Green saw Engels as something of a proto-Bolshevik, Hunt has a more balanced view in this respect. ‘Contrary to Lenin’s later assertions,’ he says, ‘Engels was no vanguardist.’ He appreciated, too, that workers could come to power using the ballot box. Nor was he a Fabian or a supporter of the reformism pursued by the German Social Democrats. Despite some claims to the contrary, he was not responsible for the horrors of Stalinism, and did not corrupt Marx’s ideas in any way.

But Engels was not perfect, by any means. He had some anti-Irish prejudices, but he later put these aside. He does not seem, though, to have modified his anti-Slav views, which led him to call for the disappearance of ‘entire reactionary peoples’. He was against homosexuality, and was not sympathetic to the women’s movement. In the 1840s he apparently slept with the wife of Moses Hess, a former associate with whom he and Marx had fallen out, and then boasted that she was in love with him. Yet ‘the womanising Engels ended up authoring the foundation text of socialist feminism’ (i.e. Origin).

As Francis Wheen did when writing about Marx, Hunt concludes by noting how contemporary Engels now seems, when read in the context of economic recession and globalisation.
Paul Bennett