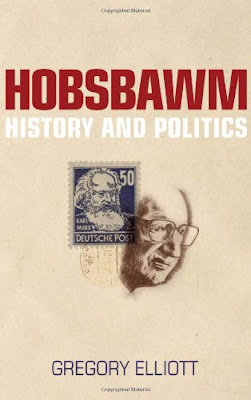 However, when it comes to Hobsbawm’s politics a very different picture emerges. Hobsbawm, Thompson, Hill and Hilton were at one time all members of the Communist Party of Great Britain (CPGB). But whereas Thompson, Hill, Hilton and many others saw the error of their ways – especially after the suppression of the uprising in Hungary by Russian military in 1956 – and resigned, Hobsbawm remained in the CPGB until its dissolution in 1991. As a cheerleader for the CPGB and the Russian empire, Hobsbawm defended the leading role of the party advocated by Lenin, and dismissed the view that the emancipation of the working class had to be the work of the working class itself – the cornerstone of any Marxian politics. Even now, aged 93, he is still unapologetic about his political beliefs. Hobsbawm the historian had some interesting things to say, but his politics remain anti-Marxist.
Lew Higgins
Posted by Imposs1904 at 8:56 PM No comments: 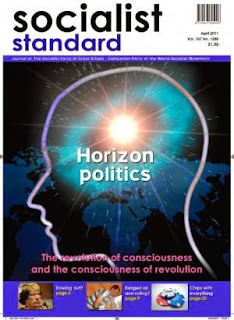 Editorial from the April 2011 issue of the Socialist Standard

When the popular movements against long-standing despots in the Arab world spread from Tunisia and Egypt to Libya the Western powers thought that something they had long wanted – regime-change in Libya – was about to be handed them on a plate. But they didn’t have the same control over Gaddafi as they did over Moubarak and Ben Ali and so could not arrange for him to bow out. His own man, and true to form, Gaddafi chose to try to brutally repress the movement. With the support of mercenaries and some sections of the population armed with superior military power, it was looking as if he might succeed.

Faced with this prospect, the Western capitalist powers have decided to play the military card too and have launched a series of bombing and missile raids against the armed forces loyal to Gaddafi. Since, under the UN charter, wars not authorised by the UN are “illegal”, they have had to present their action as being to protect the civilian population against the very real exactions of the Gaddafi regime. Even so, when claiming that the military intervention is motivated by humanitarian concerns, British Prime Minister Cameron has always added that it was also in the “national interest”.

The “national interest” is in fact that the interest of the capitalist class of a country, not of its population. Their interest in this instance is, as in Iraq eight years ago, to have a friendly and reliable regime in an important oil-producing country. That’s what the bombings are really about.

If a desire to protect civilians from being shot down by governments was the real motive, why are the Western capitalist powers not also intervening to stop the despots in Yemen, Bahrain and now Syria from doing this (as they have done)? And why did they not intervene to stop Israel slaughtering civilians in Gaza three years ago?

At least they haven’t had the effrontery to claim that their aim is to bring political democracy. How could they when their bombing campaign is being partly funded by the despotic regime in Saudi Arabia? And in which war planes from the hereditary despots who rule Qatar are taking part?

It is not so much that the Western powers have double standards as that the foreign policy of capitalist states is not conducted according to any abstract standard. There is no such thing as an “ethical foreign policy”. What motivates their diplomatic and military activity abroad is a desire to protect and promote the economic interests of their capitalist class.

Some are urging support for the Gaddafi regime on the ground that, despite everything else, it is “anti-imperialist”. Not us. As Socialists, we naturally sympathise with workers anywhere struggling to get the added elbow-room to wage the class struggle that political democracy represents, but we denounce the hypocrisy and cynicism of the ruling classes of the Western powers in invoking humanitarianism to once again resort to killing and destruction in pursuit of their sordid “national” interests.
Posted by Imposs1904 at 8:16 PM No comments: