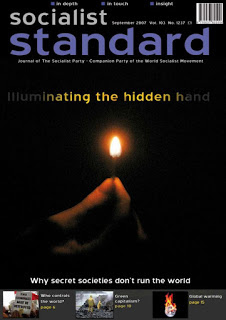 From the September 2007 issue of the Socialist Standard


Can capitalism ever be green?

During the last hundred years more irreversible damage has been done to the natural environment by human action than in any previous period in recorded history. Rarely a day goes by when our attention is not drawn to the various issues of environmental degradation and how the increase in human activity is impacting on large areas of the natural environment globally. Among these are: climate change; the increase in pollution; the depletion of fish stocks; over-reliance on fossil fuels; nuclear energy; soil erosion and desertification; the pace of species extinction; the increase in skin cancer; forest and wetland depletion; etc.

This has led a dedicated band of economists, with an ecological bent, to make a study of natural resources (which they label "natural capital") and of the long-term, societal and possible profitable benefits resulting from their careful management. Their premise is that, if capitalism continues on its present course of destroying natural resources by continuing to ignore the real "costs" of the negative effects on the natural environmental and human health, in the long-term it will lose out big time.

Which is a fair conclusion but comes as no surprise to anyone who understands the basic economics of capitalism. However, what these "green economists" propose as a supposedly viable solution - and one which is being vigorously advocated globally - is the creation of an artificial cost-benefit market by the international enforcement of a mixture of environmental taxes and regulations, so there is long-term protection and management of natural resources through market forces. The present trade-offs of carbon emissions is just one example of putting these proposals into practice, and it has been taken up by those who are of the opinion that market forces hold all the solutions to the problem of environmental and health "external costs", i.e. the money that has to be paid for clearing up the environment or on health care that don't have to be paid for by capitalist firms whose activities cause them.

There's a lot more of such proposals in the pipeline, but when stripped of their jargon, in practice it means that for capitalism to go green it must factor in all the possible and the expected environmental and health "external costs" and in effect set limits on the accumulation of capital. If the green economists have their way - and it's a very big if - it would mean that a brand new set of market conditions will have to be enforced, ignoring the realities of how capitalism actually operates.

The two most difficult problems that would have to be confronted are measuring the value of these external costs and tracking the specific offenders. Obviously to try putting a price tag on natural resources is going to be extremely difficult for several reasons. How do you arrive at a monetary value of the air we breath when it is freely available? Or measure the value of the disappearance of a particular species of wildlife? Or even of a view of a snow-capped mountain peak? What exactly are you going to compare and value it against?

The green economists are seemingly unaware that a measure of value can only be ascertained once labour power is employed to transform 'natural capital' into a commodity. For instance, the deserts of the world have little or no value. However, once labour power is used to make them productive and profitable by extracting the mineral properties that deserts may contain either below or above ground, they come to have a use value and exchange value. Until then they remain deserts. In short, it is only possible to measure and apply value through the use and exchange of commodities. Anything outside of this, like attempting to measure the true external costs - and especially as regards the natural environment and human health - only arrives at a value which is largely subjective.

Cooperation versus competition
This lack of understanding of the workings of capitalism and the production of commodities does not stop here because the premise of the green economists also includes the false assumption that a so-called 'common interest to protect natural capital' can be created within capitalism and adopted by society as a whole. Obviously, no sensible person is going to deny that the sooner we work with nature, rather than against it, the better. By increasing our understanding of the interaction between the natural environment and the impact of human activity, society will be in a better position to minimise the damage on natural resources, and be able to arrive at rational judgements on whether or not any interference in the natural environment is justified and warranted.

But capitalism is not a rational system when you consider that the capitalist class have their own agenda which is totally blind to the creation of a common interest. The only interest the capitalist class have is to obtain profits through the quickest and easiest way possible so that the accumulation of capital continues. A fundamental contradiction of capitalism is that although the capitalist have a common interest - as a class - to cooperate to keep the system going, by necessity they also have to compete within the market. If they don't compete they go under or are at best taken over by other capitalists.

This built-in rivalry between the sections of the capitalist class always results in casualties in some form or another. At one end we have the everyday casualties of lay-offs and redundancies. Whilst at the other end from time to time inter-capitalist rivalry erupts into a full scale war - with extensive human casualties, refugees, communities being destroyed - and extensive damage to the environment and the destruction of wealth on a tremendous scale.

It is these conditions of competition which make it extremely difficult to reach any regulatory agreement which can have a global application. But not impossible. When it has been in the common capitalist interest to facilitate an expansion in the global market capitalist governments have drawn up international agreements, for example on postal services, maritime law, air traffic control, scientific research at the poles, etc. These agreements are generally abided by, specifically because they do not reduce the rate of profit. It's when any such proposals come into conflict with the rate of profit that the competitive self-interest of the various national sections of the capitalist class becomes focused on the problems of winners and losers appears. This is usually announced in the media as, "There was a failure to reach an agreement over who is to pay the bill".

If they do arrive at some agreement on the international regulation of environmental external costs they can only adopt one of two options. Either an approximation of the real external costs is to be shared out amongst the global capitalist class as a whole through a general environmental taxation. Or the costs are to be paid by the individual capitalists, and managed through the nation-states acting as the main agents and international bodies set up to supervise payments and trade-offs and also to regulate environmental impacts and damage. It's the latter that's in the early stages of being adopted with the "carbon trading".

Conundrum
If market forces essentially cause and create environmental damage by literally encouraging an irrational human impact, how can you realistically expect those self-same forces to solve it? This conundrum will almost certainly intensify if globalisation picks up pace and the competition gets even tougher for the possession of scarce resources, especially energy and water. But the conundrum does not end there since the system of capitalism is also dependent on economic growth and the accumulation of capital on a larger and larger global scale. And in order to achieve an accumulation of capital, market forces must not only create and produce commodities on a mass scale but also destroy them in a systematic fashion never known in human history. When confronted by barriers of environmental legislation which are designed to diminish the rate of expected profits and the accumulation of capital, the capitalists will do what they have always done in their search for short-term profits: finding or creating loopholes, moving the goalposts, corrupting officials, trying to bribe the local population with empty promises, or shifting the whole concern to an area or region where a more favourable reception is expected and profits maintained.

Unlike the green economists, socialists conclude that in a class-divided society where the means of living are used to serve the interests of the owners of private property any talk of finding a 'common interest', so that there is a change of course of market forces and consequently a greening of capitalism, is a fool's errand. We have, therefore, consistently argued that, where classes exist, there are class divisions in the production and distribution of wealth with the subsequent inequality manifesting itself in a class struggle between two classes with diametrically opposed interests.

Arising out of this analysis we recognise the need for a majority of the workers to actively engage in a political struggle to bring about a revolutionary change in the social relationships - from private property ownership to a system of common ownership, a society of free access where wage slavery has been abolished, money is obsolete, hierarchical structures pointless, class laws transformed into social rules, and production is geared to satisfying human needs. Only when we are living in such a society will we be in a position to minimise any environmental damage caused by human activity.

Once we have reach this stage in human development and social evolution - where our interaction with the natural environment not only enhances our understanding of ourselves but also converges with a social recognition that we are as much dependent on nature as is nature dependent on us - so we will be able to start to tackle a rational clean up of the environmental damage which capitalism will have left in its wake.