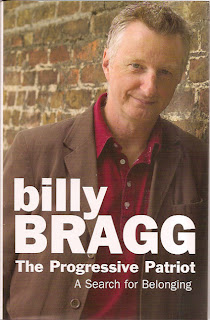 Book Review from the July issue of the Socialist Standard

The Progressive Patriot by Billy Bragg

Singer and songwriter Billy Bragg has produced an engaging and enjoyable read, in an attempt to search for a meaning to his working class upbringing and his relationship to the place he was born, Barking in Essex.

This is a romp through political and economic history as well as a look at popular music and culture as Bragg experienced it growing up in the 60s and 70s. The chapters that work best are those where Bragg examines his family origins in East London, analysing key historical events from a family perspective and using the historical artefacts they left behind to do it, from pictures of dockland trade union struggles to wartime diaries and gas masks. As might be expected, the chapters focusing on Bragg's formative musical influences are good too, and he has an ability to set them in a social and political setting in a way that links his personal development to wider developments: most notably the vestiges of the hippy era, punk rock and 'Rock Against Racism'.

His ultimate aim though is to 'reclaim the flag', finding a meaning and purpose in Englishness that transcends and even nullifies the Little Englander nationalism of the Euro-sceptics and the outright racism of the BNP. This is a more difficult task and one that is inherently problematic. For while having pride in tangible places that have meaning to those who live there (in Bragg's case, Barking) is one thing, having patriotic pride in entirely artificial constructs such as nations is another thing altogether.

In effect Bragg tries to create a left-wing English nationalism that rivals the leftism of the nationalist parties in Wales and Scotland, as if Welsh and Scottish nationalism had somehow been a force for radical politics (rather than another nationalist dead-end) that England can emulate in some way. He writes intelligently about England and the Empire, and the methods through which it came about, yet can still find time to bemoan the fact that England was the only country in the last World Cup without its own parliament, passport and national anthem.

If Bragg's anti-racism and pride in his class is highly commendable, then this experimental flirting with nationalism (whether English, British, or any other) is as dangerous and misplaced as his long-documented support for the Labour Party. While the book is entertaining and worth reading, it suggests that his 'search for belonging' that is the book's subtitle, still has some way to go.