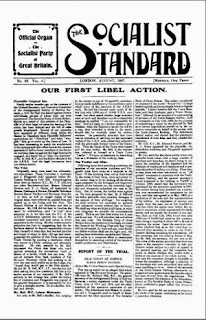 Editorial from the August 1907 issue of the Socialist Standard

In the first number of the Socialist Standard, published in September, 1904, it was stated in an editorial that “in dealing with all questions affecting the welfare of the working class our standpoint will be frankly revolutionary. We shall show that the misery, the poverty and degradation caused by capitalism grow far more rapidly than does the enacting of palliative legislation for its removal. The adequate alleviation of these ills can be brought about only by a political party having Socialism for its object. So long as the powers of administration are controlled by the capitalist class so long can that class render nugatory any legislation they consider to unduly favour the workers.”

No critic can deny that this line of policy has volumes of the Socialist Standard which are completed with this issue. It was our policy then and it is our policy now, and will remain our policy till the workers come by their own.

Their Policy now and Then.
As the official organ of the Party, the Socialist Standard has, therefore, consistently voiced the interests of the working class during the time when it is more than ever necessary to do so since in general those interests are yet denied or unrecognised by the very class they mostly concern. It must, however, frankly be admitted that there are quite a number of working-class “leaders” who are prepared to tell the workers the truth about their position when it pays, but the trouble is that it does not always or even usually pay in the ordinary sense; which may explain the gyrations and inconsistencies of so-called Socialists who, for example, will say at one time that the capitalist class cannot and will not abolish unemployment, yet who will at another time take the lead in an appeal to the capitalist class to put an end to unemployment, the corner-stone of the very system upon which it lives.

The attitude of BY-ENDS toward Christian bears considerable resemblance to the attitude of many of these “leaders” toward the consistent Socialist.

“Why, they,” said BY-ENDS, " after their headstrong manner, conclude that it is duty to rush on their journey all weathers; and I am for waiting for wind and tide. They are for hazarding all for God at a clap; and I am for taking all advantages to secure my life and estate; They are for holding their notions, though all other men are against them; but I am for religion in what, and so far as the times, and my safety will bear it. They are for religion when in rags and contempt; but I am for him when be walks in his golden slippers, in the j sunshine, and with applause.”

The race of BY-ENDS is unfortunately far from being extinct. 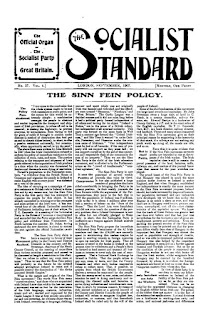 Editorial from the September 1907 issue of the Socialist Standard

It is curious that in the song of triumph that was sung by nearly all the "labour” papers on the election of a “Socialist” in the person of Grayson, scarcely a mention was made of the programme upon which the election was run. The Westminster Gazette, however, printed the address and was moved to remark in its leading article that Mr. Grayson’s “actual proposals, as they appear in his election address are somewhat milder than his theory seems to require.” When an orthodox Liberal journal comments thusly, the reason the journals supporting Grayson did not publish his address becomes apparent

After describing himself as a Socialist, which his programme denies, he puts forward these vote-catching proposals: “The Right to Work,” forsooth. Old Age Pensions, Taxation of Land Values, Free Trade; he says he “would resist any interference with our present Fiscal System;” “Free Maintenance,” which may mean anything from soup kitchens to children’s barracks; “Abolishing rather than admonishing” the House of Lords, Progressive Income Tax and Temperance Reform. But readers will be interested to learn that his “most immediate and enthusiastic support ” is to go “to a measure according women the vote on the same terms as men.” Not even adult suffrage! A revolutionary programme indeed. How the Liberals must have trembled to find their opponent stealing their planks and doing their work!

The Fraud of Reform.
A Socialist knows that reforms or measures palliative of capitalism can only be obtained while the master class rules in so far as capitalist interests are thereby served; and since capitalist interests are directly opposed to those of workers in all essential points of wealth and leisure, it is obvious that the measures passed by capitalist representatives will have for object the maintenance or extension of their system or the intensification of the robbery of the workers upon which they depend. It is then a fraud for a candidate to pretend to be able to obtain measures in the workers’ interests from the capitalist class in power. The workers can get nothing of their own until they are able to take it. No man is a Socialist who throws out such fraudulent sops or promises as bait to prospective voters, for besides that it must lead workers to disappointment and apathy and aid their enemies, it is obvious that as far as sops or promises are concerned the master class can, and does when it needs to, always outsop the would-be member. Hence it is of supreme importance that the workers rely upon themselves and concentrate all their energies on the capture of political power for Socialism, for all else is illusion.

A man is not a genius or a Socialist because he calls himself one. and wild appeals to sentiment as in the case of Grayson can never do the work of Science. No election run to further Liberal measures can be a victory for Socialism, for before the workers can emancipate themselves or use in any way the industrial and political machinery to their advantage they must wrest political power from the master class.

I.L.P. Intrigue
E. R. Hartley of the I.L.P. etc., who actively supported Grayson, lets the cat out of the bag in his account in Justice of August 3rd of the Colne Valley victory for confusion. He said that the men of Colne Valley would not have a nominee of the L.R.C. and—

This so displeased the wire-pullers that they used every power they possessed to prevent a candidate being ran. It is more than probable if Jarrow had been lost the I.L.P. executive would have refused to give their backing to the Socialist candidate.
One fact stands out for all to see—the I.L.P. ran a candidate for Parliament, and their chairman sulks in his tent because he cannot have his own way.
Shades of Democracy!
There is not a politician in either the Tory or Liberal Parties who is half such an autocrat as the chairman of the I L.P. and the secretary of the L.R.C. At the General Election a small group arrogated to itself the right to say where candidates should be ran; now it has resolved itself into one man who is going to decide.
When all the backstairs work was done and the winning of Jarrow forced the hand, it was still possible to try and wreck the election, in order to prove how wise and far-seeing was the opposition.
The chairman of the I.L P. sends no message wishing success to his own party’s candidate.
The secretary of the L R.C. prevents the Labour M.P.’s going to help. Philip Snowden is permitted to go just “to save their face," and the other I.L.P. members of Parliament are conspicuous by their absence.
If the members of the I.L.P. understood the meaning of democracy Mr. Ramsay MacDonald would not be their chairman for another month.
The action of the men who seek to dominate the Socialist movement has received a check, but it is idle for the Socialist movement to shut its eyes to plain facts.
We were all anxious to get some men into Parliament. To anyone who would spend a half-hour in thinking it was quite obvious we could only get our men in with the assistance of one of the great political parties.
Toryism, with its great majority was useless, but the Liberal Party, in its weakness, was only too ready to come to terms.
No arrangements were made, the rank and file would not have stood that; but in a number of constituencies an understanding was arrived at where for a double-membered constituency one Liberal and one Labour man were ran, with what Hardie himself described at York as the common object of knocking out the Tories.
When the "understanders'’ had got their places fixed up, they began a campaign to prevent any further candidates being run.
Nothing succeeds like success, and these tactics were more successful than anybody dreamed they could be. The very success, however, brought further complications; the I.L.P. contributions to the funds are less than £100 and their members’ salaries £l,400. While the trade unions are bound to admit their members won their seats mainly through the propaganda of the Socialists, it must be admitted their contributions to the maintenance of the I.L.P. members is on a liberal scale.
Perhaps it will now be obvious why the L.R.C. would not endorse another Socialist candidature and why it is very unlikely they will endorse any in the near future.

The above admissions should be noted, for when we point out similar things we are said to be abusive. But the truth of them cannot be disputed and they are eloquent of the condition of things within the "Independent” Labour Party.