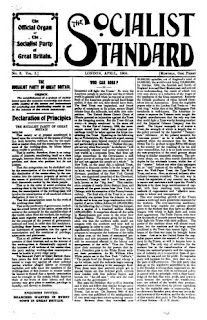 From the April 1905 issue of the Socialist Standard

Many of our young speakers do their best, and are still disappointed. We can give them one or two tips which, if followed, will assist them.

The very first essential to making a good speech on any question is to have an implicit belief that the side you are talking on is right. That essential is already possessed by all our speakers.

An old friend of the writer, probably the greatest Socialist speaker in America to-day, once said to him: "My boy, the Worker gets here Friday. On Friday evening when I get home from work I sit me down and read the Worker —every word in it; not the headlines only, not the articles only of news, but every line — and then I know what is doing in Socialism, and I know what to say and how to say it.”

Young speakers particularly should do this. But they should not stop there. Read a book now and then. Read a book worth the reading, and read it carefully. When you have read a chapter, stop and recall all the meat of it that you can. If there is some important part of it that you do not understand, or cannot recall clearly, go back and look it up. Learn to remember things that are worth remembering.

Not only read good books. but if you are a young speaker, read them aloud. Watch yourself. You will be surprised how many words you fail to pronounce distinctly, clearly. When you do that go back and read the sentence over again and again, as many times as may be necessary to enable you to acquire a habit of speaking in a clear tone and sounding every syllable of a word — no slurring.

If you will do these things — inform yourself on the subject, saturate yourself with it, read aloud, clearly, distinctly; read good, well-written books, so as to get the habit of speaking correctly, strongly, elegantly — do these things, and there is no reason why a young man of strength and good lungs and voice should not become not only a speaker, but an orator.
The Worker 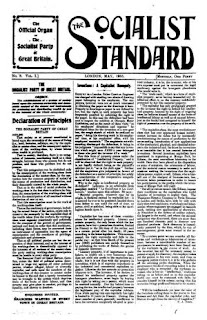 From the May 1905 issue of the Socialist Standard

The Socialist Party of Great Britain has often been charged—and rightly too—with being a party of political Ishmaelites. It is so because the only logical position in the political world that a genuine Socialist party can take up is that of opposition to all other parties. There is room for but one Socialist party in any country and, therefore, we cannot be in opposition to ourselves, and we must be in opposition to all other political parties. Thus we have to stand out clearly and distinctly from other “Labour" or "Socialist" bodies in this country. There is not one of the multitudinous array of these that we cannot at once show, by the position it takes up, to be in opposition to the principles of Socialism, and acting, consciously or unconsciously, as the catspaw of the capitalist-class. For any party that dares to claim the support of the working- class is acting as their enemy if it does so on any other ground than that of a clear recognition of the class war that is being waged in all civilised society, and that the goal of those workers who are acting their part consciously in the class war, must be the complete overthrow of the capitalist system of private ownership in the means of life, with its method of production for profit. This goal can only be attained by the capture, peacefully or otherwise, of political power, national and local, by those class-conscious workers, so that by its control they can substitute public for private property, and co-operative production for use for production for profit, and thus transform the working class from being mere hewers of wood and drawers of water for the parasitical capitalist-class, into the nation itself.

By this change in the basis of Society the workers will have destroyed the power by which they are kept in their present position of wage-slavery, and it naturally follows that the capitalist-class., as such, which exists because of this power, will have ceased to exist. The civilised nations then, instead of being divided into two classes—workers and capitalists—will contain but one class, a working-class, which will be the nation itself. All history of society, from the breakdown of primitive communism (a system of common ownership of the necessaries of life) is but the history of class struggles between those who controlled the means of life (and because of that fact dominated all political and social institutions) and those who did not own these means. In every instance where society has progressed, it has only done so because the underneath class has overthrown the class above it, and has substituted the particular political system best suited to its particular method of building and producing the necessaries of life, until now, for the first time in the world's history, society has reached the stage where all the means of life are held by the capitalist-class, and, on the other hand, the workers own nothing but their power to labour. The working-class can only free itself from its ignominious condition by the overthrow of the capitalist class and system. By virtue of the fact that the working-class is the last class, that is, that there is no class below it that can possibly be subjected: working-class emancipation is the emancipation of all mankind. That emancipation can only be accomplished by the establishment of the Socialist Republic. Any party that has less than this for its object is not worthy of the support of the workers. Any party that deludes them into believing that the re-legalising of the strike or picketing, or the safe-guarding of Trade Union funds, or anything short of the establishment of the Socialist Republic will be effective is acting as the enemy of die working-class, confusing the only issue that is of importance, and so assisting to perpetuate the capitalist system, with all its infamies. The only principle on which a working-class party can progress is on the lines of the class war, and strenuous opposition to any party not based on those lines. Thus The Socialist Party of Great Britain resolutely opposes Liberal, Tory, “Labour,” and all those, including certain professing Socialists, who, directly or indirectly, support capitalist politics, which comprise all politics other than the revolutionary politics of the Socialist party.

The position taken up is based upon sound and logical conclusions, and is supported by science, whether it be in history or economics, and, what is still more valuable to the “practical" English mind, is supported by political experience as well. Because we oppose all political bodies, especially those claiming to be "Labour" or "Socialist" which are gulling the workers by their cries of "something at once," cries which have simply had the effect of leading them into the political shambles of capitalist reform politics, we have been dubbed the “Political lshmaelites.” May we always deserve it! The principles on which the working-class must organise demand this policy, and as the only party here that is based on these principles and has this policy is The Socialist Party of Great Britain, we call upon those of the working-class who desire emancipation to enrol themselves in our ranks, to form the nucleus of the revolutionary army of the workers, to prosecute the class war to the successful issue of the Social Revolution.
E. J. B. Allen