From the September 2008 issue of the Socialist Standard

A hundred years ago this year Emile Zola’s remains were transferred to the Pantheon in Paris.

On 4 June 1908, a horse drawn hearse carrying a coffin containing the six years dead corpse of novelist Emile Zola was led through the streets of Paris. Hundreds of police and troops were drafted in to control the huge hostile crowds. After lying in state overnight, the bones of the ‘maître’ were interred in the Pantheon, the resting place of the great and good of France. The ceremony was solemn and dignified, but immediately afterwards violence again broke out with a determined assassination attempt made upon a certain army officer who had become a close friend of the dead man. The violent and bitter sentiments which had accompanied Zola’s life continued after his death.

Emile Zola is principally famous in Britain for his obscenity. Indeed Zola was the only writer to have his works outlawed in this country in the nineteenth century. In the parliamentary debate leading to the ban Samuel Smith, MP for Flintshire commented: “Nothing more diabolical has ever been written by the pen of man; they are only fit for swine, and those who read them must turn their minds into cesspools.” Even in his own country Zola was equally loathed: “No one before him has ever created such a heap of filth. That is his monument, the greatness of which no one can contest. Never has a man made such an effort to vilify humanity, to insult every aspect of beauty and love, to deny all that is good and decent” wrote Anatole France in 1887. A casual reading of a selection of Zola’s novels would indeed would give this impression. Some of the scenes in his books are as bawdy and shocking as they were when written in the supposedly repressed nineteenth century. Yet the graphic sex and violence serves a purpose. For Zola was a man with a social conscience, not a revolutionary certainly but certainly a radical reformer, which is reflected in his writings. And it is as a propagandist that Zola must be primarily of interest to the socialist.

Born in Paris in 1840 but raised in the small town of Aix en Provence (portrayed as Plassans in many of his novels), Zola was the son of a civil engineer of Italian origins. His father died when he was just small and thereafter the family had little spare money. When he was 18, Zola moved to Paris. A failure as a student, Zola got a miserable job as a clerk, which he soon gave up to devote his life to poetry. Zola attempted to dedicate his life to romantic poetry but found there was no possibility of earning a living from it – indeed at this point in his life he was living in a ramshackle garret trapping and eating sparrows to survive. Instead he turned to journalism from whence he learned the value of sensationalism and the importance of the exposé.

Zola however had not given up the literary life and within a few years had written his first novel. His earliest novels were a form of experimentation in ‘materialism’ - demonstrating supposedly ‘scientific’ theories through literature. Madeleine Ferat (the ‘imprinting’ of a woman with first lover) and the racy Thérèse Raquin (the predetermination of events by innate ‘temperaments’) date from this time. In fact there was nothing scientific at all about these novels as the evidence was, as indeed it would be in a novel, manufactured and the theories mere pseudo-scientific garbage.

The main product of Zola’s literary career was the twenty volume Rougon-Macquart cycle, begun in late 1870 and finished a quarter of a century and 2,500,000 words later. Basically the series was intended as a hatchet job on Louis Napoleon and his Second Empire as experienced by the respectable Rougon family and the unmentionable Macquarts. The collapse of the Empire within a year of the commencement of the cycle did not however render the works of mere historical interest, because social and economic conditions did not materially alter under the Third Republic and thus the Rougon-Macquart became a general condemnation of contemporary society. The Rougon-Macquart is the first great family saga in literature but each novel can be read individually and many readers are not aware that there even is such a series.

The first few volumes were badly received, despite the literary merits of for instance La Ventre de Paris (“The Belly of Paris” known as The Fat and the Thin in Britain). Only with L’Assomoir (published under various titles in Britain, including The Dram Shop) in 1876 did fame arrive. This classic tale of the effects of alcohol was meant as a criticism of the slums (“My novel is simple enough. It relates the downfall of a working-class family ruined by its environs”) but struck a cord with the public and became a perennial hit with the temperance movement. The use of slang and the real attempt to portray working class life was inspirational (“If you wish to have the same sources of inspiration as the ancients, if you wish to rediscover the breadth of the heroic ages, you must study and depict the common people”) and a real eye catching novelty.

In 1880 Zola followed up this success with Nana. With its graphic depictions of high level prostitution, Nana made Zola not merely notable but truly notorious. Yet this was a deeply moral book with a high purpose. A puritan in real life (even his mistress seems to have been acquired with the sole purpose of reproduction) Zola uses the book as a warning against vice among the leaders of a nation, as a cause of military defeat and destruction both personally and nationally. The intention was to make plain the disgusting hypocrisy of the regime. 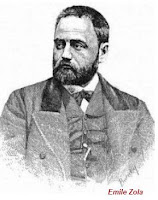 In 1885 came the most notable of Zola’s books to the modern reader and one which has pride of place in every worker’s library, the classic Germinal. Written from 2 April 1884 to 23 January 1885 and originally to be called Red Harvest, Germinal tells the tale of a strike in the coal mining area of north east France as seen through the eyes of Étienne Lantier, an outsider. Very violent and explicit in places, Germinal brilliantly depicts the effects of the vast impersonal force that is capitalism and the misery and oppression it brings to everyday life. Zola made his intention in writing the book clear: “everything must follow on logically, starting from little factual details, from the original unhappiness and suffering, the cause of which is universal, and traceable to the unknown social factor, the god Capital, crouching in its temple like a fat, glutted beast, monstrous in satiety; all that taking place not by the desire of the masters that I show on the stage, but arising from a state of affairs beyond their control and determined by the age.” As with other works he did not suggest remedies but regarded his mission as merely to publicise the problem: “Germinal is a work of pity, and not a work of revolution”. Long acknowledged as one of the great classics of French literature, Germinal is the only work of Zola to be continuously in print in Britain. Interestingly Germinal was not the best selling of Zola’s novels at the time coming sixth after Nana, La Terre, La Débâcle, L’Assomoir and the dreadful Lourdes.

In La Débâcle of 1892, Zola virtually invented the war novel as the earlier La Bête Humaine had the railway murder story. La Débâcle was a well-researched story of the Franco-Prussian war. Its treatment of the Communards was, given Zola’s radicalism, surprisingly negative and very far from objective.

The following year saw the conclusion of the cycle and Zola at the height of his literary fame. A contemporary noted that the publication of a new Zola was “a boulevard event looked forward to for days previously. On the mornings of publication huge piles of the yellow-backed volumes may be seen heaped up on the stalls of booksellers, and by noon the boulevard is flecked by yellow spots as people hurry along, each holding in his hand the eagerly purchased volume.”

Zola, having completed the Rougon-Macquart, was at a bit of a loss of what to do next. A series of controversial anti-clerical novels followed. However he was most famous at this time for his role in the Dreyfus case. Essentially Dreyfus, an upright but standoffish Jewish army officer, was made a scapegoat by aristocratic army officers unjustly accused of espionage. Zola liked a good fight and had an eye for self-publicity but the Hitchcockian scenario of a man accused of a crime he had not committed would have appealed to his humanitarian sentiments. The series of deliberate forgeries and the extensive cover up by the military revealed the extent of anti-semitism in France and Zola’s forthright support of an unpopular cause made him the most hated man in France virtually overnight. The death threats and persistent mobbing sent Zola into temporary exile but Dreyfus was ultimately exonerated although Zola never regained his former popularity.

The experience further radicalised Zola, perhaps because of the staunch support given Zola during the Dreyfus case by the French leftwingers, and within a few years he became viewed as a socialist. His political views in this period can be particularly seen in Travail (work). Based on the Fourierist (utopian socialist) ideas he came into contact with at the turn of the century, Travail is Zola’s only work of science fiction and depicts a harmonious society without government or classes, where free love reigns and religion has died away. Travail is far from being the French News From Nowhere however. Zola’s brave new world originates in local experiment rather than revolution and is based on the voluntary (!) cooperation of capital and labour. Unlike earlier utopian socialist schemes, the Travail commune is based on a steelworks rather than agriculture but the Fourierist origins are still rather obvious – the commune is termed the Crècherie, not much different from Fourier’s five fingered phalanstery.

Zola was found dead of carbon monoxide poisoning in his flat in Paris on 29 September 1902. There have been persistent rumours of a deliberately blocked chimney and the death was certainly odd. If it was murder, demise at the hands of the anti-Dreyfusards in the cause of justice would have been no shameful death.

Zola’s work is difficult to summarise. Despite the self-applied labels of ‘Realism’ or ‘naturalism’ there is much that is unrealistic and unnatural about his novels. But art is not a mirror and the ability to create characters larger than life and the extensive use of allegories and symbolism inject an epic tone into the drab real life world comparable with the Coen Brothers films. The melodrama and seemingly endless descriptive passages are perhaps not much to today’s taste, but are preferable to the insipid ‘chick lit’ of modern times. Although some of his work was created purely for entertainment purposes, Zola’s main aim was to use the form of the novel to raise awareness of social problems: “My novels have always been written with a higher aim than merely to amuse. I have so high an opinion of the novel as a means of expression that I have chosen it as the form in which to present to the world what I wish to say on the social, scientific, and psychological problems that occupy the minds of thinking men” (quoted in EA Vizetelly’s Zola in England). As such works such as Germinal were greatly successful at the time, although are perhaps now a little dated. Perhaps the main lesson to be drawn from Zola is that the best form of propaganda is that which is not seen as propaganda – a maxim we would all do well to pay attention to.
KAZ
Posted by Imposs1904 at 11:48 PM 1 comment: