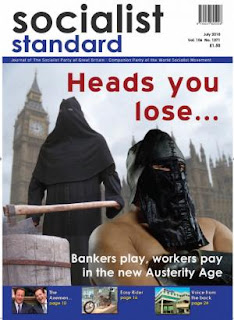 Editorial from the July 2010 issue of the Socialist Standard

The ‘savage cuts’ in spending by government departments, cuts in housing benefit, a two-year pay freeze for public servants, less indexation for welfare benefits, price increases due to higher VAT, announced in the 22 June Emergency Budget, and openly trailed as inaugurating a new ‘Age of Austerity’ and ‘years of pain’, confirm that the role of governments is to run the state machine in the general interest of the capitalist class, the tiny minority of super rich who own and control the means of wealth production. That governments really are the ‘executive committee of the ruling class’ that Marx said they were.

In fact, in a throwback to the 19th century, this particular government is overwhelmingly composed of members of the ruling class (see back page). And these millionaires have the cheek to tell us that we must tighten our belts and change our way of life while – even, so that – theirs can continue.

In reducing corporation tax the Chancellor followed the advice of a fellow Tory writing in the Times (17 June) to choose “the interests of employers and wealth creators. That won’t be popular but healthier businesses – free of tax and red tape – are essential for generating tax revenues, exports and new jobs.”

Note the arrogance of these people in describing themselves as ‘wealth creators’ when in fact it is employees, not employers, who create wealth by transforming materials that originally came from nature into useful things. What employers do is organise that the maximum amount of this newly-created wealth goes to their business as profit.

But the Tory did have a point. Under capitalism the engine of growth is capital accumulation by businesses and this is fuelled by profits. In this sense, tax receipts and jobs do depend on profit-healthy businesses, even if only as by-products which are used to try to convince the general public that it is in their interest that priority should be given to profits.

That priority has to be given to profits at the expense of the living standards of working people and their dependants is confirmation that capitalism is a system that does not work in the interest of the wealth-creating majority, only in that of the profit-taking minority. Which is why it must go.

In the meantime we have to live with it. That doesn’t mean we have to take what the government has planned lying down. The precise cut in our living standards is not something the government can decree. It depends on how determinedly we resist. In other words, on the class struggle. But, since the cards under capitalism are always stacked against us, this will only be a defensive, rearguard action to try to stop things getting worse.

Yet another reason why we should be organising, not just to limit the damage, but to put an end to capitalism and usher in a society based on common ownership and democratic control of productive resources, so that production can be geared to satisfying people’s needs instead of being subordinate to making profits for the few.
Posted by Imposs1904 at 9:43 AM 1 comment: