Do I care that Diana Spencer was killed in a car crash in Paris? I do, but not to order and never in the way I am expected to care. In almost all cases we humans are saddened by death. We know that without any doubt we must all come to an end and to know how this will take place or where or when is probably at the back of most of our minds. But I find it incomprehensible that I should be expected to grieve to distraction over a woman I have never met, was never likely to meet and had no desire to meet. Not only that but I now find that an assumption is made that I will automatically become involved in some of the sickening hypocrisy that we have all witnessed in the wake of her death, and I must say I find this deeply insulting to my intelligence.

If Diana preached that we should not discriminate against people with AIDS, so what? If she told us that land mines should not be used to kill civilians, so what? Is there something intrinsically clever or wise about this? So many of us have said the same. But Diana was listened to and admired because like everything else under capitalism she had been "packaged", her money and her position entitling her to be "right" in the eyes of those people who are impressed by such things.

She was a princess and princesses, unlike other people, apparently, KNOW these things. Wealth had made her attractive and interesting, ensuring therefore, that when she spoke about AIDS victims, the homeless children, then she would be taken much more seriously than when we lesser mortals give voice on similar subjects.

So only the successful and the wealthy have that priority of wisdom, while the rest of us are seldom consulted except for one day every five years when we have the dubious honour of being invited to put a cross against the name of some remote person who knows and understands less than we do.

So what is it about human beings that they often cannot differentiate between what is real and matters and what is cosmetic, contrived and overly sentimental? Centuries of conditioning must be one of the reasons why the human race resorts to adulation of the rich and the powerful, the sages, the clever ones, those who know what is best for us, whom we allow to enslave us, resulting in an almost innate inferiority. The media and the system under which we all live encourage this. It is to their advantage.

Many of us will have worked all our lives to change this system of society, while others believe that belonging to a trade union or joining the Labour Party will increase the chances of a better life for the working class, believing that reform will bring about change and benefit us all. Socialists know that only by eradicating capitalism can we begin to redress injustice and poverty and look towards a sensible and rational life for us and our children and their children.

Meanwhile, my heart aches for those who do not dare to trust their own judgement, who fawn on the shallow figures in our society and make gods and goddesses of them because they have never considered that the power to change what is sick in this world lies in their own hands. 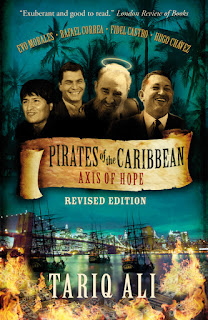 Book Review from the September 2007 issue of the Socialist Standard

A need to "counter systematic disinformation by the corporate media networks" coupled with the "revival of hope and the emergence of a modest alternative to the status quo" is the stated motivation for this book. One wouldn't expect neutral views on any topic from Tariq Ali, but however strongly he presents them they are backed up with ample evidence of and references to the truths he is presenting. What one would expect and what one gets is a well-written, clearly argued book exploring the growing movements (mainly in South America) against the Washington Consensus which "can allow no enemies of globalization."

Included is a reminder of the ravages of primitive accumulation affecting the whole continent; a brief history of Venezuela's politics, dictatorships juxtaposed with spells of democracy and the odd coup thrown in; military control; states of emergency; mass protests following IMF restructuring; massacres and decades of exclusion for 80+ percent of the population. The background to the founding of the Bolivarian groups (in the army and air force starting in 1978) by young army officers including Chavez. Ali's sources telling of the programme of political interventions in Venezuela are many, including one 1960s senior CIA officer. He lists books, documents and websites for those wishing to delve further. Two of the many interesting footnotes, one re: V .S. Naipaul's refusal to be drawn into the disinformation racket after the 2002 coup attempt and the other re: a soon to be published book by Gregory Wilpert which totally supports "with a wealth of facts" the Irish documentary film "The Revolution will not be Televised."

Ali is overtly supportive of the moves in South America against the Washington Consensus and points to the ways the balance of power is changing.

There is a section on Bolivia outlining the struggle of the people to oust Bechtel and their water privatization scheme described as the democracy from below that is feared by neo-liberal elites everywhere. Also offered is an insight into Evo Morales' search for "a form of radical social democracy that is totally unacceptable to the Washington Consensus and its institutions." Ali suggests we should all look at strength in unity (e.g. Cuba, Venezuela, Bolivia), "All Andean paths that divert from the neo-liberal motorway will be worth exploring." He gives some details of his first trip to Cuba in 2005 and reminds us of the 1962 Second Declaration of Havana expounding that their struggle was continental and anti-imperialist, as Chavez and Morales say now. Visiting the University of Information Technology he discovered Richard Stallman's free software GNU/Linux to be the system of choice. When Ali met Stallman earlier in Caracas, at which time Stallman was 'Linuxing the country' and looking to do the same in Cuba, Stallman told him that China, too, had been very interested until they learned they couldn't charge users for the facility.

The appendices prove informative too, with first-hand information, straight from the mouths of several involved horses, information we are not privy to from the general media. Evo Morales' speech 'In Defence of Humanity' in Mexico City talks of ending selfishness and creating solidarity and mutual aid, of organizing and uniting against the (neo-liberal, imperialist) system, of strengthening the power of the people. The messages from this book are rousing, loud and clear, if, unfortunately, they are not the whole story; end of neo-liberalism and of empire, but no mention of the end of capitalism. According to Tariq Ali, "Hope has been reborn and that is half the battle won." However inspirational it may be socialists suspect that this will in all likelihood be another triumph of hope over experience.