Report from the September 27th 1966 issue of the Hackney Gazette

An interested audience heard college lecturer Anne Young describe her impressions of an eight weeks tour of the United States in the course of her recent lecture on "My American Journey," at Hackney Trades Hall, to the Socialist Party of Great Britain's Hackney branch.

She had conversed on a diverse range of subjects with Americans of many different types, ranging from housewives to University professors, said Miss Young.

She was received with enthusiastic hospitality by members of the S.P.G.B.'s Companion Party, the World Socialist Party of the U.S.A., which this year celebrated its fiftieth anniversary. Extremely active, its membership is widespread and its views highly respected. It had recently acquired an influx of keen youthful members. Its official journal The Western Socialist was displayed in many public and University libraries and regular radio broadcasts by the Boston branch, brought the message of Scientic Socialism to several million people.

Negro integration problems, she continued, were becoming acute in the North. Riots arose from slum conditions, poverty, frustrations and hopelessness of the young Negroes, many of whom were well-trained, but could not obtain jobs. There was little integration in housing, although Rich Negroes, who looked down on their poorer brothers, were being accepted in the better-class "white" neighbourhoods. The Negro problem was more a class than a race problem. In the South liberal intellectuals, pained by charges of ill-treatment of Negroes claimed, with justification, that the economic plight of Negroes in the North was worse.

"Immature Workers"
American workers are industrially very militant and their unions efficient, but politically they are immature. The recent airline strike was settled favourably to the employees and now pay claims in a wide range of industries were being made and many strikes expected. Prices are high and rising. Many workers do two jobs to earn enough for better amenities and to educate their children. Much buying is done on credit. Job security is low, employment contracts are mostly yearly and many workers speculate on a small scale on the Wall-street Stock Exchange, imagining themselves as capitalists and hoping, like British workers with football pools, to gain fortune and security.

U.S.A, like Britain, is experiencing a balance of payments crisis. A television speech by President Johnson sounded, word for word, like a speech by Harold Wilson, with the accent on more production, harder work, more saving and wage restraint. There was however a considerable hard core of unemployment in some areas. Many school-leavers could not obtain work and children were encourage to remain longer at school.

The Vietnam War, she claimed, was really a conflict with China over control of the wealth of South-East Asia, and was causing much rebelliousness among youth. Many, who could afford it, sent their sons to college University thus avoiding conscription. Many Negroes and poor Southern "whites" had been drafted in Vietnam. Anti-war feeling was rising with the increase of casualties, but, despite the gravity of the situation and the opposition of Robert Kennedy, it was likely that President Johnson would retain the support of the electorate.

"The American workers face the same problems as workers wherever Capitalism holds sway. They strive for a lifetime to achieve security. The acquisition of money continually dominates their thinking. Blind to the basic realities of the Capitalist system, they have yet to learn that their problems are inherent in it and can only be abolished by ending the social system which breeds them, and replacing it by World Socialism, a moneyless, classless society."
Posted by Imposs1904 at 6:40 PM No comments: 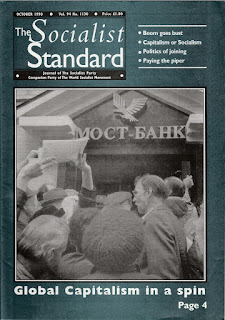 From the October 1998 issue of the Socialist Standard

Those who know us must have noticed that we don't go out of our way to recruit members. Some would say we do just the opposite. At first sight, we seem to have the oddest approach to recruitment of any political party in existence-we have a test for membership.

Applicants are only accepted if members of a branch, not excluding those who joined the week before, are satisfied by the answers to their questions about what we stand for, and the applicant's understanding of it. Now what we stand for isn't particularly hard. We often say that it's easier to learn than the rules of football. But hard or not, why do we insist on this test? Surely it must put some people off? Well, that may be, but we can't help it.

One can always dismiss this peculiar feature of our case-and the test of socialist understanding itself is part of the case-as mere sectarian elitism. Perhaps, like the People's Front of Judaea in the celebrated satire Life of Brian, we simply don't want people to join, and we don't want to grow, because that would spoil our little club, as it were. Our detractors will certainly say this, and worse.

But let us consider for a moment what happens when people join other groups which don't have this test. Actually, they face a test nonetheless, and one which takes a lot longer and is far harder to pass than ours. For a significant sub-text behind every statement and action that members make in these groups is the exchange of political credentials. In this subtle transaction, which may take any number of forms, the objective is always the same, that the individual is perceived as being "all right". The individual is therefore judged by the group according to a range of what might be called "credential indicators".

Why does this "judging" process take place? Simply because every group is afraid of internal divisions which might destroy it-one reason why debate may be actively avoided-and credential indicators can be viewed as a kind of defence mechanism against this. Power and influence is universally denied to new members, whether officially or unofficially, until judgment is reached, and judgment can take a long time when indicators are unvoiced, subtle, multifarious and hard to inspect. In addition, counter-indicators may be present, or arise accidentally, which will further delay conclusions and further marginalise the member.

So what are these indicators? Obviously the most appropriate of these are the "theoretical" ones. For example, saying that you hate capitalism is a powerful credential indicator to another anti-capitalist. But taken alone it is inconclusive. After all, some fascists claim to be anti-capitalist. Or you might just like the idea of feudalism. Similarly, being against the money system does not exclude the possibility that you favour a barter system-a retrograde step-and being anti-state is a sentiment shared by many rightwing freemarketeers. Animal rights might imply you care nothing for human rights while eco-politics might, or might not, ignore the concept of class struggle. What is needed of course is a coherent approach, but in groups where formal debate is not regularly practised this is very often lacking.

Unofficial indicators
In place of or supplementary to formal "theoretical" indicators one can often find other indicators which may be even more powerful for being unvoiced. Dress can be a strong credential indicator. In groups where young people predominate, the habitual styles of dress will tend to become familiar, and departures from these styles-say a three-piece suit-will stand out as incongruous, odd and perhaps suspect. Older people with differing dress styles therefore present the wrong indicators to such groups.

Language and dialect have been used, especially in Britain, where accent denotes cultural status to a great extent. If the group ethic leans heavily towards the stylised "working class" image, posh accents and Received Pronunciation (i.e. BBC English) are definitely out. This can give rise to speech changes among members.

These two powerful credential indicators work more at the unconscious than the conscious level. Nevertheless new members may be acutely aware of them, and, feeling that they are perpetually on trial, be disposed to change their behaviour, language and dress in order to fit in. This can then give rise to phoney displays intended to impress, and self-conscious reluctance to speak out or assert oneself.

An indicator which is, by contrast, highly articulated, is education, or rather erudition in theoretical matters relating to the group. If the way to be accepted by the group is perceived as being this kind of expertise, the group will not attract anyone but amateur academics who are constantly trying to prove how clever they are.

There are any number of other indicators that may be applied. Even musical taste can be used, or social mannerisms, or background, or income. But very rarely do they spring from deliberate and dishonest policy on the part of the group. People don't mean to keep checking each other out, but it is inevitable that they do so, because the process of social bonding requires a measure of trust and mutual compatibility that makes effective organisation possible.

One indicator is quite deliberate, however. Heavily in use by the leftwing is the indicator of commitment. According to this indicator, hard work and obedience by new members is the main criterion of trustworthiness in the organisation. In these hierarchical, "top-down" groups the leaders wish at all costs to remain the leaders, and reward only those with proven commitment to the "party line" with preferential treatment, more responsibility and more say. New members who present the wrong indicators remain peripheral to the party structure, and finding themselves unable to influence decision-making at any level, eventually give up and leave, often embittered by the hard work they put in and the hollowness of the party's claims of equality and democracy.

The Socialist Party does not need these indicators, because we choose to get the whole business done with and out of the way first, upon application to join. As far as we are concerned, our test of socialist understanding settles the matter once and for all, and in an honest and friendly way. Even applicants who are rejected are strongly encouraged to continue the dialogue, and very often are accepted at a later date when the disagreements are resolved. Once a member, you have the same rights as the oldest member to sit on any committee, vote, speak, and have access to all information. Thanks to the test all members are conscious socialists and there is genuine internal democracy, and of that we are fiercely proud.

One other result of our test is that, whereas many groups are identifiably linked to social niches, it's quite hard to find two Socialist Party members who are alike in any respect apart from their political viewpoint. The first Party Conference any new member attends is invariably a revelation, as they gaze out at a motley assortment of tradespeople, pensioners, hippies, housewives, cockneys, academics, salesmen, musicians, unemployed, ethnic minorities, dockers and doctors. The "typical Socialist" doesn't exist, except in popular myth. This is as it should be, for all the above are members of the working class.
Paddy Shannon