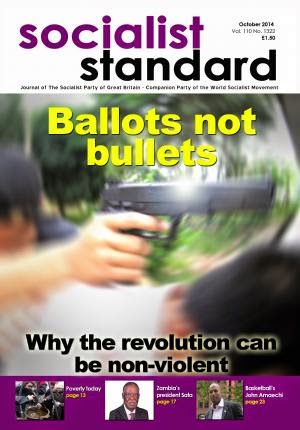 Book Review from the January 1911 issue of the Socialist Standard

Ten years ago a judgement in a certain trade union case was given by the section of the House of Lords known as the "Law Lords" that became world famous as the Taff Vale case.

It was an action by the Taff Vale Railway Co. against the Amalgamated Society of Railway Servants to recover damages in respect to injury arising from a strike of the railway men, and the judgement was in favour of the masters.

This case was one of the greatest factors in the building up of the Labour Representation Committee (now the Labour Party) and Richard Bell, then secretary of the A.S.R.S., was chairman of the Committee during 1902.

Time's irony has brought another Law Lords; decision against the A.S.R.S., but this time levelled at the Labour Party it was so instrumental in building up. And as if to complete the sarcasm of events, Lord Farwell is one of the judges in the last case, as he was in the first.

In the November issue of this journal were given the reasons this party agree with the Osbourne judgement—so-known from the name of the individual who brought the action.

The book under review tells us singularly little that the ordinary reader of the newspapers did not know, unless we except the appendix containing the judgement of the five Law Lords. But there is a good deal of what can only be described as cant, while one or two curious statements are made.

On page 5 we are told the author started "without organisation or funds, relying wholly upon the justice of the cause" (obvious cant) while on page 18 occurs this curious admission: "It now became evident that the matter must go to the Courts. In order to obtain some standing I came forward as candidate for Walthamstow Town Council, and was returned in April 1906."

The reader may wonder what this had to do with an action that Mr. Osbourne is continually telling us was a trade union matter. The following may increase this wonder—or dispel it.

"At the Walthamstow Council I had the good fortune to meet Councillor Wilkinson, a solicitor in the City of London, who agreed to take charge of the case." (Page 28.)

Mr. Osbourne was certainly a fortunate man, for on the same page we are told "For myself, I was entirely without resources, and had no knowledge of how or where to obtain money, but after six months of persistent effort I succeeded in raising £250," and on page 29, after describing how he had lost both his case and his money in the lower Courts, he says: "Owing, however, to the great generosity of my solicitor in trusting me to raise the money eventually. I was able to proceed with the case."

And we are told that, in the Court of Appeal "our Counsel realised that they were fighting, not only for the liberty of their fellow citizens, but for the very safety of our Constituion."

My word! and we had been unaware of the danger until Mr. Osbourne became the chosen instrument for our defence.

Throughout the book the term "Socialist" is applied to the Labour Party and its leaders. Yet Mr. Osbourne must know that the Socialist Party has denounced them as anti-Socialists and misleaders of the working class, because our Party had to fight the executive of the A.S.R.S. over the exposure of the latters' action in connection with the North Eastern Railway.

These misleaders have been very busy throwing out insinuations and sneers with reference to the source of the funds Mr. Osbourne obtained. They are, of course, fine judges of "curious sources" whence funds are obtained. But on page 58 Mr. Osbourne reprints a letter sent to the Morning Post and other papers (7th Oct. 1910), challenging the Trades Union Congress to appoint an independent investigator, but although at that moment busy abusing him, the Congress did not tale his challenge up. So far as the present reader has heard, they have not replied to his letter at all—a significant measure of the worth of their criticism.

Editorial from the December 1961 issue of the Socialist Standard

For Stalin, the final disgrace.

His simple grave now mocks the memory of the days when he was the great dictator, who could make Krushchev caper like a court jester.

It mocks, too, the memory of the fulsome praise that was heaped upon him when his pitiless rule was at its height. Here is part of a poem which was published in Pravda on August 28th, 1936:

And this is Krushchev himself, speaking at the eighteenth Congress in 1938 on the extermination of Stalin's opponents:


. . . Our victory in defeating the fascist agents—all these despicable trotskyists, bukharinists and bourgeois nationalists—we owe above all to the personal effort of our great leader, comrade Stalin . . . Long live the towering genius of all humanity, the teacher and the guide who is leading us victoriously to Communism, our beloved comrade Stalin.

Now that the truth about the "beloved comrade" is officially acknowledged in Moscow, we can expect some more rewriting of history, just as it was when Stalin wanted to eliminate the memory of his enemies.

In England the Communist Party will be in confusion for some time. Always taking their line from Moscow, they were among Stalin's worshippers, and disregarded the facts about the Russian dictator which Socialists, and others, put before them. The latest change of policy will be hard to swallow, even for them.

In the Kremlin the power struggle continues. Perhaps Molotov and Voroshilov will go as others have gone before them. Perhaps Trotsky will be posthumously reinstated. perhaps the Soviet government will gratify the historians who see similarities between twentieth century Russia and seventeenth century England by treating Stalin's corpse as Cromwell's was, after the Restoration. We can be sure that whatever happens will be excused in the name of the "Socialist Fatherland."

The Russian workers will probably accept this, in the manner of workers all over the world. How much more hopeful if they turned the belated denunciation of Stalin to good account. For what guarantee is there that Stalin's successors will be any better than the man they are now denouncing? None whatsoever. Yet the whole argument for having leaders must be in the assumption that they are beneficial to society. If they can turn out as Stalin did, the argument for them is destroyed. There is a lesson here for Russian workers and for those in other countries.

Let us repeat what we have often said before. The Soviet Union is not a Socialist country. It is a dictatorial capitalist country. Stalin was a dictator. So are Krushchev and his henchmen. All Socialist oppose systems like that in Russia.

Capitalism, whoever happens to be its leaders, can only bring misery and fear to the majority of people. It is useless to change one set of leaders for another. The real need is for the working class to gain enough knowledge to bring about Socialism.