In an interesting article on China in the Guardian (18 March) John Gittings  considered, among other things, where Deng's economic reforms are heading and why Mao's policies failed. He asked:

"What is meant by Mr Deng's famous phrase, used to justify his economic innovations, of 'socialism with Chinese Characteristics'? It is simply code , many suggest, for 'capitalism under the Chinese party rule.'"

Of course, what "many suggest" is spot-on, and Gittings adds that ordinary Chinese understand where Mao went wrong. They say: "Marx said that capitalism was a necessary stage, but Mao tried to skip it."

Marx expressed his view in his preface to Capital where he pointed out that a nation "can neither clear by bold leaps nor remove by legal enactments the obstacles offered by the successive phases of its normal development."

The Chinese Communists' short-cut to "socialism" was inevitably a blind alley, and they now have China on the road it was always bound to take—the road to capitalism.

"Clergyman was employed by Church, not God."

This headline appeared over a story in the Independent (16 March) about a clergyman who had been handed his cards by the C of E and was claiming unfair dismissal before an industrial tribunal.

The Church in its defence stated that the "minister of religion owes his primary duties to God, rather than his Church". Although the tribunal agreed it still in favour of the jobless one because his contract was with the Church and not the Almighty.

The story also revealed that the C of E's little ploy has been tried on several previous occasions by the Methodists, Presbyterians, etc.

Obviously, the tribunal's ruling has very wide implications because there are many, many Gods. For example, military personnel and prostitutes who may in the future claim unfair dismissal will not have to take Mars, the God of War, or Venus, Goddess of Love, to some earthy tribunal.

Many workers dream about becoming their own boss, and 170 Scottish miners thought they had realised this dream when they took over Monktonhall colliery from British Coal three years ago.

Alas, their dream has been disturbed. A seam fault caused production to fall below target, so management cut bonuses and one shift of worker-shareholders staged a wildcat strike.

This was not what these miners had expected: "When we bought into Monktonhall it wasn't going to be them and us. It was going to be just us" (Daily Mail, 10 March).

The Monktonhall chairman's answer was a bit less idealistic: "If this place is going to be viable we have to cut somewhere."

Workers may dream about a secure and strife-free life but the realities of capitalism's economics usually bring a rude awakening.


We don't deserve them

How shamefully an ungrateful society treats its Great Men. A case in point is Yasser Arafat, leader of the PLO, head of the newly-independent Palestinian state, and Nobel Peace prize winner.

Besides having to worry about the conflict between resident Arabs and Jewish settlers on the West Bank and the inter-Arab quarrels in the Gaza strip, he now has another worry on his plate.

According to a story in the New York Post, US Federal investigators are conducting a global search for his assets to see if the PLO's claim of poverty are true.

The investigators are looking into allegations that Arafat has access to huge assets including bank accounts, jetliners, factories and oil refineries. Hints of his wealth include a remark made by his wife in Washington last year, that it was difficult to run 12 homes.

She has to run 12 homes? Ye Gods, even this Great Man's poor wife isn't spared her worries!

There are over 170,000 registered charities in this country. Perhaps the most famous is Oxfam. Founded in 1942 it is still busy trying to raise funds to combat "hunger, disease, exploitation and poverty".

By any standards, it has failed miserably to deal with these problems, which far from decreasing are growing worse every day as capitalism spreads its tentacles throughout the world. As Oxfam itself says:

"Take Bangladesh: the world was shocked by the catastrophic cyclone and floods in 1991, in which 140,000 people died. Yet the same number of children are killed by poverty in Bangladesh every two months. The main killers are common diseases, often spread by dirty water, like diarrhoea. Worldwide, a mother watches her child die of diarrhoea every 8 seconds."

Only world socialism can stop this carnage. The existence of 170,000 charities is an effect of the poverty of capitalism, not its solution.
Posted by Imposs1904 at 4:51 PM No comments: 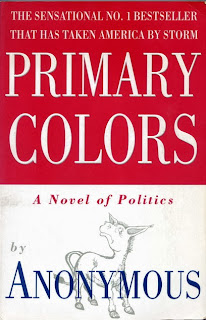 Book Review from the June 1996 issue of the Socialist Standard

Actually, despite all the hype, it's quite good. Whoever wrote it knows how to use words. They know how to stab politicians in the back too. Whoever wrote this novel clearly worked on the 1992 Clinton primary election campaign. They saw the man for the pseudo-caring, vulgar little swindler that he is. Read this novel and, if you ever did before, you will it hard to take Clinton seriously again.  This novelist does to Clinton and those like him what Tariq Ali's Redemption did to Tony Cliff and Ted Grant. Great stuff: all leaders deserve to be exposed in such nakedness, grotesque for all to witness.

The language of this novel drags vulgarity to new depths, but there is no sense of it straying from reality. The cynical role of the spin doctors is depicted superbly. Not that there are any longer specifically US phenomena: features of an uglier, inferior political culture. These days Major calls European leaders "a bunch of shits" and his cabinet colleagues "bastards". As for the power of spin, read Nicholas Jones's new hardback, Soundbites & Spin Doctors (Cassell, 1996, £17.99) or Margaret Scammell's Designer Politics: How Elections are Won (St Martin's Press, 1995, £15.99) to remain in no doubt that manipulating the media is now the key part of any successful election campaign in Britain. The old cry "that Britain will soon be as bad as America" has now virtually come to pass. Despite the insights of the accounts by Jones and Scammell, the sordid strategy of utter dishonesty, energised by almost complete contempt for those who vote, was most powerfully presented in Primary Colors—a work of fiction, but only just.
Steve Coleman

Postscript: It was revealed in July 1996 that the author of the novel was Joe Klein.