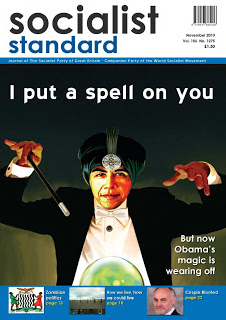 KICK 'EM WHEN THEY ARE DOWN
"Disabled people will be hit with more than £9bn in welfare cuts over the next five years, a think tank has warned. Demos suggests the government's plans will see 3.6m disabled people and carers lose about £9.2bn by 2015. It said moving those on incapacity benefit who were reassessed as fit to work to jobseeker's allowance would account for half of the losses" (BBC News, 9 October).

GRIM PROSPECTS
"A million people are expected to lose their jobs in the next four years as a result of the Government's decision to cut public spending by £83 billion, according to a report out today. Nearly 500,000 jobs are likely to be cut in the private sector as the Government stops building schools, hospitals and roads and cancels other contracts. This is on top of about 500,000 job losses in the public sector as employers reduce budgets by about a third and lay off civil servants, town hall staff, nurses, teachers and police officers" (London Times, 13 October).

HUNGER INCREASES
"UN food agencies said Wednesday that 166 million people in 22 countries suffer chronic hunger or difficulty finding enough to eat as a result of what they called protracted food crises. Wars, natural disasters and poor government institutions have contributed to a continuous state of undernourishment in some 22 nations, including Afghanistan, Haiti, Iraq, Somalia and Sudan, the Food and Agriculture Operation and the World Food Program said in a new report" (Associated Press, 6 October).

REFORM FAILS AGAIN
"West Africa's cocoa industry is still trafficking children and using forced child labour despite nearly a decade of efforts to eliminate the practices, according to an independent audit published by Tulane University. A US-sponsored solution called the Harkin-Engel Protocol was signed in 2001 by cocoa industry members to identify and eliminate cocoa grown using forced child labour. A child-labour-free certification process was supposed to cover 50 per cent of cocoa growing regions in West Africa by 2005 and 100 per cent by the end of 2010. But independent auditors at Tulane University's Payson Center for International Development said in a late September report that efforts have not even come close to these targets" (Globe and Mail, 8 October).

The Meaning of the U.S. Midterm Election Results

For Republican politicians and the corporate media, the U.S. midterm election results are supposedly evidence of “a massive conservative trend sweeping the nation.”[1] Proclaiming the victory of his party on election night, top House Republican John Boehner declared that “the American people have sent President Barack Obama a message through the ballot box to change course” – and he was not calling on Obama to steer further to the left.

There has clearly been a significant decline in public support for Obama. However, there is no massive conservative trend in national opinion. The real picture is more uncertain and more complex.

The majority did not vote

One point will suffice to deflate the overblown rhetoric. The American people have sent no one a message through the ballot box to do anything, for the simple reason that the majority of the American people – 58.5%, to be more precise – did not vote.
Well, nothing unusual about that. Voter turnout in the United States is low. In fact, a turnout of 41.5% is rather above average for midterm elections: it usually lies between 30% and 40%. Turnout in presidential elections, and in congressional elections held in the same year as presidential elections, is considerably higher, in the 50—60% range, though this is still low by international standards. In the 2008 congressional elections 57% voted.[2]

How likely people are to vote depends heavily on such factors as age and income. People with higher incomes are more likely to vote than the poor, while the elderly are more likely to vote than those of working age. Moreover, these differences are especially wide when overall turnout is very low. People with higher incomes and the elderly vote disproportionately for the Republicans. That is why the Republicans tend to do better in midterm elections than in presidential election years, even when there is no real shift in public opinion.

In the November elections Republican candidates won 54% of the total vote. It is equally true to say, taking turnout into account, that slightly over a fifth of Americans (22%) voted for Republicans and slightly under a fifth (19%) for Democrats. This hardly represents a groundswell in public support for the Republicans. Due to the way the electoral system works, the votes of just 3% of citizens made all the difference between a Democratic and a Republican landslide. It is also striking that a lower proportion of Americans voted Republican in 2010 than in 2008 (25%).

The “tea party” movement has swept many new Christian fundamentalist and other extremist Republicans into Congress. This would seem to support the thesis of a massive conservative trend. At the same time, however, there has been a marked shift in the composition of congressional Democrats that points in a different direction.

The Democrats in Congress are divided into several groups. To simplify matters, let us compare the relative positions of the groups furthest to the “right” and “left”—the “Blue Dogs” and the Progressive Caucus. The elections have reduced the number of Blue Dogs in the House of Representatives by over half, from 54 to 26. In contrast, the number of “progressive” Democrats has fallen only slightly, from 79 to 75. As a proportion of all Democrats in the House, the Blue Dogs have fallen from 22% to 14% while the progressives have risen from 32% to 40%.[3]

So while the Democrats as a whole suffered a major setback in the elections, many if not all “progressive” Democrats did quite well. To take one important example, although the Democratic Party lost its traditional hold on the once industrial but now largely deindustrialized Midwest, with dozens of incumbent Democrats losing their seats, in Ohio’s 10th Congressional District the “progressive” former presidential candidate Dennis Kucinich defeated his Republican opponent by the safe margin of 53% to 44%. By distancing themselves from Obama, many “progressive” Democrats were apparently able to capture a share of the protest vote of Americans who had backed Obama in the presidential elections but were now disappointed in him.

The electoral successes of “progressive” Democrats give socialists some grounds for hope. That is not because the “progressives” are socialists or even close to being socialists: their reform program basically aims to make the U.S. more competitive in the context of world capitalism, whose continued existence it assumes. Nevertheless, they have shown that it is possible to withstand the hostility of the corporate media and find other ways to establish and maintain contact with ordinary people. If they can do it, socialists can too.

Breakup of the two-party system?

Thus, the trend revealed by the election results is not clearly conservative in nature. The change in the relative strength of the Democratic and Republican Parties is less significant than it appears. But there has been a further strengthening in the position of the extreme “right” within the Republican Party and of the “extreme left” (by the standards of U.S. politics) within the Democratic Party. In other words, American public opinion is undergoing a process of polarization.
This raises the question of the future shape of the American party system. The two-party system is deeply entrenched, but under extreme stress its breakup is surely conceivable. Both the Democratic and the Republican Party are now more deeply divided than ever before. Should one or both of them split apart over the next few years, the result could be a more varied and changeable political landscape with three, four, or even more large national parties.[4] The political process might then no longer be under such tight corporate control, placing socialists in a somewhat less constraining political environment.