Obituary from the March 1966 issue of the Socialist Standard

We regret to report that our comrade Alf Mitchell of West Ham Branch died in December. A member of the Party since 1912, Alf Mitchell was an active member, particularly at outdoor meetings where he was always prepared to chair the meetings and sell literature.

During the 1914-18 war after appearing before several tribunals, he was arrested and fined 40/- . . . which he never paid, and was turned over to military escort. Whilst under military supervision he managed to dive through an open door and the authorities never caught up with him, despite enquiries among comrades.

He had been ill for several recent years, but until this, had been active in the fight for Socialism. We tender our deep sympathy to his widow and family.
M.H.
Posted by Imposs1904 at 10:56 AM 1 comment: 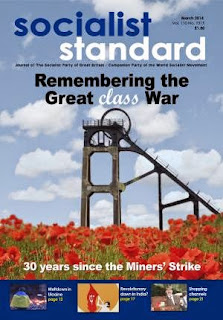 Too Poor To Live
You would think that the purpose of medical research is to save lives. Think again, this is capitalism. In an interview with Bloomberg Businessweek, Bayer CEO Marijn Dekkers said that his company's new cancer drug, Nexavar, isn't for Indians, but ‘for western patients who can afford it’. 'The drug, which is particularly effective on late-stage kidney and liver cancer, costs approximately $69,000 per year in India, so in March 2012 an Indian court granted a license to an Indian company to produce the drug at a 97 percent discount. Bayer sued Natco Pharma Ltd, but in March of last year, the High Court in Mumbai denied its appeal. Bayer CEO called the compulsory license issued by the Indian court ‘essentially theft,’ then said ‘we did not develop this medicine for Indians we developed it for western patients who can afford it’ (Raw Story, 26 January). The purpose of medical research, like everything else inside capitalism, is to make a profit.

Dying To Work
The owning class hate to see workers not working. After all they rely on them to produce the surplus value the owners live on. In addition the owning class have got to pay out sickness benefits. Last year they reckon it cost them about £13 billion. The present government have appointed the company ATOS to overhaul the benefits system. Its findings have not been without its critics though. 'One 39-year old woman from Livingston, near Edinburgh, was judged fit to work just weeks before she died. A heart and lung transplant patient from Essex died nine days after being declared well enough for employment' (Sunday Times, 9 February). C'mon workers so you are a bit knackered ... oops dead! Sorry about that.

Business As Usual
Every year the president of the USA gives a State of the Union speech. It is usually the same old guff about how marvellous everything is inside capitalism, but this year there was a slight difference. ‘Those at the top have never done better. But average wages have barely budged. Inequality has deepened. Upward mobility has stalled. The cold, hard fact is that even in the midst of recovery, too many Americans are working more than ever just to get by –let alone get ahead. And too many still aren't working at all’ (Independent, 29 January). It is indicative of how awful capitalism has become that even the president of the USA has to acknowledge it. Needless to say however he will carry on running capitalism the only way it can be run –in the interests of the owning class based on the exploitation of the working class.

American Nightmare
The USA is often depicted as the embodiment of the virtues of modern capitalism but we are indebted to the American economist Paul Krugman for this expose of its less than perfect characteristics: 'What do we know about long-term unemployment in America? First, it's still at near-record levels. Historically, the long-term unemployed –those out of work for 27 weeks or more - have usually been between 10 and 20 percent of total unemployment. Today the number is 35.8 percent. Yet extended unemployment benefits, which went into effect in 2008, have now been allowed to lapse. As a result, few of the long-term unemployed are receiving any kind of support' (New York Times, 9 February). Hardly the American dream is it?

Knightsbridge Bargain
While many workers scrimp and save in an effort to get together a deposit for a mortgage it is worthwhile looking at how the owning class live. 'An allotted space in an underground car park has gone on sale for £400,000. The space, near the Royal Albert Hall, Knightsbridge, is large enough for a Rolls-Royce Phantom and comes with metal lockable doors' (Times, 13 February). You homeless workers will be glad to know that the agent Hobart Slater said ‘We've already had plenty of interest in the space.’