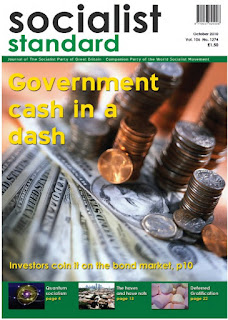 Every journalist hack and indeed newspaper buyer knows that if you put ‘sex’ on the cover page you tend to sell more copies. Science magazines and TV programmes appear to have a similar trick with the word ‘quantum’. Presumably this is because readers understand as little about the one as they do about the other, and salivate in a pavlovian reflex at any false promise of enlightenment.

Since nothing in physics is sexier than the search for a ‘quantum gravity’ theory which might underpin and unite the two great arch-enemies, relativity and quantum mechanics, any book which claims some new insight into the subject will be noisily promoted by publisher and media alike. And all the more so if produced by Stephen Hawking, the one physicist that the UK public have actually heard of.

Hawking is already famously quoted from his new book The Grand Design as coming out against the God-squad: "It is not necessary to invoke God to light the blue touch paper and set the universe going." All well and good, but readers of his earlier, supposedly populist work A Brief History of Time (1988) will know it’s probably necessary to invoke a squadron of fictitious supernatural intellects in order to throw any light on Hawking. Carl Sagan or Richard Dawkins he ain’t.

"M-theory is the theory of everything. It explains how the universe was created out of nothing in the Big Bang, and how it behaves now”, Stephen tells us in a recent Newsnight interview, as if the matter has now been satisfactorily resolved, adding that "M-theory is the unified theory Einstein was hoping to find". A reasonable viewer might conclude from this that M-theory has actually been ‘found’ and that its equations really do solve the fundamental problems of physics. This however would be placing the truth of the matter into some quantum superposition in the eleventh dimension. In fact, as theoretical physicist and iconoclast Lee Smolin pointed out in his book The Trouble With Physics (2006), M-theory is a fictitious label to describe a theory which does not yet and may never exist and for which evidence is almost completely lacking. It is not a theory, it is merely a statement of intent. ‘M’ does not even stand for anything, although Hawking suggests it could stand for ‘master, miracle or mystery’. It could just as well stand for ‘mumbo-jumbo’.

The problem with string theories, whose mutual disagreements M-theory would need to resolve, is that they present us with an unattractive choice between the fundamentally unknowable and the fundamentally incomprehensible. The only way to tie up all the loose stringy ends into a neat package that can explain all those myriad annoying particles with exotic names is a formula that doesn’t just account for our universe but also 10500 other universes too (this is a 1 with roughly this paragraph’s worth of zeroes after it, some 410 orders of magnitude more than the number of atoms in the known universe). Being asked to believe that there are indeed this many universes existing in parallel, 48 quadzillion of them possibly hiding under one of your toenails, does not do much to inspire confidence. Most normal people would suggest that such a theory is no theory at all, but then perhaps normal people don’t go into physics.

Still, maybe we’re missing a marketing opportunity here. We could relabel socialism as M-theory, for Marx or Materialist, and even include our own ‘uncertainty principle’ just for those critics who think we’re smart-alec fanatics who never question our own ideas. After all, we never said we knew everything. And wouldn’t ‘Quantum Socialism’ look good on the cover?

Dawkins deified
Was there a deliberate irony behind the Guardian’s decision to entitle an interview with four prominent scientists, including Richard Dawkins, as ‘Gods of Science’ (11 September)? If there was any embarrassment on Dawkins’ part he didn’t mention it. When asked who his own favourite living scientific hero was he chivalrously cited his co-interviewee David Attenborough. Brian Cox, formerly pop star, now an engaging TV presenter and photogenic professor who presents entry-level astronomy to people who aren’t sure which revolves around what, would probably by his own admission not quite qualify as a God. He cited his co-interviewee Stephen Hawking as his hero. Meanwhile, avoiding any such yuk-factor, Attenborough cited Richard Feynman, whose many sterling attributes do not include being alive. Hawking grumpily refused to cite anyone at all. Maybe next we’ll get a tour round their kitchens in Hello magazine. Celebrity chemist, anyone?
Paddy Shannon
Posted by Imposs1904 at 2:37 PM No comments: