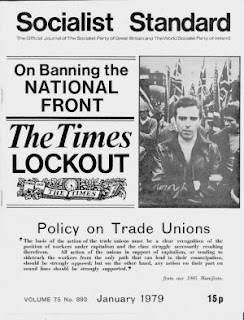 Answer: No! It will not. Socialism is the common ownership of the means of production; this means the vast modern production complexes, which have to be worked co-operatively, established in fact by capitalism.

Does our questioner want to operate his own North Sea oil rig, or steel mill, or chemical plant. railway or airport? He cannot do this NOW, under capitalism, neither he in socialism. Neither can he drive his own car "where he likes', but only according to the Highway Code which is what society likes. If he ignores red lights, or goes to France and drives on the left, he will get killed or arrested.

Exactly what form transport or housing takes will be decided by socialist society, but we seen no reason, so far, why anybody wishing to design, construct and enjoy his own articles of consumption should not do so. 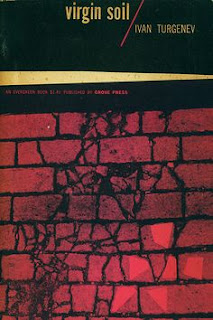 From the July 1965 issue of the Socialist Standard


It is a popular misconception of Marxist materialism that it can be used to establish a rigidly determining link between economic factors and appearance of, for example, works of literature. This is a vulgar and mechanistic interpretation of what materialism sets out to explain. There is no law of economic inevitability that provides a formula for a determining link between economic factors and the creative ability that appears from time to time uniquely in the personality of one artist. Nevertheless, the social framework provides the possibilities within which the talent of artists expresses itself and comes to fruition.

Moreover, the whole history of literature, its form, and subject matter, can be shown to have a developing relationship with the development of all other aspects of society and ultimately hinges upon economic evolution.  Especially can the work of 19th century Russian writers present a clear and explicit example of how literature can be closely involved in political controversies and can reflect the conflict of social forces which are ultimately of a class nature.

Due to the intolerance and authoritarianism of Russian life, there was a complete absence  of freedom of speech in print. There was no freedom whatsoever for the kind of political pamphleteering that was common in Western Europe. Even so, great controversies did rage and the tradition grew up that viewpoints were expressed through the medium of fiction. Turgenev was one writer who used his art as a vehicle for polemics and pamphleteering, so much so, that after incurring the Tsar's displeasure for his polemical tone, he went into exile in 1855 and spent the remainder of his life in Baden and Paris.

In Turgenev's novel "Virgin Soil", the major forces of Russian 19th century society are shown interlocked in close conflict. The character of Kollomietzev personifies the rigidity of the established landed aristocracy and typifies what Engels described in 1874 as " . . . oriental despotism whose arbitrariness we in the west simply cannot imagine. A despotism which from day to day comes into more glaring contradiction with the views of the enlightened classes and in particular with those of the rapidly developing bourgeoisie."

In drawing the character of Kollomietzev, Turgenev describes the affected arrogant postures of the landed nobility. "The only principle that I acknowledge," remarks Kollomietzev, "is the whip." He holds the toiling masses in complete contempt, regarding than as less than animals, and sees the church and the government as necessarily oppressive instruments of upper class authority. He sees his own social role as that of upholding privilege, and leading a life as remote as possible from useful production. He despises even what he considers to be the vulgarity of the capitalists' interest in factories and commercial profit.

Sipiagin is a man of property who is interested in factory production. In outlook, he is more flexible, liberal minded and free from the stultifying prejudices of his fellow landowner. In the novel he goes to some lengths to win over into his own employment an efficient factory manager. Such competent technical men in Russia were rare.

The novel also includes a collection of revolutionaries who are referred to as "socialists." They are forced to operate underground, as a secret society. Though they are inspired and dedicated, they conduct their conspiracies with a completely false and unrealistic view of Russian social consciousness. One of the revolutionaries insists that soon " . . . there would be nothing to hinder them from making a 'beginning' as the masses refused to wait any longer!"

They cannot come to terms with the general ignorance that precludes any useful point of contact between the peasants and their own well-developed ideas, and cover failure with self-reproach, lamenting their own inadequacies. "He wrote a long letter to his friend Silin about the whole thing, in which he bitterly regretted his incapacity, putting it down to the vile education he had received and his hopelessly aesthetic nature." In the book, the activities of the revolutionaries inevitably end in failure and disillusion.

In his essay "Social Relations in Russia", Engels predicted revolution in the offing, but it must be said that he did not extend its possibilities to the introduction of Socialism. The farthest that he would go was in saying that "  . . . it will destroy at one blow the last, so far intact, reserve of the entire European (landed) reaction," which of course it did.

Turgenev's "Virgin Soil" is about the unresolved nature of 19th century Russian politics, and its stifling effect upon the historical demand for industrialisation. The longer the balance of economic forces that underlay this political indecision continued, the more critical became the dislocation between dynamic European capitalism and the faltering vacillation of Russian society. At the same time the Russian state was inextricably involved in Western Europe, whether it desired it or not, especially about the waging of war.

It is a matter of history now that the discrepant relationship between Russia and Europe reached its critical climax in October 1917. With the decisive shock of the Bolshevik revolution, Russia at last became unreservedly committed to the building of industrial capitalism.

Although the characters in Turgenev's novel represent economic and political forces, except for two who are deliberate caricatures, this does not diminish them as human personalities. As the novel unfolds itself, they act and react with convincing realism. This is history in microcosm, with men, seldom conscious of their historical role, clashing as individuals in specific situations, prejudiced, bigoted, pragmatic, idealistic, but ultimately intelligible within a framework of material struggle and class conflict.
Pieter Lawrence

This article has been compiled from notes taken at a recent discussion at the Bromley Group.
Posted by Imposs1904 at 11:26 PM No comments: 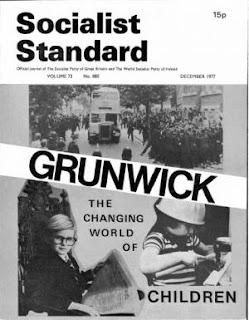 Two items of news appeared in the press this week that are worthy of note, if only to show you, the workers, how much the capitalist class and their flunkeys value your miserable lives.

Under the caption "N-Bomb for People" (Herald 7.6.77) we learn that the Americans are about to begin production of a nuclear warhead that can kill people without destroying property.

The new warhead cuts down on blast and heat and this total destruction leaving buildings and tanks standing. But the great quantities of neutrons it releases kill people.


Not much doubt here where capitalism's priorities lay—People or Property. You, the people, are expendable, your lives not worth consideration when it comes to war. You can die in the most horrific way that these diabolical weapon-producers can dream up but save the property, that costs money!

The second item, published in the Auckland Star (13.6.77) under the heading "Monkey's perish to Produce Death Ray", reads almost like a horror story, the author of which, if in fiction, would have to have the imagination of a sadistic monster. But this is not fiction, but cold hard fact. Even if the reader was not an animal lover he would still feel disgusted and ashamed that he is a member of the human race.

Highly trained monkeys are killed by high energy radiation and burns in experiments carried out by the United States Navy. These deaths were quoted as "appallingly painful".

And what are these dreadful experiments in aid of. Just to find out how long you can continue to be of use to the war machine after exposure. How long can you continue to drive a tank, fire a gun, or push buttons.

Their desire to get the last ounce of use from your body, even though it might be in the throes of an agonizing death, really shows what lengths these monsters will go to in order to perpetuate their system. 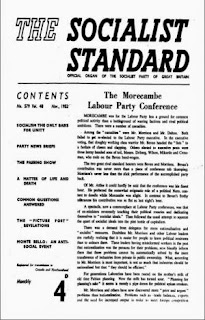 On the 26th September the new Tribune appeared, it is no longer a magazine but a weekly newspaper complete with photographs. Many of the articles are written with a lively style, but then so is the Daily Mirror. The new Tribune claims to be a socialist paper; well we are willing to believe anything that can be proved. Let's have a look at the claim.

On the front page we are told in red type that "Nye Bevan writes on page four," the maestro himself—more boosting of the leader. It's a bad start as socialists do not follow leaders, they don't have them.

The main article on the front page with big headlines "Declaration of Independence—We Don't Want Those Dollars" begins as follows: - "Our Country is in greater danger than at almost any time since 1940. But today the threat does not come from dive-bombers and blitzkrieg. The urgent peril is not one of military conquest. The danger is creeping social decay and a mortal surrender of British independence." Who are the patriots? It can't be the Tories or Attlee and Co, since they accepted the dollars, surely it must be Bevan and Co.—No socialism here so let's turn to page 2.

J. P. W. Mallalieu, who describes himself as a free-lance journalist occupies most of the page. He tells us the heart-rending story that he only receives £1,000 per year as an M.P. with no subs from the Co-op. and no subs from a Trade Union although he is a member of both. They do things better in America as the Nixon affair showed.

On page 3 we have Jennie Lee, she her article "what an extraordinary mixture our Labour movement is! On some issues it takes a robust Socialist line then on others it's as conservative as the Tory Party." We can certainly agree about the extraordinary mixture of the Labour movement although we have failed to see where it takes a robust Socialist line. Perhaps Jennie Lee will write another article and tell us.

On page 4, as we were advised on the front page, there is an article by Aneurin Bevan complete with a smiling photograph. He requests "Don't be misled by the smear campaigns.: The "great leader" hasn't been getting the support he expected. In his article he makes an attack on the Communist Party, he omits to mention that he was once expelled from the Labour Party because he formed a united front. His argument is for more nationalisation, no wonder he hasn't got the support he so badly wants. Nationalisation hasn't proved so popular with the workers.

On the same page there is an obituary on the late George Tomlinson. We are told: "On the platform he was a masterly performer. Audiences rocked with laughter and sometimes came near to tears. He held them in the hollow of his hand. He could do what he wished with them."—No he wasn't an actor, not on the legitimate stage at least, he was a Labour M.P. and Minister.

There are a number of adverts, even the brewers don't mind claiming "Beer is Best" in the Tribune. But still nothing about Socialism, in fact it's the same old Tribune but that's what we expected.
D.W.L.