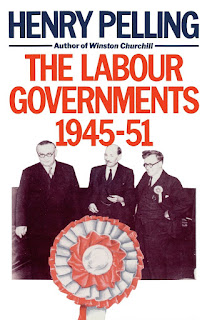 Book Review from the January 1986 issue of the Socialist Standard

Nervous of the future, with its prospects of another five years of Thatcher government, members of the Labour Party have been known to draw comfort from a conveniently distorted version of their past. Not, of course, the past of Ramsay Macdonald and Jimmy Thomas; their nostalgia centres on the time of the Attlee government, which came to power a little over forty years ago.

Those were, we are told, the days; key industries nationalised so that they belonged to, and worked for the benefit of, the people; the National Health Service set up to provide a free medical service of the highest possible quality; Family Allowances introduced to remove the burden of poverty from families for ever; Ernie Bevin signalling the day of the common person at the Foreign Office; Herbert Morrison ensuring an efficient passage to the Promised Land; Nye Bevan's fluent tongue on guard over Labour's conscience, to keep the party straying from the path to socialism. A great time, they remember, for the Labour Party and the British working class.

The only problem is that it didn't seem at all like that at the time. A more accurate memory would recall austerity, more intensive exploitation by way of wage restraint linked to exhortations to work harder, economic crises, war, conscription, internal feuding  . . . When the Labour Party were defeated in 1951 it was said to be due partly to several of their big names having died or being seriously ill—an inadequate explanation, since the Tories who replaced them were not free of these handicaps; Churchill had suffered some devastating strokes and Eden—Churchill's obvious successor as leader—was practically living on drugs to ease his intestinal troubles. The truth is that Labour lost because they failed to keep their promises to create a secure, prosperous country; most of their precious theories, devotedly nursed over so many years, had been put into practice after 1945 but had had no fundamental effect on working-class lives. Capitalism lived on, with its class division, its poverty and slums, its exploitation of one class by another, its diseases, its war. Much of the energy of Socialist Party propaganda went into contrasting this with what socialism will actually be—a classless social system based on communal ownership of the means of life, free access, a united human race.

There was, to begin with, nothing of socialism in Labour's nationalisation schemes. There was no proper resistance from the Tory opposition to the state take over of the Bank of England, the railways and the coal mines. Gas nationalisation had already been advocated by the Heyworth committee and civil aviation was largely under state control as the result of measures taken in the 1930s by Neville Chamberlain. Even the steel industry, over which there was a certain amount of posturing by the Tories, accepted the case for " . . . national planning . . . if you are going to have a Steel Board it should be a permanent control board and its powers should be thorough" (Sir Andrew Duncan, Conservative MP and Chairman of the Iron and Steel Federation, 21 May 1947). Nationalisation was a means, not to common ownership but to an adjustment in the details of minority class ownership, intended to act in the overall interests of the British capitalist class. At the 1948 Labour Party conference a delegate from the Post Office Workers—who, working for one of the established nationalised concerns could claim to know what he was talking about—declared himself "cynical" about "the idea of some organised sections of the workers that nationalisation itself will bring freedom from exploitation".

There was also effective party agreement about the "welfare state". The coalition government had accepted all three of the basic assumptions of the Beveridge Report—family allowances, a national health service and "full employment". Debate, such as it was, centred on matters of timing and levels of state benefits, and the doctors bargained with some ferocity, just like any group of workers whose working conditions are under review and who have the strength to resist, over their pay and other issues. But there is no doubt that had a Tory government been elected in 1945 there would still have been a "welfare state" and that it would not have differed much from the model which Bevan eventually piloted through parliament. The reason for this was that the pre-war fragmented, uneven medical services and benefits were inefficient in providing the healthiest, most profitably exploitable workforce. The general interests of the British capitalist class demanded that there be changes and both Labour and Conservative parties were united in their readiness to make them.

When it came to the international protection of the interests of the British ruling class, the Attlee government knew exactly what their priorities had to be. In January 1947 they decided to start making the atomic bomb; a little over a year later Defence Minister A. V. Alexander assured the Commons that " . . . research and development continues to receive the highest priority in the defence field, and all types of weapons, including atomic weapons, are being developed". That same year the Cabinet approved the unprecedented introduction of permanent peacetime conscription. It was a decision which epitomised the Labour Party's "progress" over its fifty years of existence, for that Cabinet contained several men who had been conscientious objectors in World War 1. Labour's expenditure on armaments steadily increased so that in 1951 Chancellor Hugh Gaitskell envisaged spending £4700 million on "defence" in three years and was looking to restrict social expenditure in consequence.

Henry Pelling has written an absorbing and detached record of that government, which went out of office with the Tories promising to "set the people free" (by which they meant relieving the British capitalist class of the more irksome of the wartime controls, while keeping a lot more in operation). Pelling exposes some of the infighting, the squabbling and personal jealousies among that supposed band of sisters and brothers who told us they were bonded in the struggle to bring socialism to this country. One who emerges as perhaps the most spiteful was Hugh Dalton, the old Etonian son of the Dean of Windsor, as a child disliked by Queen Victoria and elevated in 1945 to Chancellor of the Exchequer. Dalton was an ebullient left winger by reputation and his contempt for the working class was typical of a Labour "intellectual". Pensioners he described as " . . . those wretched old people, who are our most troublesome Pressure Group". After the 1950 election he declined the job of Colonial Secretary because it would involve visits to "pullulating, poverty-stricken nigger communities  . . . who the more one tries to help them, are querulous and ungrateful". How anyone with those kinds of opinions could claim to be remotely connected with socialism defies any rational explanation.

But perhaps the working class who, whatever else they wanted were then, as now, concerned that their ruling class' interests should prosper, were not as grateful as they might have been to the Attlee government. By any standards, Labour did a pretty good job for British capitalism and at the end of 1948 the Economist—who should have known—commented that "There can be no doubt that on the major issues of economic policy, the nation has been travelling on the right road". What higher praise could the Labour Party expect, for proving so devotedly through those years that the British capitalist class had nothing to fear from them?