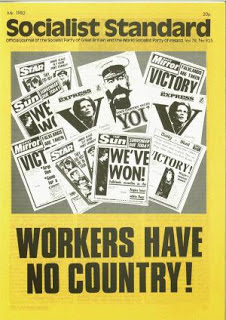 From the July 1982 issue of the Socialist Standard.

With all the jingoistic talk about our masters' imperial battles it is easy to ignore the fact that there is a social war going on which will never cease as long as society is divided into two antagonistic classes. The class war turns humans into competing enemies and transforms society into a battlefield.

Under capitalism the means of wealth production and distribution are monopolised by a class which is legally entitled to defend its ownership and control by means of violent force. The facts of class possession are beyond dispute: in Britain, for example, the richest ten per cent of the population owns more of the accumulated wealth than the poorer ninety per cent put together. A society which is so fundamentally unequal can never be genuinely democratic.

The relationship between the two classes - capital and wage labour - is that of exploiter and exploited, robber and robbed. To understand this, one must consider the common source of wages and profits. It is sometimes claimed that workers should be grateful to their employers for giving them wages. It is implied that employment is a gift provided by the capitalists so as to support the workers. In fact, the opposite is the case: wages are the hallmark of legalised robbery; profits are a gift provided by the workers so as to support the capitalists. This closely-guarded secret may sound strange to workers ignorant of their own exploited position, but a little investigation into capitalist production soon demonstrates the truth of it.

The capitalists own and control the technology, means of production and resources which enable humanity to survive. In some countries they own them privately; in others they do so through their executive committee, the state. They are only in this privileged position because a majority of people allow thern to be. In Britain, workers regularly go to the polIs and vote for representatives of the system of class monopoly.

The majority of people are not capitalists: they possess very littie except their ability to work: labour power. So the workers possess mental and physical energies, but lack the ownership and control of the productive machinery; the capitalists have the productive machinery, but they need human labour to run it for them. The obvious conclusion must be for the two sides to form a "partnership ": the workers are employed to produce, but not possess and the capitalists are permitted to possess, but not produce.

A partnership between Haves and Have-Nots is bound to be an unequal one and this is the case under capitalism. The relationship of wage labour and capital is not that of equal partners, but of user and used. The capitalist employs - uses - the worker's labour power at a price which is called a wage or salary. When labour power is purchased it is the capitalist's to use for a period of time. Labour power is a commodity in that, like baked beans and electric toasters, it is produced for sale on the market. Why does the capitalist buy labour power? It is not that he or she feels sorry for propertyless workers and wants to give them money. Capitalists only pay workers to produce wealth if there is a likelihood that the value of the wealth produced will be greater than the wage or salary paid to the wealth producers. In short, unless workers create surplus value they are of no use to the capitalists.

The objective of capitalist production is the creation of surplus value. Out of surplus value comes rent, interest and profit. In short, profits arise from unpaid labour of the working class. This is not simply a case of a few fraud capitalists robbing a few gullible workers; legalised exploitation is as necessary the capitalist system as illegal robbery is to mugging - just as one cannot have a successful mugger who does not hit his victims over the head and rob them, so one cannot have a successful capitalist who does not exploit workers.

Many workers thank the capitalists for exploiting them; they think that being exploited is the greatest piece of luck that could happen to them. Some misguided workers, who call themselves socialists, but are in fact the most backward of social thinkers, actually organise processions demanding the right to be exploited. Yet despite the political acquiescence of the working class to its own inferior status, there are frequent and inevitable battles between the two classes. This struggle is inevitable because of the fundamental antagonisrn of interests between those who receive wages and those who receive profits. At its most primitive level the class struggle is a series of minor battles between sections of the two cIasses over the rate of exploitation, or how much of the wealth prooduced shall go to the workers as wages and how much will go to the capitalists as profits. Because the capitalist class own the productive and distributive machinery they always have the upper hand in these battles over the conditions of exploitation. Trade unions are a feature of this defensive struggle by workers to obtain a few more precious crumbs from the capitalist-owned, worker-baked cake. The class war never ceases under capitalism because there can never be a reconciliation of interests between capitalists and workers.

Victory in the class war can only be won by the exploited class, consciously, politically and democratically defeating the exploiting class. The workers must have no sympathy for the professed needs of the capitalists: they are our class enemies, they possess what we want and every effort must be made to take it from them. The political objective of socialists is to dispossess the capitalist class of its ownership and control of the means of life. Once we have done that society will be able to produce wealth for use rather than for profit. Socialists will not waste time engaging in diversionary and ultimately utopian attempts to reform the capitalist system. The revolutionary task is to end the system, not to amend it, for until the wages system has been abolished the majority of humankind will continue to be exploited.
Steve Coleman
Posted by Imposs1904 at 5:27 PM 1 comment: 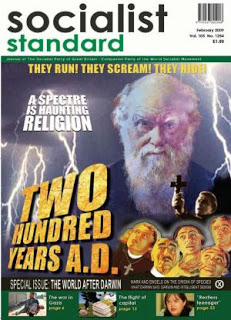 Since the onset of the present crisis, as we have noted, Marx has been mentioned many times in the papers. One of the oddest must be a photo in the (London) Times (8 January) of the Tory Leader, David Cameron, with the caption “David Cameron has lined up with Marx and the Church of England”.

The photo was used to illustrate an article by the paper’s financial guru, Anatole Kaletsky, in which he argued that the way to stop the depression getting deeper was to follow Keynes’s advice and encourage people to spend more. But how can David Cameron, the Church of England and Marx be placed in the same boat? Because, says Kaletsky, all three don’t think much of the government’s policy of trying to spend its way out of the crisis.

True, they don’t, but for quite different reasons.

The Church doesn’t like people pursuing the acquisition of material things and so is opposed to the government encouraging people to spend more on this. In fact, they probably want us all to consume less.

David Cameron claims to believe that the policy won’t work. He wants a different policy to be pursued, but only with him as Prime Minister.

Marxists, like Marx, are not interested in proposing policies for governments to pursue. We say that, whatever the policy they pursue, they cannot make capitalism work in the interest of the majority class of wage and salary workers. We add that, in any event, once a crisis develops, an increase in government and personal spending cannot make it any shorter than it is otherwise going to be.

Crises only come to an end when stocks have been cleared, inefficient businesses eliminated, asset values have depreciated and real wages and interest rates fallen, so restoring the rate of profit, the incentive to produce (and the brake on producing) under capitalism.

Printing more money (or, what amounts to the same thing, the government borrowing money from itself), as an inflation of the currency, is likely to lead simply to rising prices while production continues to stagnate. “Stagflation”, as it has been called.

Cameron – of course – does not accept this. He has a different explanation for the crisis: that it was caused by the policies of the Labour government, and so can be ended by a new government pursuing a different policy. This is just the stuff of the game of parliamentary politics, based on the illusion that governments can, and do, control the way the economy works. But they don’t.

If Brown is being blamed for causing the crisis it’s partly his own fault. When the economy was expanding he was keen to claim the credit. He even made the ridiculous boast that he had ended the boom-slump cycle. Now that things have gone wrong, he’s blaming the international economic situation. This is true, but he – and politicians generally – can’t have it both ways. They can’t claim credit for the good times and blame world events for the bad times. Actually, it’s the uncontrollable world economy that’s responsible for both.