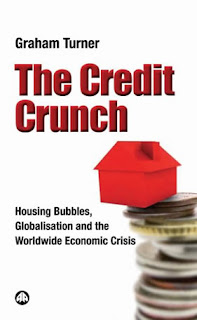 Book Review from the April 2009 issue of the Socialist Standard

Graham Turner has made a number of appearances on BBC2’s Newsnight in recent weeks, helping Paul Mason deconstruct the credit crisis and slump.

Turner is a Keynesian of sorts and a fan of ‘quantitative easing’ i.e. of central banks flooding the financial markets with liquidity in the hope that this will get banks lending again, literally giving people more money to spend. As history demonstrates though – and Marxian economics explains – the practical effect of this is further doses of currency inflation as it is likely to accelerate the continuing overissue of inconvertible paper currency that has been going on since the Second World War.

This book is currently one of the most widely available explanations of the financial crisis in UK bookshops. But in essence it is a confused book and Turner seems to think that the reason the Keynesian remedy hasn’t worked on any previous occasion is because the policy levers weren’t pulled in quite the right order, or at quite the right time.

As an illustration of the book’s confusion, there are a large number of pages discussing in great detail what Turner apparently sees as the supposed significance of trade deficits and surpluses in various countries affected by the asset price bubble. But then he concludes, all of a sudden and for no particular or stated reason – much in line with the historical evidence but against the line of his own argument presented here – that ‘It does not matter that much whether a country is running a trade deficit or a surplus: a bubble is a bubble, and there are far too many around’. Indeed.

Though it includes some interesting and useful statistical data and graphs, after this point it was difficult to take the book entirely seriously and George Cooper’s rival explanation in the Origin of Financial Crises (reviewed in March) is clearer, more in accordance with reality and much to be preferred.
DAP
Posted by Imposs1904 at 12:43 PM