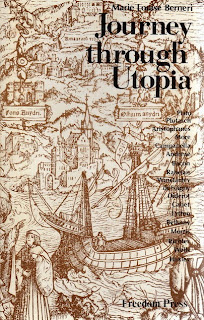 Book Review from the March 1986 issue of the Socialist Standard

Journey through Utopia is Marie Louise Berneri's classic study of the most important utopian writings from Plato to Huxley. The book was first published in 1950, a year after the author's untimely death at the age of thirty-one, and recently re-issued. It is a scholarly work (Berneri used her fluent knowledge of four languages to make her own translations in the absence of English versions) but the author's journalistic experience ensures that the text remains very readable.

An examination of the utopias of antiquity shows Aristophanes satirical utopias to be more pleasant than Plutarch's "most perfect example of a totalitarian state" or the slavery, despotism and elitism in Plato's Republic. As Berneri points out: "It is rather puzzling that Plato's Republic should have aroused such admiration and, paradoxically, it has been chiefly admired by men whose principles were completely opposed to those of Plato".

The chapter dealing with the utopias of the Renaissance is the most interesting. Sir Thomas More's Utopia calls for the abolition of the death penalty for theft, and puts forward one of the earliest arguments for free access to wealth, pointing out that it is economic insecurity which makes people greedy. However, far from being a perfect society, crimes and adultery are punished by slavery and imperialist wars are waged against weaker states. Berneri points out: "In a society which admits of slavery even the 'free citizen' is not free; his chain is no longer than that of the slave".

Campanella's City of the Sun is the first utopia to abolish slavery: property is abolished for the whole community and a leading role is given to natural sciences. Campanella was tortured and imprisoned by the Inquisition and because of the risk of confiscation, several versions of his works exist. Torture and prisons are banned from Campanella's utopia - probably influenced by his own ordeal - but there is little individual freedom: women can be condemned to death for using make-up or wearing high heels.

Francis Bacon anticipated modern trends by placing faith in technological changes, departing from the idealistic utopias of his predecessors, while Andreae, although deploring the death penalty and the "wickedness of men who punish rather than reform", displays the intolerance of the religious reformer. By contrast, Rabelais did not propose a remedy for the evils of the time. His utopia is more of an individual rebellion with only one rule: "Do What Thou Wilt", and probably all the more readable because of it.

The first utopian to believe that society could only be changed by the people as a whole was Winstanley, who wrote The Law of Freedom in 1652. However, paradoxically, slavery is the punishment for lesser crimes while for more serious ones Winstanley's ideas are barbaric: "He who strikes his neighbour shall be struck himself by the executioner blow for blow, and shall lose eye for eye, tooth for tooth, limb for limb, life for life".

The nineteenth century utopias are considered boring, reflecting the conceit of the authors. A notable exception to the authoritarian, centralised control of Cabet or Bellamy and the curious attempt by Lord Lytton to reconcile certain socialist ideas with laissez-faire capitalism is News from Nowhere by William Morris, which appeared in serial form in Commonweal in 1890. Morris "realised that the manner of life of a community cannot be artificially arranged in the mind of an individual, but must be spontaneously created by all the members of the community". Berneri praises this charming vision of an ideal society and it is one of the few utopias with which socialists could sympathise.

The final chapter deals with modern utopias. Bureaucracy, coercion and moral compulsions are used by H. G. Wells in A Modern Utopia in 1905, although he altered his views in Men Like Gods in 1923. Berneri considers Wells to be the last utopian writer in the classical tradition; modern writers such as Zamyatin and Huxley have written dystopias in which the central characters rebel against the authoritarianism, regimentation and enforced happiness of their societies.

Journey through Utopia is a comprehensive guide to the utopias of the past and a warning of the dangers of permitting others, however well intentioned, to plan our future for us. The emancipation of the working class must be carried out by the workers themselves.
Carl Pinel