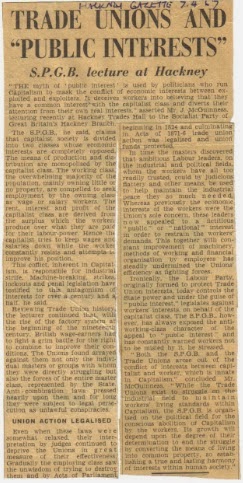 Report from the 7th April 1967 issue of the Hackney Gazette


"The myth of the 'public interest' is used by politicians who run Capitalism to mask the conflict of economic interests between exploited and exploiters. It deceives workers into believing that they have a common interest with the capitalist class and diverts their attention from their own real interests," asserted Mr. J. McGuinness, lecturing recently at Hackney Trades Hall to the Socialist Party of Great Britain's Hackney Branch.

The S.P.G.B., he said, claims that capitalist society is divided into two classes whose economic interests are completely opposed. The means of production and distribution are monopolised by the capitalist class. The working class, the overwhelming majority of the population, mainly owning little or no property, are compelled to seek employment by owning class as wage or salary workers. The rent, interest and profit of the capitalist class are derived from the surplus which the workers produce over what they are paid for their labour-power. Hence the capitalist tries to keep wages and salaries down while the worker constantly resists and attempts to improve his position.

This conflict, inherent in Capitalism, is responsible for the industrial strife. Machine-breaking, strikes, lockouts and penal legislation have testified to this antagonism of interests for over a century and a half, he said.

Reviewing Trade Union history, the lecturer continued that, with the rise of the factory system at the beginning of the nineteenth century, British wage-earners had to fight a grim battle for the right to combine to improve their conditions. The Unions found arrayed against them not only the individual masters or groups with whom they were directly struggling but also the forces of the entire master class, represented by the State. Anti-combination laws pressed heavily upon them and for long they were subject to legal persecution as unlawful conspiracies.

UNION ACTION LEGALISED
Even when these laws were somewhat relaxed, their interpretation by judges continued to deprive the Unions in great measure of their effectiveness. Gradually the employing class saw the unwisdom of trying to destroy them and by Acts of Parliament beginning in 1824 and culminating in Acts of 1871-6 trade union action was legalised and union funds protected.

In time the masters discovered that ambitious Labour leaders, on the industrial and political fields, whom the workers have all too readily trusted, could by judicious flattery and other means, be used to help maintain the industrial peace they so much needed. Whereas previously the economic interest of the workers were the Union's sole concern, these leaders now appealed to a fictitious "public" or "national" interest in order to restrain the workers' demands. This together with the constant improvement of machinery, methods of working and financial organisation by employers has steadily undermined the Unions' efficiency as fighting forces.

Ironically, the Labour Party, originally formed to protect Trade Union interests, today controls the State power and under the guise of "public interest; legislates against workers' interests, on behalf of the capitalist class. The S.P.G.B., however, has always exposed the anti-working-class character of the appeal to "public interest" and has constantly warned workers not to be misled by it, he stressed.

"Both the S.P.G.B. and the Trade Unions arose out of the conflict of interests between capitalist and worker, which is innate in Capitalism," concluded Mr. McGuinness. "While the Trade Unions exist to struggle on the industrial field to maintain workers' living standards within Capitalism, the S.P.G.B. is organised on the political field for the conscious abolition of Capitalism by the workers. Its growth will depend upon the degree of their determination to end the struggle by converting the means of living into common property, so establishing a true and lasting harmony of interests within human society."
Posted by Imposs1904 at 7:22 PM