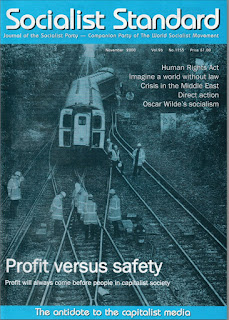 From the November 2000 issue of the Socialist Standard

The Five Days That Shook The Labour Government in September should have given the advocates of "direct action" to further the interests of the environment, animals and disadvantaged groups something to think about. Other minorities can play at this game too and some of them can wield this weapon much more effectively in terms of disruption caused and notice taken. In a battle to "reclaim the streets" between environmentalists and their bikes and failing businessmen and their lorries and tractors who will win?
Sectional interests
The fuel tax protest by lorry owners was clearly a purely sectional issue with one group of small capitalists trying to shift, by direct action, the burden of taxation from them on to other sections of the capitalist class. No wonder the government, as representative of the general interest of the capitalist class as a whole, felt that it had to stand firm and insist that this was not the way to decide how the tax burden should be shared amongst the various sections of the owning class. If they conceded on this one, who would be the next sectional interest to try the same tactic (as the weaker, or less far-sighted, French government discovered)?


The government stood firm and the lorry owners did back down, realising that they were in no position to win a full-scale trial of strength with a government able to mobilise emergency powers and the armed forces. Nor was it in their interest to set a precedent by toppling an elected government. Knowing this the blockaders' leaders were shrewdly able to turn their retreat into a propaganda victory by quitting before the state moved against them and while they still enjoyed a high degree of popular support.
That popular support, however, was not for their sectional interest of saving their failing businesses but for the idea of bringing petrol prices down by reducing the tax on fuel. This tax is, technically, an excise duty, i.e. the government establishes an artificial monopoly which allows the oil companies to sell their products at a monopoly price; only they don't get to benefit from this as the government creams off the resulting extra profits as the tax. The oil companies really are, as they protest, only collectors of this tax for the government. Actually, the price of petrol has gone up, but largely because the basic pre-tax price has. Having said this, a reduction in the tax would of course bring the price at the pumps down to some extent. Lorry owners and the motoring public would be happy but the government would find its revenue cut and, to maintain its expenditure, would have to increase some other tax. This is why it can be said that what the lorry owners were trying to do was to shift the burden of taxation from them to some other section of the owning class.
Only the Greens made a stand against the demand to reduce the duty on petrol; if anything, they want it increased so as to discourage the use of petrol- and diesel-burning cars and lorries. They have a point. Burning fossil fuels is not the best use that could be made of them. The individual motor car has become an irrational means of getting to work—and, increasingly, even getting around—in urban areas. Long-distance freight should be carried on the railways. A comfortable, efficient and comprehensive public transport system is the rational answer. All this is true, but the problem is not going to be solved under capitalism where what happens is not decided by what is in the best interests of the community since there is no community but by the play of market forces supplemented by the lobbying of sectional interests. It is certainly not going to be achieved by "green" taxes and subsidies as advocated by the Green Party. What is required in fact is a complete change in the basis of society to create a real community through ending the division of society into classes by establishing common ownership and instituting production purely to satisfy human needs instead of for sale on a market with a view to profit.
The visionless thing
But talk of a "complete change" in the basis of society is precisely what is rejected by the campaigning charities and environmentalist activists. This wasn't always the case. In the not-so-distant past both the Labour Party and then the Green Party did talk in terms of changing society True, this was only as a long-term prospect, but the idea of an alternative society was there. Now this has gone and those of us who are left proposing this are denounced as "unrealistic" for continuing to advocate a "big solution" when supposedly there is none.


Isn't there? Let's suppose for a moment that there isn't. What would that mean? It would mean that we'd have to continue with what we've got—capitalism, to give it a name, if that's not too "ideological"—and try to make the best of it, as individuals and as sectional interests. Political parties have already become rival groups of professional politicians with virtually identical policies and certainly identical practices, offering themselves as the best managers of the system. So it would mean that politics would be reduced to pressure group politics as different sections of the population tried to persuade governments—whichever the party in power—to make changes in their particular sectional interest or, in the case of campaigning charities, of the disadvantaged group they have chosen to champion. Political action would consist of lobbying, backed up from time to time by direct action, for reforms in the sectional interest of some group.
This is not an attractive prospect but it is one that is, somewhat surprisingly, championed by a number of people who are severely critical of capitalism. What they like is the idea of "direct action" as such. This, they think, is the way to get improvements; electoral action via local councils and parliament, they say, doesn't get you anywhere. But "direct action" is merely a method, a tactic, not an end in itself and can in fact be employed for different ends. In the present political context it is being advocated as a better way to get reforms than elections. May be it is, but maybe it isn't. One powerful argument as to why it might not be has just been demonstrated: those with the biggest vehicles can reclaim the streets more effectively than those without. In other words, with direct-actionist, pressure group politics, those who can exert the most pressure will tend to come off best, and it is the more powerful who can generally exert the most pressure.
In any event Socialists don't get involved in this argument because it is one amongst reformists as to the best way to obtain reforms while we seek to end capitalism not reform it. Our view is that those who concentrate on trying to obtain reforms within capitalism—whether by direct action or through the electoral process—are on the wrong track. What is needed is precisely what most of them refuse—and in fact have consciously rejected doing—and that is raising the issue of an alternative society as the only framework within which the problems for which they are seeking short-term relief can be solved.