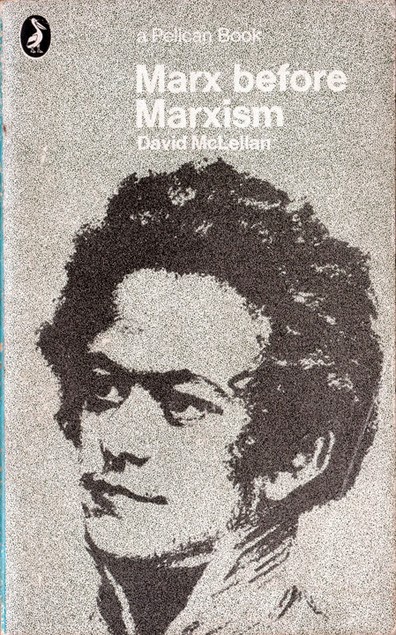 Book Review from the December 1972 issue of the Socialist Standard


This book, now republished as a Pelican, traces the development of Marx's ideas until in 1844, at the age of 25, he became a Socialist (or Communist, as would then more usually have been said).


Marx was born in May 1818 in Trier in in the Rhineland, which had been annexed to France between 1795 and 1814. His father was a legal official who was originally a Jew but who, on the return of the Rhineland to Prussia, had to become a Christian in order to keep his job. Marx himself was baptized as a Lutheran Protestant and went to the local high school and later to university at Bonn, then at Berlin and then back at Bonn again, eventually getting a doctorate from the University of Jena for a thesis on the Ancient Greek philosophers, Democritos and Epicurus.

Marx had originally intended himself becoming a lawyer, but then planned an academic career as a teacher of philosophy. When political considerations made this impossible—Marx had become one of the Young-Hegelians who gave Hegel's philosophy an atheist and radical-democratic twist—he turned to journalism, becoming in October 1842 the editor of the liberal Rheinische Zeitung. At this time Marx was still politically a radical democrat and argued forcefully against censorship and for freedom of the press in Prussia. So forcefully, in fact, that the paper was banned in March 1843. In June Marx married Jenny von Westphalen (whose father had not only been a German baron but also related to the British Dukes of Argyll!) and in October moved to Paris.

Here Marx came into contact with German and French Communists (indeed he lived in the same house as one prominent member of the German Workers' League of the Just, which later became the Communist League for which the famous manifesto was written) and his writings take on a more pro-working class character. McLellan dates Marx's adherence to Communism as sometime during the first three months of 1844.

Marx's writings of this period are, to a modern reader, excessively philosophical, being full of the difficult terminology of the then fashionable German philosophers Hegel and Feuerbach. Marx's whole conception of the socialist revolution too was still philosophical: he saw it as the combination of man's most advanced consciousness (German philosophy or, rather, its outcome) and man's most suffering section (the proletariat). This conception had élitist undertones—the proletariat was to be the instrument of philosophy, i.e.,  a weapon in the hands of philosophers, to achieve Hegel's "rational reality" or Feuerbach's "true species-life"—which Marx was soon to abandon when he teamed up with Engels and the two of them began to put socialist theory on to a more scientific basis. Hence the title of this book of course.

McLellan here provides a good introduction to Marx's writings of this period: the Critique of Hegel's Philosophy of the State (some unpublished notes written in March 1843 before he moved to Paris), on The Jewish Question and Introduction to a Critique of Hegel's Philosophy of Law (both of which were published by Marx soon after moving to Paris, the latter containing the famous phrase about religion being the opium of the people) and the so-called Paris Manuscripts (again unpublished notes).

These works are not essential reading but they do provide the key to what Marx and Engels meant when in later works they wrote of "the end of philosophy" and of leaping "from the realm of necessity to the realm of freedom" and of Socialism as "the beginning of history".
Adam Buick
Posted by Imposs1904 at 9:35 PM