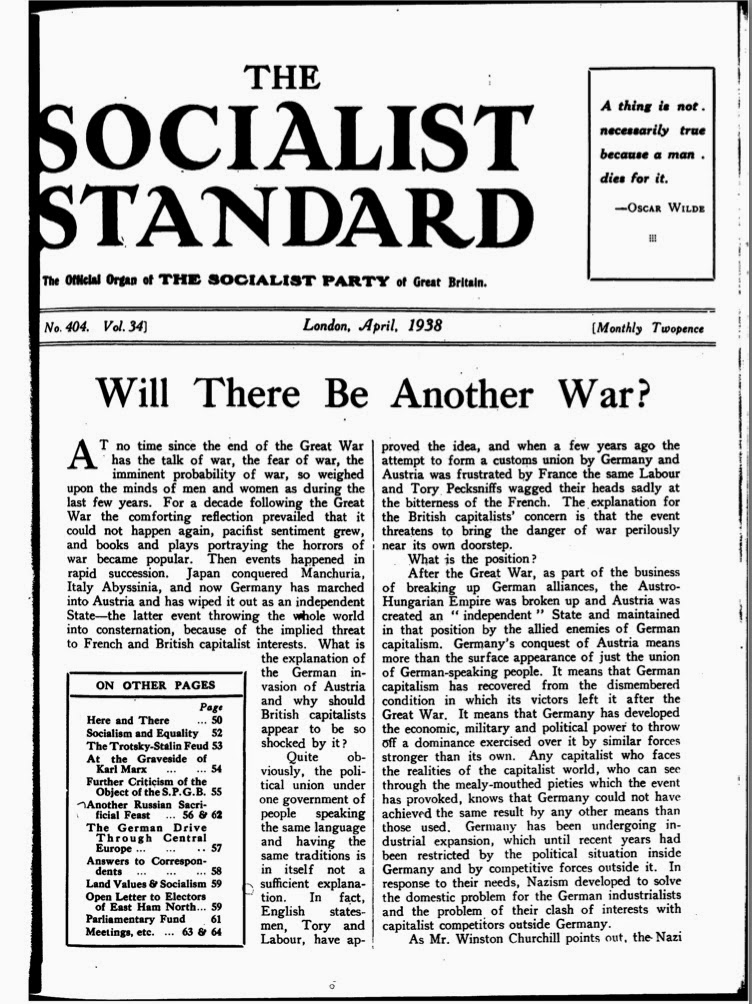 From the April 1938 issue of the Socialist Standard

On March 14th, 1883, Karl Marx breathed his last. He was buried a few days later in the same grave as his wife in the cemetery at Highgate, at that time a suburban part of the great metropolis of London. Although I am a Londoner by birth, and have lived within a few miles of Highgate, although I have been an admirer and an exponent of Marx's teachings for many years, I have not, until March 14th of this year, visited Marx's tomb.

In a cemetery which abounds, like most places of its kind, with profound human emotions, expressed in the form of stones, some marked by a bourgeois relationship by their expressive style, only to bring out in bold relief the proletarian character of those remaining, the grave of Marx is conspicuously of the proletarian order. The class division in modern society cannot fail to reveal itself in the graveyard. I could not help reflecting, as I stood in this thickly depopulated place, what a wealth of philosophy could be made to focus upon so small a portion of "The Good Earth."

For more than half a century after this man had ceased his life's work on behalf of the exploited toilers of the world, the ideas, the theories for which he, to all intents and purposes, gave his life, still circulate and animate in some way or another millions of our class, aye, and the opponents of our class, too, the capitalists throughout the world. Further did I reflect to recall the words of his life-long friend and collaborator, Frederick Engels, who, in a letter to old Wilhelm Liebnecht, on the day of Marx's death, said:

"Although I have seen him to-night stretched out on his bed, the face rigid in death, I cannot grasp the thought that this genius should have ceased to fertilise with his powerful thoughts the proletarian movement of both worlds."

Engels herein expressed a sound sentiment. The influence of Marx goes on, and the bourgeoisie, with their henchmen, do still find in his theories the "haunting spectre" signalling the downfall of their social domination.

About fifty or sixty people, including another comrade of the S.P.G.B. and myself, were present at the graveside on the above-mentioned day. Most of them appeared to be members or sympathisers of the Communist Party. Although a comparatively small gathering, it was chiefly organised by Communists, who had appointed two speakers to speak to those assembled around the grave. Apart from eloquent tributes paid to the memory of Marx, we, of course, had to hear the usual nonsense about his theories having been established in a sixth part of the earth, Russia, and a statement from one of the speakers that if Marx were living to-day he would be writing for The Daily Worker.

Poor Marx! Whatever he did to deserve this strange "tribute" I cannot think. Can anyone outside of the Communist International?

What Marx would be doing, were he still amongst us, is an idle enough question, in all conscience. We can but think that Marx's whole life work was directed towards something totally different from, and in opposition to, the present torturous and murderous state-machine such as Stalin and his gang controlling Russia. The suggestion that Marx would be writing for what, in fact, is little more than a social reformist snippety-bit species of journalese, plus a horse-racing, football pooling "Daily," is the harshest thing said about Marx for many a long day.
ROBERTUS.

'Robertus' was the pen name of Robert Reynolds.

At the time of writing - 1938 - Marx's grave was not marked by the gargantuan head that adorns his graveside today. That was put in place in the 50s at the initiative of the Communist Party of Great Britain.

Background details of the changing face of Marx's grave can be found at the following link.