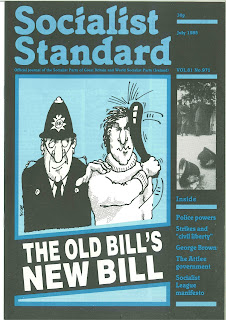 From the July 1985 issue of the Socialist Standard

Historical Materialism is the reasonable view that new methods of production and forms of economic organisation arise, with appropriate ideas, as classes in communities seek to further their interests and satisfy their needs in given social situations. A contrary view was argued by Max Weber in The Protestant Ethic and the Spirit of Capitalism. Weber denies the strong claim of Marx that social existence determines consciousness by illustrating how the ethos of capitalism predated capitalist society. He proceeds by focussing on certain religious communities in reformation Europe and particularly on Calvinists, as their doctrines were readily cast in the form of maxims governing daily activity.

The Calvinist maxims are varied, but two are crucial for Weber's thesis: that you should work hard and adopt an ascetic mode of life. Thus hard work and frugality as maxims led the early Calvinists to set up as entrepreneurs, exploiting the small force of free labourers, reinvesting most of their profits because their religion forbade them to dissipate wealth in personal consumption.

The general conclusion to be drawn from Weber is that an adequate account of the rise of capitalism must allow ideas to have a dynamic of their own, in conjunction with material factors. Weber is an eclectic compromise between materialism and idealism, favoured by liberal historians and sociologists.

Commercial divines
Weber's position is that consciousness determined social existence — but only in the case of some Calvinists. The first difficulty is to explain why some Calvinists became employers and some did not. A general theory which holds that some people's actions are determined by their ideas and some are not, is clearly vacuous. Even if we allow the potency of ideas in a few special cases, there is still a contradiction at the heart of Weber's analysis; for those few whose actions were most determined by their ideas, were also those few who set aside their previous ideas to invent or accept Calvinist doctrines. So those whose actions were most strongly determined by their ideas were, paradoxically. those who were  not. Innovative ideas and cultural change are permanent puzzles on Weber's account.

The strong part of Weber's case is the interesting claim that ascetic protestantism and the Calvinist maxims of hard work and frugality helped to build up an ethos that lubricated the passage to capitalist production relations in several areas traditionally governed by guilds of craftsmen. If you ask modern capitalists for the source of their wealth they may say hard work and frugality and deny that they exploit workers. Weber argues not that this is now true, but that it was once, for a few divinely inspired commercial Calvinists of the seventeenth century

Religious revolutionaries
Unfortunately for Weber, Calvinists had maxims for conduct other than frugality and hard work and some of them do nothing to foster capitalism, or they have the opposite effect. Prime among Calvinist notions is the idea that believers must submit to the clerical authority of the democratic council of elders, who in the early days ruled that usury should be abolished. Moreover the history of two key tenets of early Calvinism is fatal to Weber's argument. The first is the idea of predestination: Calvinists were, at birth, already allocated their places in heaven or hell and their subsequent worldly activity (good deeds) were irrelevant as far as their final destination was concerned. Neither of these ideas remained unchanged as Calvinism and capitalism developed. This is the key to an understanding of the relationship between Calvinist ideas and rise of capitalism.

The early Calvinists were reacting against the luxury of the papal and royal courts, the great wealth of landowners and the monopoly power of trading centres like Venice. They drew up a code of life where all were levelled down to basic condition of uncertainty as to whether, in the eyes of god, they were of the elect of not. The rich were further levelled down to the poor by the injunction to work hard and live frugally, while the irrelevance of worldly activity meant that the rich could not buy places in heaven with their charity; the abolition of usury was a direct attempt to level differences between rich and poor. Round this off with the democratic election of the council of elders by all member of the church and a picture emerges of a small popular movement in revolt against feudalism, catholicism and the counter-reformation. The speeches of Calvin back up this interpretation, for he couched his theory in terms of revolution against the old order and was often wildly cheered in the reformed churches where he preached.

So the ground of the Calvinist church was one of the areas of consciousness in which people could identify their interests and fight for a society that would realise what they wanted. Explained in this way, the strong part of Weber's thesis collapses into the theory of Marx and historical materialism, while the subsequent history of Calvinism is even more illuminating.

The unknown power
The doctrine of the irrelevance of worldly activity to the predestination of the individual Calvinist was the first to undergo change. In the course of a century the faithful came to look on success in world activity as a sign that they were of the elect. As Calvinism and capitalism evolved there was great concern with the acquisition of wealth on the part of those whose ascetic moral code did not permit them to dissipate that wealth in consumption. Thus, if Weber's account were unmodified, the conditions which fostered the most rapid accumulation of capital during the rise of capitalism (wholesale enclosures, lengthening of the working day, speeding up of production -  and the enforced degradation of people into labourers dependent on employers) would be an unlooked-for consequence of a church which came into existence with the intention of democratising religion.

So, even if Calvinist ideas did promote the growth of capitalism, they could only be said to do so quite opposite to the way intended. For the early Calvinist father would have been appalled by the rampant exploitation in the early years of the industrial revolution. Yet Weber asserts that capitalism is the accidental consequence of those who cherished Calvinist maxims. A much more plausible interpretation of this whole business is possible of religious ideas are relegated to their proper place.

Calvin's original doctrine of predestination, having become theologically insignificant, was corrupted through the desire of the faithful to give cosmological significance to what they were already doing. The wealth they were busily acquiring was given a religious rationalisation and made into a sign that they were of the elect. But feeble though this rationalisation is, much can be done with it if it is stood on its feet in the ground where it emerged.

In the uncertain conditions of early capitalism, before market patterns became established, traders were bewildered by events. At one time they threw piles of commodities onto the market, saw the lot purchased and made handsome profits; at other times nothing was saleable. So the Calvinists among them reasoned the social situation into their religion. The following quotation expresses the relationship between the ideas of ascetic protestantism and capitalism more clearly than Max Weber ever did:


Calvin's creed was one fit for the boldest bourgeoisie of this time. His predestination doctrine was the religious expression of the fact that in the commercial world of competition success or failure does not depend upon a man's activity or cleverness, but upon circumstances uncontrollable by him. It is not of him that willeth or of him that runneth, but of the mercy of unknown superior economic powers . . .

The history of Calvinism illustrates how those who now advocate the reform of religious, political or social institutions should beware. The most sophisticated reforms may be turned against their advocates by the operation of an incorrigible social system.

Calvinists may have helped bring capitalism into being; we have to bring it to an end.