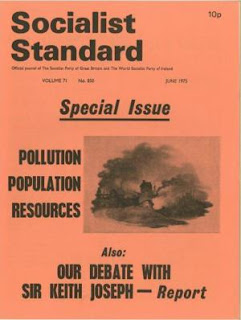 From the June 1975 issue of the Socialist Standard

Much has been written and said about the problem of waste — savings which could be achieved, environmental problems alleviated.

The solutions advanced by different factions are often valid in themselves. However, each pre-supposes the co-operation of a number of parties with different, or even conflicting interests which, under capitalism, is only possible in a very limited way. Also, it is necessary to define what we mean by waste, as savings in one respect can mean waste in another; savings on raw materials often means waste of manpower. Saving of energy may be costly in cash terms; the often invoked re-cycling leads to waste of energy and manpower. It is the intention of this article to illustrate some of these contradictions.

Mr. Giles Shaw in a debate on waste in the House of Commons on 5 April 1974 stated that in the generation of electricity from coal 40 per cent. of the heat is lost. Of every million tons of coal burnt, the equivalent of 400,0000 tons produces warm air and steam dissipated in the environment. Mr. Hugh Rossi, in the same debate, told the House that in Dusseldorf a new incinerator disposes of the refuse of 700,000 people, making a profit by the sale of steam for space heating and the use of ash for land filling.

Much was heard recently about the Friends of the Earth who collected empty pop bottles and, in protest against the bottles, not being re-cycled, dumped them on the doorstep of the firm well-known from their advertisements as "SCH . . . " Speaking at a conference War on Waste, Mr. Ron Cook, Marketing Manager of United Glass, warned that while glass can be re-used the process can result in waste of petrol, labour and energy. But in Kansas it has been found profitable to build several miles of State highway using glass waste as aggregate.

Mr. Shaw, in the previously mentioned debate, also said that, of 17 million tons [of] household waste, 85 per cent. is dumped. Indignant people write to newspapers complaining that Local Councils show little interest in their efforts to save paper etc. To them it is a straight forward issue and the complications imposed by capitalism escape them. The re-cycling of paper which could save raw materials will mean transportation, sorting and storing involving costs which sometimes outweigh the original savings. The removal of labels, adhesive tape etc. from polythene and cans, for example, may cost more than the saving on raw materials. The cost to Local Councils of doing this cannot be offset by savings achieved by manufacturers and the people who write letters would probably be the first to complain of 1p on the rates to pay for reclamation.

Excessive packaging has also come under fire, yet here the issues are often even more complicated. Many products packed in aerosol cans would be less convenient in any other way. So, if you want the product, the basic oncost of, say, 5p, is inevitable. However, to make the product stand out from those of his competitors, the manufacturer may use a special-shape can and closure. These raise the cost of packaging to between 8p and 10p. The gimmick in no way improves the product, but the customer pays the price to keep the manufacturer in business.

Often criticisms of apparently wasteful food packaging ignore the extra protection and convenience. However, here too it is true, particularly with confectionary and toiletries, that materials are often used vastly in excess of the needs of protection and distribution so that the package may shout 'Buy ME!'

In this article we have shown a few of the many-sided problems of waste under capitalism. The criticism is often levelled at the Socialist Party of Great Britain that the complexities of modern life make the workings of Socialism impossible. Here is one aspect where we can state categorically that Socialism will be easier to administer than the present system. In a world of common ownership, with the elimination of cost and profit considerations, the disposal (or reclamation) of waster, of whatever kind, will be simpler and more efficient than it is to-day.