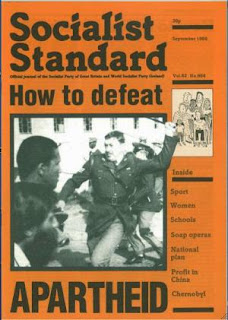 From the September 1986 issue of the Socialist Standard

Early last year pork rationing was reintroduced into most of the largest cities in China, after having been phased out a decade before. In Beijing and Shanghai, for instance, the monthly ration is one and a half kilograms of pork for each person. It is possible to buy pork in some shops without ration coupons but at a higher price, naturally. The reason for bringing back rationing is an unexpected shortage of pork: in 1984, 20 million fewer pigs were slaughtered than in 1979 And the reason for this shortage is the familiar one of profit and loss. Farmers in China simply make more money from growing grain or raising rabbits than from raising pigs, so pork production has declined in favour of more profitable occupations.

Then in May 1985 the government decided to bring Beijing into line with most of the rest of the country by removing price controls on many everyday items. Overnight, the price of 1.500 food items rose by an average of 30 per cent, but in some cases the rise was much higher, with beef, for instance, more than doubling. This was accompanied by an income subsidy for residents of the city, but most were still left out of pocket. Panic buying before the rise led to serious shortages and scarcity prices for vegetables, and the Beijing City Council had to restore the controls and subsidies for vegetables. Again, the shortage had been exacerbated by farmers switching to more profitable crops than cabbages and cauliflowers. A government spokesman explained the price rises as aiming at "encouraging production through the law of value", passing over their effects in decreasing people's living standards. As under capitalism anywhere, production priorities in China are clearly determined by considerations of profit not of human needs, and so play havoc with any attempts at economic planning.

Deregulation of prices naturally opened the way to profiteering of one kind and another. Some shops mixed fat and lean meat, selling the result at prices prevailing for lean meat. The get-rich-quick atmosphere led to some factories producing useless and even dangerous fake drugs and medicines, which were sold at vast profits. (At the same time, hospitals experienced shortages of genuine essential drugs; Beijing hospitals can obtain only half the amount of insulin they need to treat diabetics) There have been plenty of other examples of workers buying shoddy and lethal goods, backed up by ludicrously exaggerated advertising claims from unsafe electric fans to drink laced with industrial alcohol and tape recorders that break down and prove to have worthless guarantees. All are produced in the name of profit, not of satisfying human need.

The rivalry for profits between industrial concerns extends to competition among different places in China. For instance, the old industrial centre of Shanghai is falling behind its younger competitors and new local government bosses have been installed there to try and reverse the situation. And of course, an economy where the driving force is profit needs some policy for factories and other enterprises which, for whatever reason, cannot make a profit. Various government branches are at present discussing a bankruptcy law which will allow for enterprises to be closed if they make a persistent loss. Already the north-eastern industrial city of Shenyang has enacted its own bankruptcy regulations and has declared officially bankrupt one factory whose fate was sealed by its unpaid debts. No matter whether anything socially useful was being produced capitalism cannot maintain production in the absence of profits.

In 1985 China had a staggering trade deficit of 15 billion US dollars, caused by a huge increase in imports being matched only by a negligible increase in exports. The ruling class have realised the threat this deficit poses to their continued prosperity and so are attempting to boost exports, by insisting that the goods produced should be competitive on the world market in terms of quality, delivery date and price. So a major priority is the production of commodities for export at as low a price as possible, in order to reduce the trade imbalance. Fluctuations on the world market — the vagaries of capitalism, in other words — will have a clear influence on China's domestic economy. It is because of its dependence on the globe economy that China has recently applied to join GATT, the General Agreement on Tariffs and Trade, which attempts to regulate the conditions of international trade.

Shareholding is no longer denounced in China as a capitalist vice, for shareholding and joint stock companies openly exist, albeit as a very peripheral part of the entire economy. A department store in Beijing issued three million shares, which were bought by various state-owned organisations. In other cases, workers in an enterprise are permitted to buy some shares in it. The state is likely to remain the largest shareholder in companies run on these lines — but clearly profit will be the dominant theme in their activities. Legislation is in progress to ensure that stocks and bonds can be inherited.

It goes without saying that the benefits from all the hard work of Chinese workers won't be theirs. The economic editor of Beijing Review complains that some organisations

have started providing their workers and staff with money for decent clothes and a free lunch every day. Such practices may seem trifling, or even in the best interests of the workers and staff members. But the results are horrible. If every worker in the country were given a daily free lunch, it would cost the state 18 billion yuan a year. If that were to happen, how the state finances would suffer!

And how the workers suffer from a system of profit and exploitation!

The appalling housing situation, for instance, means that 90 per cent of newlyweds must live with parents, in flats which are already grossly overcrowded and allow the minimum of privacy. In Shanghai alone. 100,000 families are in need of rehousing, while in the whole country only 350,000 were rehoused between 1979 and 1982. With the population increasing, the housing shortage can only get worse.

Whatever its form and whatever the mix of private and state ownership, capitalism everywhere can never be run in the interests of the workers.
Paul Bennett
Posted by Imposs1904 at 10:18 PM