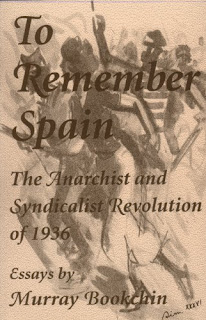 Book Review from the January 1997 issue of the Socialist Standard

To Remember Spain: The Anarchist and Syndicalist Revolution of 1936. Essays by Murray Bookchin (AK Press £4.50.)

This pamphlet consists of two essays: "An Overview of the Spanish Libertarian Movement" and "After Fifty Years: the Spanish Civil War".

Bookchin’s view of the Spanish Civil War is made clear from the outset. In the preface he describes it as "the greatest proletarian and peasant revolution to occur over the past two centuries". Compared with similar struggles in Italy, Germany and Austria, he writes that the Spanish working class and peasantry put up a massive, brave and organised resistance to the forces of fascism in the guise of Franco's military uprising. Bookchin views the Spanish Civil War not as a struggle to defend a discredited and treacherous republican regime but to create a social revolution in Spanish society. Much literature on Spain has tended to play down the more radical forms the conflict took, with the so-called Communist movement at the forefront of this camouflage.

As its title would suggest, much of the first essay deals with the development of the Spanish Anarchist movement, its structure, attempts at democratic control and how these varied from the countryside to the more urban areas.

The remainder discusses the problems of building a mass libertarian movement in the circumstances which have changed since the time of the Spanish Civil War. Bookchin highlights those changes and the limitation of unions, syndicalist as well as reformist. He outlines the capacity of the capitalist system to condition the working class through institutions like the family, school, religious organisations, the factory and trade unions. The system teaches workers obedience, hierarchy, the work ethic and authoritarian discipline and these also have their effects on organisations formed to try to emancipate workers from capitalism. Employment, (although Bookchin uses the term "factory"), and the class organisations that spring from it, are seen as most important in instilling docility in workers, manifesting itself in a commitment to hierarchical organisations and authoritarian leaders with the result that most militant groups and situations can be bought off to serve the interests of a reformist labour bureaucracy.

Bookchin does not provide clear-cut answers to these problems, nor would we expect him to do so, but while socialists may not always agree with the attempts to formulate a solution he does make, this sort of discussion should be of concern to all of us attempting to build libertarian forms of organisation that can begin to challenge capitalism.

In the second essay Bookchin argues against the view of the so-called Communists that Spain was too economically backward for a socialist/anarchist revolution. He sees this as just an excuse for the reactionary role they played in destroying the more radical elements in the civil war in the interest of the dictatorship of the state capitalist Soviet Union, adding that if Spain in 1936-9 was too economically backward then so was Russia in 1917. The more radical initiatives which the "Communists" helped to destroy is well documented as is the reactionary role of popular frontism. What is not considered is the implications of their isolation in one country. The causes of the Civil War are considered by Bookchin to be cultural as well as economic.

The second essay also gives an interesting account of the depth of what has been called the Spanish revolution. In the Catalonia region it is estimated that three-quarters of the economy was under "workers’ control" and in what are described as "the more thoroughly anarchist areas” especially among the agrarian collectives, money was eliminated and the material means of life were allocated according to need rather than work, but it is clear that the circumstances varied from region to region.

Whilst sometimes Bookchin uses the terms socialist and Marxist in, to say the least, irritating ways this pamphlet is still well worth reading. It is certainly an encouragement to find out more about the “Spanish revolution" if your knowledge of it is limited. Some may feel Bookchin overstates the significance of the Spanish Civil War or the depth of support for the more radical movements within it What cannot be denied, even sixty years on, is that it was an event of enough significance to analyse and learn from.