Between the Lines: Miner distortions (1985) 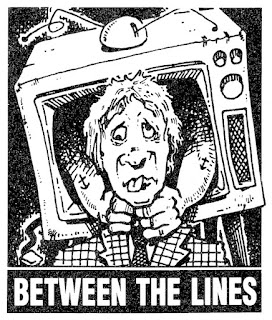 Most people these days find out what is happening by watching the news on television. As is usually the case when there is a conflict between wage labour and capital, the TV news about the miners' strike has struck a fair balance between lies and omission. Recently the letters column of the Guardian contained several letters from outraged media-watchers who are appalled by the way in which facts were distorted and events presented in a one-sided manner. What do such people expect from TV news? Can you imagine a newscaster coming on the screen and announcing that a strike has occurred because the employers broke a written agreement with a trade union? Is it likely that TV news editors are going to go out of their way to ensure that the propaganda of the bosses is not swallowed by the gullible public? The fact is that the function of the so-called news is to inform workers in accordance with the general requirements of the system.

For readers wanting an example of the fairness of the TV news in relation to the miners' strike, here is one to be getting along with: In November of last year a certain strike-breaker (sorry, rebel) by the name of Barry Newton became famous in the North East because he was trying to lead a back-to-work campaign in the Durham area. Newton alleged that he was attacked by three men in balaclavas who threw ammonia in his face. A disgusting and unjustifiable crime, without doubt. The TV news programme in the region lost no time in showing the alleged tactics being used by supporters of the strike and exhibiting Newton as a hero. In February this year Newton was taken to court for wasting police time. It turns out that police investigations showed that the allegations were without foundation. But did the TV news presenters and the journalists on the regional newspapers carry equally big stories in February as they had run in November? Of course not; and. needless to say. the news editors who have deceived people by omission, will not be charged with wasting workers' time. How many striking miners will learn as a result of seeing television's distortions of their strike that you can never trust what the bosses' media tells you?

What exactly are the characters in Dallas up to? I mean, what are they actually doing in life? Every week millions of us stare at the images of J. R. Ewing and his self-righteous brother. Bobby, swivelling on their big leather chairs on the top floor of the office block which they own — but what do they go into the office to do? Whenever we see them they are engaging in Big Deals with gullible Texan oil magnates or else tricking their best friends into bankruptcy, bed or both. But what is the function of the Ewings?

Now, we all know that Betty Turpin in Coronation Street is there to sell beer and that Benny Hawkins in Crossroads is employed to mow Mr Hunter s lawn. The Ewings of Dallas seem never to do anything of the slightest social use. There is a reason for this. The characters being portrayed are businessmen: in fact, the Ewings are into Big Business. And being a family of capitalist millionaires (the brothers inherited the oil company when Jock Ewing's contract ran out and he was killed in a mysterious plane crash), the function of the Ewings is not to make anything or care for anyone or organise anything — they just sit there in a perpetual state of parasitical idleness, tricking and gossiping and screwing. And we, the workers who don't swivel about on leather chairs all day nor have Mexican waiters running in with classy cocktails every time we fancy a drink, are expected to admire the Ewings, to identify with them and even to feel sorry for them when business is not going too well

In the first programme of the interesting ITV series Television we saw a group of South American peasants huddled around a television set (the only luxury in their slum home) and getting excited about the privileged happenings in Dallas. Such entertainment is a powerful opium offered by our bosses to keep the minds of the workers away from the reality of our own social problems. What they are saying to us through offerings like Dallas is "If you want luxury you can't have it, because it's only obtainable for the few. but as a compensation prize we'll show you snippets of other people living in affluence and you can switch into such a fantasy for an hour every week".

Some time ago somebody attempted to shoot and kill J. R. Needless to say, the boring old millionaire lived to sign a new contract and make a new series and so we are still receiving our weekly ration of boring tales of the Texan scroungers. They are not the only capitalists put on show for us to watch: on another night of the week we can try to identify with the bores of Dynasty and a few years ago, for those who like to be the passive observers of home-grown parasites, there was Brideshead Revisited. Instead of escaping into the fantasy worlds of other people's luxury the millions of workers who regularly switch on to such programmes would do better to consider the possibility of a society in which we can all live life to the full.

On 4 February Brian Montague, a member of the Belfast branch of the World Socialist Party (Ireland) appeared on the Channel Four Comment programme and stated as cogent a case for socialism as could be fitted in to the few minutes available. Which goes to prove that British television is balanced and democratic: after all. what more can we ask for than four minutes to put the argument for socialism against the countless hours each week devoted to putting the daft political, religious and cultural ideas and values of world capitalism?
Steve Coleman
Posted by Imposs1904 at 7:24 AM