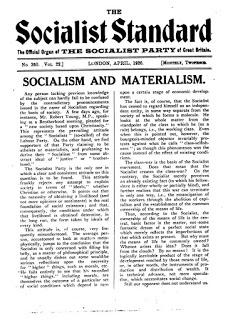 From the April 1926 issue of the Socialist Standard

If the Socialist Party’s policy can be summed up in a phrase, that phrase is "no compromise”; we are not phrase-worshippers, however, and therefore wish our phrases to be clearly and definitely understood.

The Socialist Party opposes all other political parties without exception, "whether alleged labour or avowedly capitalist.” The necessity for a party which is out for Socialism arises from the fact that the existing social order, which we call capitalism, holds no prospect of improvement for the majority of the population—the working- class. Parties which openly exist to preserve that social order, with or without modification, are therefore so many barriers to be surmounted before our goal can be achieved.

The simple, easily intelligible, fact is, nevertheless, frequently made the subject of misrepresentation on the part of some of our opponents. "Half a loaf is better than no bread" we are told, and the outsider is sometimes misled into thinking that the Socialist Party has a conscientious objection to accepting half-loaves, and he is seldom slow in voicing his contempt for such (quite imaginary) “pig-headedness" on our part. We have often observed, however, that people who lightly accept this view of the matter are not to be trusted to distinguish between half-loaves and packets of sawdust —between measures that might conceivably benefit the workers for a short period to some slight extent, and measures which merely tighten up the machinery of capitalist administration at the expense of the workers.

We have exposed in these columns times without number the fraudulent character of the reforms advocated by "progressives” of all shades, from the old-age pensioners and insurance schemes of Liberals to the nationalisation projects of the "left wing,” but we still find trustful souls who believe in the possibility of getting "something now.” These good people are simply in a fog. They do not realise that "now" the workers are politically powerless and will remain so until they organise as a class for the establishment of Socialism. To expect "something now" is to expect charity from the master-class. It is to fly in the face of history, which shows that such concessions as conditions have allowed the workers to wring from the masters in the past lose their value with the progress of industry. The victories of Trade Unions in their early days, resulting in shorter hours and higher wages, have been neutralised by the improvement in machinery and productive methods, speeding-up, intenser exploitation and more unemployment.

Not only is this the case, but even the ability of Trade Unions to obtain such concessions grows manifestly less with the increased concentration and international organisation of capital. Yet in spite of this we find individuals, in the name of “Communism,” encouraging the workers to “demand,” from the capitalist state, £4 per week and a 44-hour slavery!

If economic laws could be legislated out of existence, if capitalism could be made to serve the interests of the workers, then there would, indeed, be no case for Socialism. It would long ago have perished, a sterile Utopia. The work of Marx, ignored by the “Communists” who pay him lip-homage, was to emphasise the inability of governments to work miracles. Relying firmly upon political action, he stressed the need for understanding the conditions and essential limitations of that action. It is characteristic of the inverted logic of the “ Communist ” and “minority movers” that in one breath they avow their contempt for Parliamentary procedure, and in the next call upon the workers to send in petitions—to the House of Commons!

The Socialist Party is out to obtain all that can be obtained for the workers under capitalism. We know sufficient of capitalism, however, to realise that the only way to obtain the smallest advantage is to oppose the enemy, both on the economic and political fields. We do not propose, to give our support in exchange for a mere promise—and the more the enemy concedes the harder we shall hammer at his fortress, i.e., working- class ignorance, apathy and disunity. The political supremacy of the workers will only be achieved by organisation for an object which will unite, inspire, and enlighten them. That object is Socialism—our object.

Other parties may tell you fellow-workers that if is their object also—“ultimately"; but you will, if careful, notice that they do not make it a plank in their election addresses. They cannot find room for it. They have too many requests to make of the master-class to propose to abolish them.

Fellow-workers, we apologise to no one for our existence as a party. We have watched for years the baffled efforts and disappointed hopes of sections of our class, acting in ignorance of important factors in their problems. It is our mission to make those factors clear, and we invite you to study our literature, come to our meetings, ask us your questions, confident that when you. understand our case you will join us.