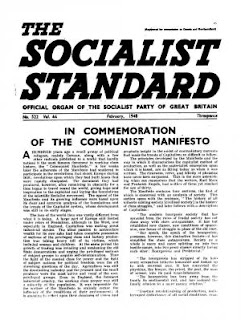 From the February 1948 issue of the Socialist Standard

The Presidential election in the United States is due this year. The difference between tiie Democratic and Republican policies is so small that the intrusion of Henry Wallace, as third candidate, seems to many as the only alternative for the workers of the United States.

Mr. Henry Wallace, one-time vice-president to the late President Roosevelt, claims to speak for the “freedom loving people “and against “the reactionaries in the Democratic and Republican Parties." His present pro-Russian leaning has ensured him the support of Moscow’s overseas agents, the Communist Party. The London Daily Worker greeted him in no uncertain terms when he announced that he would stand for President.


“The basic significance of the Wallace decision is that the flag of a real democratic American policy has at last been raised in the United States in the form of a challenge to the Presidency.’’ (Daily Worker, 1/1/48.)

This friendship of the Communist Party however, may lose for Wallace the support of the rival radical faction—the Americans for Democratic Action (led by Eleanor Roosevelt). As the Observer (4/1/48) put it: “Mr. Wallace has forfeited the support of all true progressives and intelligent conservatives in the United States.’’ Already the Political Action Committee of the trade union federation, the C.I.O., has refused to endorse his candidature. As the C.I.O. in an election only supports what it considers the “friends of labour ” it is apparent that Henry Wallace, even in their eyes, does not compare too favourably with their rival candidates. This does not come as a surprise to the Socialist movement. Socialists have seen before these radical rockets careering through the sky, who, despite their electioneering speeches, prove in power to behave like the rest of the capitalist politicians. Mr. Wallace —out of power—speaks of the sinister activities of reactionaries who support the Marshall Plan, though he conveniently does not mention his own editorial commenting very favourably on the nomination of General Marshall for Secretary of State.

As an old New Dealer he stands for private capitalism with a certain amount of State intervention which he calls “economic democracy.” But occasionally Henry lets the cat slip out of the bag. In an interview he was asked by Mr. Dwight Macdonald (editor of Politics): “What do you mean by ‘economic democracy’? ” Mr. Wallace answered: “I’ve written a lot about that. But one thing I mean is a mixed economy—as much corporative, small business, cooperative and government ownership as will produce the goods. I wouldn't allow strikes in government-owned industries; we’ve got to find some better way.” (Politics, March-April, 1947.) These are indeed fine words for a man who, in the opinion of the Daily Worker “represents the democratic aspirations of millions,” but the Communist Party always have had their private definition of “ democracy.”

So we can see that Mr. Wallace certainly does not stand for Socialism and the interests of the working class. When, during the thirties, he was Secretary for Agriculture he showed himself to be the friend of the large farmers. Incidentally, both Mr. Wallace’s father and grandfather were large-scale farmers. When the economic crisis broke out in the United States in 1929 agriculture was hit even worse than industry. Even during the “prosperous” twenties agriculture was worse off than industry. The farmer had to sell his commodities at low prices and buy manufactured commodities at high prices. Therefore when Mr. Wallace became Secretary for Agriculture his aim was to raise agricultural prices. In the words of Mr. George Peek, the first administrator of the Agriculture Adjustment Administration, “the sole aim and object of this Act is to raise prices.” The Act which Mr. Peek was referring to was the Farm Relief Act (12/5/33). This Act was in two parts. The first part set up the A.A.A. This gave substantial payment to farmers on condition that they destroyed and restricted their production of all the basic farm crops and products in accordance with the proposals of the Department of Agriculture. The second part of the Act was the Farm Credit Administration which allowed farmers loans at low interest to pay off their existing mortgages. As can be seen this Act by Mr. Wallace and the New Dealers had no benefits for the working class or the thirteen million people in tenant farm families or the three million in sharecropping families. The Act only helped the owners of land. In fact it brought about a greater concentration of ownership and reduced many of the tenant farmers to mere wage-labourers.

Therefore it is apparent that whatever may be the result of the presidential election in the United States the working class will be in the same predicament— wage labourers. The workers of the United States and the rest of the world will not arrive in Easy Street by giving their allegiance to politicians of the calibre of Mr. Henry Wallace. What the workers must do in every country of the world is to form Socialist Parties whose only object is the common ownership and democratic control of the means of producing and distributing wealth. The only party in the United States worthy of working class support is the Workers’ Socialist Party (companion party of the S.P.G.B.).

Those supporters of Wallace who call themselves Communists should recall the words of Marx in the Address of the Central Council to the Communist League:

“But they themselves will have to do the most for their final victory by becoming enlightened as to their class interests, by taking up their own independent party position as soon as possible and by not allowing themselves for a single moment to be led astray from the independent organisations of the party of the proletariat by the hypocritical phrases of the democratic petty bourgeois.” (Karl Marx, “ Selected Works,” Vol. 2. Published by Lawrence & Wishart. P.168.)

He joined via the Islington Branch of the SPGB, and resigned in '49 to join Harold Walsby's Social Science Association. The question is: was Clark always a supporter of Walsby, even when he originally joined the SPGB in 1944? There were substantial accusations that Walsby and his supporters played an entryist role within the SPGB during this period.