Capitalism and the Socialist (1943) 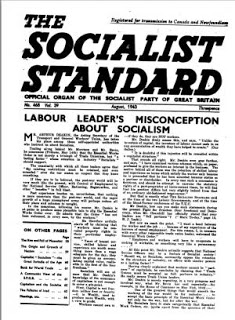 From the August 1943 issue of the Socialist Standard

Every day, numbers of workers make their first acquaintance with the Socialist Party of Great Britain. Their response to our case is naturally a varied one. Many, hearing our speakers or reading our literature for the first time, are immediately impressed with the soundness of the views we put forward. Others, on the other hand, particularly those irritated by criticism of long-held beliefs and fondly cherished illusions, react with just as immediate an hostility. Of the remainder, some are apathetic, their interest slight, and their acquaintance with us is as slight as their interest. Others, in widely varying degree, acknowledge the validity of many of our arguments, but disagree with us on some points. Whatever their reactions, however, whether they be friendly or hostile, one feature of our propaganda appears to draw their comment sooner or later. It is our constant reiteration of the fact that the cause of the majority of the evils with which the working-class are to-day so miserably and persistently afflicted is to be found in the Capitalistic nature of modern society.

We make no apology for this “preoccupation" of ours with Capitalism. If it is our position that Capitalism alone is responsible for the problems now confronting the working-class, it is obvious that we must of necessity make frequent, and repeated references, in all our propaganda, to that system and the effects to which it gives rise. The chemist, in his experiments and investigations has constant occasion to refer to the ninety-two elements of which all matter is known to be composed. In similar manner, the Socialist, in his own investigations, must make frequent mention of those elements which go to make up present-day society.

At this point, we must make it absolutely clear that, regardless of our own attitude to it, the Capitalist system is a fact. It is not the creation of an abnormal Socialist imagination, devoid of all basis in reality. It is not a bogey, raised by us to frighten normally contented workers into supporting us in our various activities. Although we are the only party that, stands for the total abolition of Capitalism, we are not the only organisation that makes attacks upon it. All kinds of organisations and all types of individuals are continually making efforts to reform and improve it. Even the Capitalist class itself, through its various organs of propaganda, through its apologists and its "stooges" takes great pains to convince the workers of its merits and the manifold benefits it confers upon them. True they refer more to “private enterprise” and "incentive” and “competition" and “self-interest" than they do to Capitalism, but to politically intelligent workers they are all parts of the same parcel. Political economists of all shades of opinion have argued about it, apologised for it, praised it or attacked it for the last hundred and fifty years or more. Every day, the City and Financial Editors of the daily newspapers comment upon and interpret in their various ways the many fluctuations which disturb its already ruffled surface. Nor are many of their comments distinguished by lack of frankness.

Thus, whatever varying and conflicting opinions they may hold as to the implications of Capitalism for the working class, all are agreed on its reality.

Which brings us to our last point; the implications it has for the Socialist. Briefly they are as follows: —


These conditions will exist as long as Capitalism exists. They will only be ended when the working-class, acting in unison and with understanding, take hold of political power, dispossess the Capitalist class of its ownership of the means of life and make them the common property of the whole of society.

The task of the Socialist is to convince his fellow workers of this, their task.