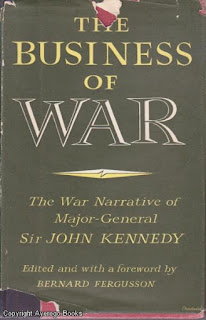 Book Review from the December 1957 issue of the Socialist Standard

One day in November at the Royal Albert Hall 1,250,000 poppy petals were dropped from the roof at a ceremony attended by the Queen.

"One for every British serviceman killed in action from August, 1914 till today,” says the Sunday paper.

Twelve years have passed since the end of World War II. This allows fair time for Generals and “Statesmen” to retire to the safe security of their generous pensions, and eventually “die in bed,” as Sassoon wrote in the first lot.

Those holding top-jobs then, can now blow the gaff, give the game away, always providing, of course, that it exonerates them and incriminates the others.

Despite the shocking straits to which inflation is supposed to have reduced the rich, there are still a few with 25s., 35s. or 45s. to chuck away on some bag of tripe purporting to reveal war time secrets.

This makes it quite a tasty racket, especially if you’ve nothing much else to do except fish salmon or grow cacti.

More than one ex-general has turned to tales out of the War Cabinet school, for a little bit of extra.

Actually, they’ve really nothing much to say. It may have taken a little longer, but the pattern of recrimination after the Second approximates to those of the First.

Then it was Lloyd George sacking Douglas Haig, this time Churchill doing Wavell. (Threatening “to have him shot”). After Churchill himself had saturated the market with whitewash, there was a chance for smaller fry to lick up a crumb or two.

Lord Alanbrooke and Sir John Kennedy (Director of Military Operations 1940-43) are among those for whom the pen is now meatier than the sword.

Kennedy, in his book The Business of War, 25s. (was ever a book better named?), reveals what took place at the week-end parties at Chequers, the P.M.’s country residence from which the War was actually run.

If his tale is to be believed, the dining and wining  was usually accompanied by sundry angry outbursts by Churchill denouncing and upbraiding the daft generals in charge of the British Armies.

His chagrin at Wavell's inability to deal with Rommel did not prevent him, it seems, from doing justice to the liquor. “Churchill continuously called for more champagne” (while the men in the Western Desert were drinking their shaving water). “He remarked that it was very good stuff—he said he had thought of giving up cigars until the Germans were out of Cyrenaica—but changed his mind a few days later. Why should he give up cigars or snuff for any German.” (Evening Standard, November 4th, 1957.)

“Victory in Crete is essential,” “Hurl reinforcements into Crete.” “What about a stroke in the Western Desert,” etc.

According to this General, the Prime Minister was in the habit of telephoning junior officers at M.I.5, or some other secret war department and enquiring, behind the back of those in charge, how things were going. It was somewhat after the manner in which the late Mr. A. W. Gamage used to snoop on his staff at his store.

“At the evening at Chequers,” Kennedy says “After dinner Churchill walked up and down.”

“My plan for winning the war is this,” he said a little later, “One thousand tons of bombs a night on Germany—we are only averaging 50 now—and 20,000 tanks or so ready to land all along the coasts of Europe.”

“At about 3 a.m. Churchill announced that it was time for bed, and coming up to me, he said, “I am going to have breakfast in bed—I advise you to do the same.”

“I certainly came out of this evening very badly,” says General Kennedy.

Eventually Churchill did sack Wavell and placed Auchinleck in charge.

When the tumult and the shouting dies, a little bit of the truth comes out. We are afforded a glimpse of what went on behind the scenes, through the cracks.

That great military strategist Churchill, like his Russian counterpart the self-appointed military genius Stalin (not to mention Zhukov) has been debunked by the generals. The same thing went on in Germany with Hitler and his generals. Churchill’s empty threats to have Wavell shot were obviously inspired by German practice and Nazi usage. Churchill was the more fortunate because generals who know that they are to be shot as political scapegoats, try to blow Fuhrers up with bombs.

Even appreciating attempts by wartime generals to do a Mark Antony on Winston Ceasar Churchill, our knowledge of the intrigues of the First World War, and the events in the enemy camp during the Second bear out the substance of the case.

While Hitler, Stalin, Churchill and Roosevelt were sacking generals in their blind fumblings to find a winner, like an old lady doing football pools with a darning needle, thousands of ordinary working folk were enduring the unspeakable horrors of modern war.

What are the qualifications for these “great men” except cold calculation, tireless loquacity, and a supreme egotism based on endless contempt for those who produce the wealth they so wantonly squander.

Like Napolean, who is supposed to have exclaimed as his heavily loaded Guardsmen sank into the icy Beresina, “Look how these toads struggle for their miserable lives,” he rates the working man at his own evaluation.

The spectacle of this phrase-monger, with his old brandy and choice cigars, at a time when his own experts declared that the war time ration of those doing the work had reached the limit; uttering wild statements at his dinner parties at Chequers, like his—

“I am going to have breakfast in bed.” Sixteen years later, when it has now got to the stage where some “Leader-Genius” or the other can exterminate an entire community by pressing a button, there are still far too many working people supporting poppy dropping and Remembrance days. Although they may have the very best motives, they unwittingly support Capitalist-Nationalism and the system which keeps them in Poverty and Peril, while generals denounce and expose politicians in past wars but not future ones.

Small comfort to the widow, great consolation to those children whose father happened to be one of the pawns (they call them “the prices”) that we paid a penny or two for a paper poppy, or stood still for two minutes on Sunday, when most of us are off work, so that the guv'nor doesn't lose the time.

The folly is to continue, after all this, one and a quarter million dead, plus all the illness, disease, and aftermath of war to go on supporting capitalism whether Churchill’s, Eisenhower’s or Khruschev’s.

In the world Socialist society people will not kill each other—they will help each other.

Until that day the sacrifice of those killed in wars will be futile.