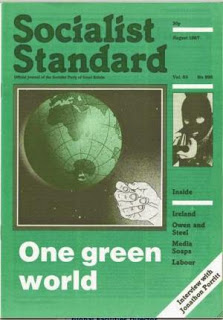 The Today newspaper, notable for its fuzzy colour and its equally fuzzy comment, has been sold to News International — another title to add to Rupert Murdoch's ever-expanding collection. It is perhaps an ironic consequence for a paper which, when it started, was seen as symptomatic of a trend towards a wider range of newspapers made possible by new technology and lower production costs.

In fact, Today was very quickly sold off to millionaire, Tiny Rowland, whose Lonrho company already owns the Observer, prior to its recent sale to Murdoch. The promise of a plethora of new newspapers has not been fulfilled. The concentration of ownership in the hands of a few media tycoons continues unabated. Once again the laws of capital have been more than a match for the potential benefits that could be obtained from advances in technology.


To a Labour Supporter

An appalling prospect, isn't it, the only consolation being the failure of the shamefaced Tories of the SDP? But we should not forget that what we are up against is not the twisted attitudes of one insufferable individual. What we are up against is a system which forces governments to give priority to profit-making over satisfying needs, whatever the personal attitudes of their members.

We've seen other governments — Labour governments, to be precise — composed of ministers committed to improving the lot of ordinary people being forced by the economic laws of the system to do just what the Thatcher governments have been doing: attacking wage and salary levels, cutting benefits, closing hospitals, charging for health care, wasting resources on arms, presiding over growing unemployment. The only difference has been that whereas Thatcher has been unrepentant about doing these things, Labour ministers have been apologetic about it but the end result has been the same. Living standards and social services have been cut to give priority to profit-making.

So what can we do to achieve a better society, one geared to meeting needs? An understanding that we are up against an economic system operating according to blind economic laws which not even governments can control or alter suggests that, to be effective, we should direct our energies at getting rid of that system rather than changing the personnel who preside over it.

At one time the Labour Party did claim to want to replace this capitalist system of production for profit by a socialist system of production for use even if this manifested itself more in words than in deeds. Now it merely claims to be able to administer the system in a more caring way than the Tories. Against the better inclinations of many of its ordinary members, it has employed the slick publicity tricks it once despised to present itself as a more acceptable, alternative government of capitalism. The Nice Party as opposed to the Nasty Party.

But this superficial approach to politics is self-defeating because, as experience of past Labour governments has shown, accepting to govern within the system means accepting in the end to govern, reluctantly or otherwise, in accordance with its economic laws. All governments end up being uncaring not because they are composed of uncaring people but because they are presiding over a system which, being based on putting profits before needs, is by nature uncaring. If we are to change things, then the whole profit system must go. In other words, socialism remains the only solution. Socialism — common ownership, democratic control, production for use and distribution according to need — is therefore an urgent necessity.

The best way — the only way — to advance the cause of socialism is to concentrate on advocating it. presenting socialism, and nothing but socialism, as the only solution to the problems ordinary people inevitably face under the present system in such fields as housing, education, health care and the environment. In other words, to get at the cause rather than seek to deal with effects; to advocate fundamental change rather than mere defensive action within the system.

In this way we work to build up the strong and determined body of socialist opinion without which the present system cannot be abolished and a better society achieved.

The poll tax, which received such little attention during the election campaign, has now rocketed to the top of the political issues charts as people begin to appreciate its implications.

The plan is to replace the present system of rates — a tax on property — with what the Tories have chosen to call a community charge — a tax on people. It is scheduled to come into effect in England and Wales in 1990 and in Scotland in 1989. The poll tax will be levied on every adult in the country irrespective of their ability to pay. The theory is that it will increase the number of people contributing to the cost of local services which, it is argued, will be beneficial both economically — 35 million poll tax payers as opposed to 18 million ratepayers — and politically. The political argument is that those who are at present not liable to rates have little incentive to vote for local authorities that will reduce public spending. In other words the government sees the poll tax as a means of increasing support for local Conservative politicians.

During the election campaign the actual consequences of the introduction of the poll tax were hardly discussed. Instead the focus was on the more appealing idea of the "abolition of the rates". In fact for many people the poll tax will leave them substantially worse off. Those who will benefit will be those who are most wealthy since, within any local authority area, everyone will pay a flat rate poll tax. So. for example, an average household in which there are two adults in Liverpool currently pays £500 a year in rates whereas on present figures the poll tax per person will be £301. The presence of a third adult in the household will mean that the total poll tax bill will increase by a further £301.

Those on low incomes will be able to claim a rebate of up to 80% of their poll tax charge and those living on social security benefits will have their income support (due to replace social security from next April) increased to cover the 20% which everyone must pay. However, they will receive 20% of the national average poll tax charge so they will be substantially out of pocket if they live in an area where the poll tax exceeds the national average.

The financial costs of the poll tax may well be so high that many people will attempt to avoid paying it. That shouldn't be too difficult: the problems of administering a system of poll tax on a highly mobile population are likely to be enormous and it has already been estimated that the new system will cost twice as much to administer as the rates. But the cost for those who do decide to opt out of paying their poll tax could well be disenfranchisement. The most reliable list of local adult residents is the electoral register which is likely to be used as a checklist for the collection of the poll tax. Many people faced with the prospect of paying community charges which they can ill afford, may decide that it is worth sacrificing their vote to avoid paying. Is this the increased choice that Thatcher promised us if she achieved her third term?
Posted by Imposs1904 at 8:04 PM