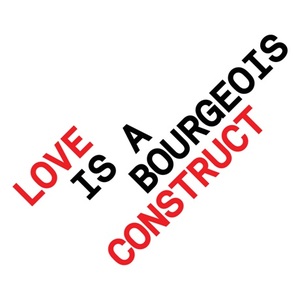 The Pet Shop Boys single Love is a Bourgeois Construct was released in September, and it is not too often that Karl Marx gets a mention in a pop song or we hear the word ‘bourgeois’.

The new single is reminiscent of the boys at the  peak of  their popularity and success with their songs about life in capitalism in Thatcher’s Britain such as  Opportunities (Let’s Make Lots of Money). In the new single they sing about  ‘searching for the soul of England, drinking tea like Tony Benn’.

They sing ‘love is a bourgeois construct,  it’s a blatant fallacy’ which is derived from a character saying of love ‘it’s a bourgeois fallacy’ in the 1988 novel Nice Work by David Lodge which is about the relationship between a feminist university lecturer  and an engineering firm manager. The novel  is a  pastiche of Elizabeth Gaskell’s Victorian ‘industrial’ novel of strikes in a cotton town, North and South.

The boys further add that ‘you won’t see me with a bunch of roses promising fidelity, love doesn’t mean a thing to me’. Alexandra Kollontai stated that ‘proletarian ideology cannot accept sexual exclusiveness and all-embracing love’, and that new socialist sexual relations would be ‘purified of all material elements, of all money consideration’.

They sing about ‘flicking through Karl Marx again’ which could be the Manifesto of the Communist Party by Marx and Engels where they write: ‘the bourgeois sees his wife a mere instrument of production’.

They also borrow the melody line of  Chasing Sheep Is Best Left to Shepherds by Michael Nyman which in turn is based on the ground bass from Henry Purcell’s 1691 opera King Arthur. Nyman’s music was for the 1982 Peter Greenaway film The Draughtsman’s Contract  which was a Lockean conspiracy thriller about class, sex, property and landscape set in the post 1688 bourgeois ‘glorious revolution’. John Locke’s 1689 Two Treatises of Government are the philosophical grounding of bourgeois capitalism: ‘master and servant are names as old as history, for a freeman makes himself a servant to another, by selling him, for a certain time, the service he undertakes to do, in exchange for wages he is to receive in the contract between them in civil society; the chief end whereof is the preservation of property.’ Later Greenaway dissected capitalism in Thatcher’s Britain in his 1989 The Cook, the Thief, His Wife and Her Lover.

The Pet Shop Boys clearly see the links between capitalism and the ideology of relationships, singing ‘while the bankers all get their bonuses, I’ve given up on the bourgeoisie, like all their aspirations, it’s a fantasy, you made me see reality’.
Steve Clayton
Posted by Imposs1904 at 11:04 AM

In the interests of the blog, I had a listen to the single. Nah, no dice. Pleasant but bland, and the lyrics would have Nicky Wire spluttering on his rum and coke. Stick to last century Pet Shop Boys if you're an old geezer like me.

PS - And I'm in a minority of one in thinking that Pet Shop Boys best ever single was 'Love Comes Quickly'.