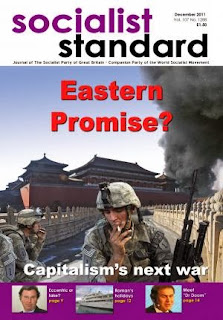 From the December 2011 issue of the Socialist Standard


Capitalism’s war drums are never silent. They are always pulsating in the background. At certain times they become more strident—now is one of those times.

Only the incurably naive believe that capitalism is possible without war. Warfare is as intrinsic to capitalism as are its prices, wages and profits. The subtext of Angela Merkel, the German Chancellor’s, warning about the collapse of the Euro that: “Nobody should believe that another half century of peace in Europe is a given — it’s not,” (Daily Telegraph 9 November) reveals that material factors such as access to markets and resources, and the protection of trade and trade routes, rather than ideological reasons are the root causes of war.

The prospect of conflict with Iran frequently makes the news. Apparently, like Iraq, they’re busy developing nuclear weapons. But Iran is also situated in a strategically important area to Western powers. On 3 November the drumming increased when the Guardian warned it had learned that: “planners expect any campaign to be predominantly waged from the air, with some naval involvement, using missiles such as the Tomahawks. . . There are no plans for a ground invasion, but “a small number of special forces” may be needed on the ground, too”. The BBC reported six days later that Russia’s foreign minister, Sergei Lavrov has warned that: “Military action against Iran would be a ‘very serious mistake fraught with unpredictable consequences’ . . . His comments come after Israeli President Shimon Peres said an attack on Iran was becoming more likely”. Just to underline how volatile and dangerous capitalism is, one day later, as the BBC also reported, Leon Panetta, the US Defence Secretary, commenting on a strike against Iran, also warned that it could have “unintended consequences”.

Securing energy supplies is a basic condition for the continued existence of every nation state. The media delights in reporting the discovery of new oil fields and estimating the find in billions of barrels of oil. To put these finds in context; a billion barrels of oil will last the world at current rates of consumption—just 12 days (oilprice.com 9 November). Most studies show that existing supplies will not meet capitalism’s future needs. Thus struggles for access and control of them are inevitable.

Consequently, the drums are echoing around the Arctic region as it looks set to become the next battleground in the scramble for profits. Global warming is rapidly melting the icecaps making shipping routes more accessible and the prospect of exploration virtually certain. Time for agreements between the competing NATO members, Canada, Norway, Denmark, Greenland, the US; and Russia is diminishing. Accordingly Timeworld could report on President Putin’s speech to his political party that: “Russia intends without a doubt to expand its presence in the Arctic. We are open to dialogue with our foreign partners … but naturally, the defence of our geopolitical interests will be hard and consistent.” The next day Putin’s defence minister, Anatoly Serdyukov, announced that: “two army brigades, or up to 10,000 troops, would be deployed to defend Russia’s claims to the Arctic” (8 July).

The industrious US Defence Secretary Leon Panetta had earlier located more potential problems for capitalism. This time with another major competitor—China. The New York Times could report that: “earlier this month, Mr. Panetta was blunt about his worries. “We’re concerned about China,” he told American service members in Naples, Italy. “The most important thing we can do is to project our force into the Pacific — to have our carriers there, to have our fleet there, to be able to make very clear to China that we are going to protect international rights to be able to move across the oceans freely” (23 October).

The war drums were at their most raucous when The Global Times, published under the authority of the central committee of the Chinese Communist Party, printed the headline “The time to use force has arrived in the South China Sea; Let’s wage wars on the Philippines and Vietnam to prevent more wars.” It went on to stress that: “The South China Sea is the best place for China to wage wars. Of the more than 1,000 oil rigs there, none belongs to China; of the four airfields in the Spratly Islands, none belongs to China; once a war is declared, the South China Sea will be a sea of fire” (UPI, 3 October).

Noam Chomsky has drawn attention to the construction of a US military base on Jeju Island, 50 miles southeast of South Korea’s mainland which will “host up to 20 American and South Korean warships, including submarines, aircraft carriers and destroyers, several of which would be fitted with the Aegis ballistic-missile defence system”. He goes on to add that: “Not surprisingly, China sees the base as a threat to its national security. At the very least, the base is likely to trigger confrontation and an arms race between South Korea and China, with the US almost inevitably involved” (Truthout 7 October).

China, over the last decade, has been making major inroads into East Africa. And it isn’t just the prospect of cheap, unorganised labour that attracted them. UPI reported on 10 March last year that: “East Africa is emerging as the next oil boom following a big strike in Uganda’s Lake Albert Basin. Other oil and natural gas reserves have been found in Tanzania and Mozambique and exploration is under way in Ethiopia and even war-torn Somalia”. It is: “the last real high-potential area in the world that hasn’t been fully explored”.     However, the Economist could warn just 21 days later that: “several jealous Western governments and companies want to stall China’s advance into the Congo basin, with its vast reserves of minerals and timber”.

John Pilger writing in the New Statesman about President Obama’s “humanitarian mission” to go to the aid of the Ugandan government in its battle to defeat the “fewer than 400 fighters” of the Lord’s resistance Army (LRA) by sending in 100 US combat troops argued that: “WikiLeaks cables and the US National Strategy for Counter-terrorism show, American plans for Africa are part of a global design in which 60,000 special forces, including death squads, operate in 75 countries. As the then defence secretary Dick Cheney pointed out in the 1990s, America simply wants to rule the world” (20 October). Perhaps Pilger could have added—through the control of its natural resources.

Many writers have seen China as the emergent heir to America’s crown. The BBC reported that the building of “aircraft carriers, high-speed trains, anti-satellite systems and so on is not just for any intrinsic value they possess, but because the Communist Party leadership see them as symbols that distinguish great powers from their competitors” and that the manned space programme “and its successors are for China, symbolic proof that China is emerging as a 21st Century superpower” (29 September).

In 1957 the Chinese Communist Party Secretary General, Deng Xiaoping, described the initial steps to becoming a superpower. “The Soviet Union has the atom bomb. Where does the significance lie? It lies in the fact that the imperialists are afraid of it. Are the imperialists afraid of us? I think not . . . The United States stations its troops on Taiwan because we have no atom bombs or guided missiles” (Nuclear Weapons Databook, p. 327). Once acquired what do you do with them? A Financial Times (14 July, 2005) report gives you an idea of what the military mind thinks: “Major General Zhu Chenghu, Commandant and Professor at the College of Defence Studies at China’s National Defence University, points out that the US has designated nuclear targets east of Xian. In the event of a war breaking out between China and the US over Taiwan, he has told foreign visitors on two occasions in 2005 that: ‘We will prepare ourselves for the destruction of all the cities East of Xian.’ He also reminded his audience of China’s nuclear targeting capacity on US cities.”

Ask most people about the prospect of nuclear war and they would dismiss the idea. Iraq, Afghanistan and Libya have barely touched most western people. War has become remote done by others that are feted and paraded as heroes by the media. As Malcolm X once said: “If you’re not careful the newspapers will have you hating the oppressed and loving the people doing the oppressing.” Libya was sold to people as a “humanitarian mission”. Aristotle’s: “We make war that we may live in peace“, written 2300 years ago, still comes in handy today. Perhaps the words of someone who has experienced war is the most relevant end to an article about war.

On 11 November Ross Caputi, a Marine Corps veteran of the second siege of Fallujah related his “Thoughts on the role of veterans in the Occupy movement” through the Information Clearing House:


“I did not serve my country in Iraq; I served the 1%. It was on their behalf that I helped lay siege to Fallujah, helped kill thousands of civilians, helped displace hundreds of thousands of innocent people, and helped destroy an entire city. My ‘service’ served Exxon-Mobil, Halliburton, KBR, Blackwater, and other multinational corporations in Iraq”.

Ross Caputi is actively engaged in seeking an end to war. Are you?