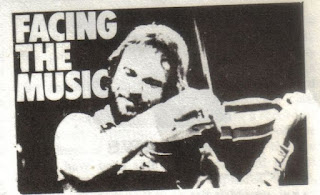 A few months ago the BBC faced a boycott by members of the Musicians Union unless it dropped plans to axe five orchestras. The walk-out of 41,000 men and women meant that top rock and pop stars would not appear and no freelance musicians would work on the radio or TV.

Among criticisms of the BBC’s action was the following from Radio Times: “Fleet Street still exists: many feel that the production of live music adds more to the quality of life than the constant purveying of doctored news of wars, disasters, crimes, etc. from every part of the world . . . If we are to have cuts, let’s see the back of the rubbishy Radio 1 disc-jockies. For young musicians who study every day to achieve an ambition in music, the disbandment of five top orchestras casts yet another shadow over the grim prospects of the big, bad world outside.” In reply, the Director-General of the BBC, Mr Trethowan, pointed out that some people who disliked pop had urged the abolition of Radio 1, but that this had the largest audience of all radio networks. “Its programmes are by far the cheapest”, he said, “and now we have more orchestras than we need”.

So what of the often-heard statement that devotion to work and study leads to the fulfilment of one’s potential? Well, you can get a professional training at the colleges of music —at a price. Promising kids are brought along providing their parents are well enough off, and frequent examinations and concerts by National Youth Orchestras are held at the “Royal Schools”. This doesn’t square at all with the promise of 1964 when a minister with responsibility for the Arts was established. At that time the government declared that its role was “not to dictate taste or to restrict the liberty of even the most unorthodox and experimental of artists”.

What sort of life is it, then, for the ten per cent or so of those who pass the candidate’s examinations at colleges of music? Like most workers, the musician experiences more downs than ups. In the 30s and 40s players slept in freezing railway stations or in the halls where they had played. In 1943 they won pension rights but in the mid-fifties the London Philharmonic became insolvent and the players lost their pensions and their contracts. In 1971 they got government grants—17 per cent of the budget—but still had no pensions to look forward to. The cuts of 1980 have been the last in a series of blows. Capitalism pays the piper and calls the tune.