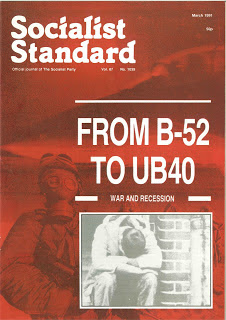 Let us start on some points we can agree about:


Socialists are not alone in recognising these points. Despite the mind-destroying propaganda of the pro-war media, there are hundreds of thousands of workers in Britain, across Europe, in the USA and in the Gulf states who know that the Gulf war is a war for the control of oil. which has little to do with what the ruling class say it is about.

It is fundamentally important that socialists are not lone voices in a global wilderness in which everyone else is totally conned by capitalist lies. The existence of a vocal anti-war movement is proof that we workers have brains of our own and will not always fall prey to the lies of our rulers.

The problem is that so much of the anti-war rhetoric is confined to the futile hope of ending wars within the capitalist system. This is as hopeless as trying to end street crime in the midst of urban slums and mass poverty. The hard fact is that wars—all wars—are effects of a cause. Just as the mugger is the effect of the brutalising, alienated social environment of urban capitalism, so war is the effect of a system of persistent rivalry over raw materials, resources (including oil), markets and exploitable territories and populations. This persistent rivalry is inherent to the world capitalist system. The profit system without competing, plundering and—when push comes to shove—fighting rival gangs of capitalists could not exist. If you accept capitalism you must accept that there will be wars.

Within the anti-war movement there are some serious misconceptions. There are those who call upon the capitalist owners of the Earth to act morally. The United Nations is seen as a moralising force, coming along to capitalist gangsters who take their rivalry too far and telling them off. This does not work. No force on Earth can make the capitalists relegate commercial advantage to humanitarian concerns. At a recent anti-war demonstration in London a group of Christians on the outskirts of the crowd were praying for peace. They might just as well play dominoes for peace; war is not a matter for mythical spirits in the sky to solve. Then there are the left-wing sects whose own Leninist theology is akin to religious dogma, who argue that any enemy of the American and British ruling class must be a friend. So it is that the SWP have stated that they hope Saddam gives America a bloody nose (as if it is Saddam doing the fighting rather than the poor, frightened Iraqi conscripts, and as if the recipients of the bloody nose will be the parasites of Wall Street) and the RCP urges workers to take sides with Iraq. What utter confusion these self-appointed leaders of the working class cause.

War will not be ended by wishing it away or by taking sides. For the effect to be removed its cancerous cause must be destroyed. This is the case for socialist revolution. Nothing short will lead to a peaceful world. 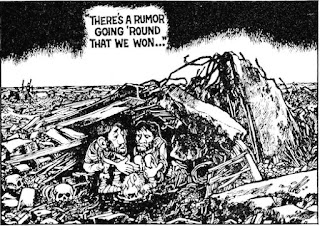 After this war
With naivety and hypocrisy combined, the politicians talk of how the defeat of Saddam will lead to peace. Do they expect us to have forgotten the First World War which they called ‘‘the war to end all wars”? The British Empire and its allies won; Germany was humiliated and the Kaiser overthrown. In the aftermath of war the League of Nations promised a new world order of peaceful national co-existence. In 1939 the world was at war again. Once more, we were told that Hitler must be defeated at all costs. Victory for the Allies would mean no more Hitlers. One of the Allies was Stalin and. after the defeat of Hitler, his dictatorship controlled vast areas of Europe that had not been its victims before the war. Was this a defeat for dictatorship? Of course not. After the Second World War came the United Nations with its grand promises. In reality, the UN has been a tool of the most powerful capitalist nations and that is why its resolutions. ranging from that condemning the Israeli occupation of the West Bank to the Russian invasion of Afghanistan, have been worthless. In Vietnam the American Empire claimed to be making the world safe for democracy. Today the Vietnamese workers live under a hideous dictatorship and the Cambodians live under constant threat from the vicious Khmer Rouge now armed and funded by the West.

George Bush, who was head of the CIA when Saddam began massacring the Kurds, and who was an oil multi-millionaire in his twenties, speaks of the New World Order which will follow the defeat of Iraq. Is this new order going to benefit the unelected, tyrannical monarchs of the Arab states who are Bush’s allies in this war? Will it benefit Gorbachov, the most centralised power-holder in the Russian Empire since Stalin? Will it benefit the butchers of Tiananmen Square who still rule over a fifth of the world’s population? Will it benefit the Turkish rulers who have locked up trade unionists in hellish prisons, but are on "our" side because they allow bombing raids on Baghdad from their air bases? Will it include the Israeli rulers who have imposed a curfew on over a million Palestinians for over a month? And if these are to be the beneficiaries of this "new world order", then one thing is for sure: times will be even worse for the workers of the world.


Worse to come
World capitalism is completely out of control. It is. as the Socialist Party has always said, a system of economic and social anarchy. Only a year ago the more naive capitalists were rejoicing at the coming of peace in our time. The Cold War was over; the good items were here; there was Eastern Europe to plunder and the future looked rosy. No sooner had the talk of the "peace dividend" made the headlines than war was on the agenda. Once again high dividends are to be derived from arms investment. Capitalism has no power to prevent wars from happening or from predicting when they will come. There is a reason for this

Capitalism is an unplanned system. Each company chases after profits, quite without any care of how this affects others. Each nation-state (which is a gang of capitalist thieves dominating one territory) carries on regardless of the rest. International treaties count for nothing when it comes to it. Iraq is party to the treaty forbidding the use of biological and chemical weapons. The USA has signed treaties making nuclear war illegal and this makes not a scrap of difference to the implicit threats of nuclear attack which they have made. Likewise, treaties of international friendship count for nothing: Jordan is committed to alliance with Britain, but this has not stopped Jordanian support for Iraq; the so-called European Community has fallen apart in the fragmented national responses to the war. Capitalist "agreements" are as reliable as one between Al Capone and Bugsy Malone.

There are over 160 nations in the world today. All of them are capitalist; there could be no such thing as a "socialist country". Each is armed. Each will fight for its economic interests. As world capitalism develops, more and more of these nations will threaten other nations. More will obtain nuclear technology and other awful weaponry with which they can threaten the rest of the world. In the long run, it seems very unlikely that nuclear and chemical weapons will not be used, by design or accident.
In addition to the multitude of legalised national gangs, there are vast numbers of would-be national groups. These are referred to by the legalised gangsters as terrorists. In fact, all warfare is terrorism. As world capitalism continues, more of these will obtain the capacity to blow up larger and larger areas. Today the IRA can bomb Downing Street; who is to say that five years from now the IRA, ETA or the PLO will not have biological or nuclear weapons? Certainly, the current holders of these disgusting weapons are in no moral position to tell their weaker power rivals that such weaponry is a bad thing to have. 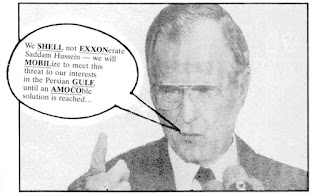 With the ending of the Cold War, when the world was largely threatened by two giant superpowers, the planet Earth is not more secure. We are far less secure. Now we are entering a period in which the right to be a world power is spreading; weapons of mass destruction are escalating; the possibility of passing arms limitation agreements is less credible than ever.

It may be that the war in the Gulf will be the first act of a Third World War. If Saddam is defeated only a fool could be cheered by the likely rise of Assad of Syria as a new Middle Eastern super-ruler. The extent to which this conflict will destroy vast areas of the world is unknown. In one sense, it is almost too late to worry about that. More important is the prospect of the next war after this one. We can be sure that there will be another war if capitalism goes on. We can be sure that the more world battles there are the more unthinkable military results will become compulsively thinkable. The question is not whether there will be another war. but which of several likely areas it will be in and when it will commence.

It is important that workers oppose the current war, but such opposition alone amounts to crying in the dark. Only by dealing at root with the cause of war can the world ever be safe. Only an anti-capitalism movement can be an effective anti-war movement. This may sound like too huge a task. The awful consequences of failing in that task should motivate every reader to play their active part in ridding the world of the war-creating system before the system rids the world of humanity.