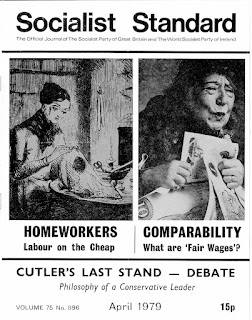 One of the main themes of Shakespeare’s telly spectacular Julius Caesar is that of “honourable men". Every schoolboy knows how Mark Antony (himself not averse to a little honest cheating) used that phrase over and over again to describe the conspirators who had recently murdered their former friend, Caesar. So successful was Antony in the use of these words that the mob eventually set off howling for the murderers’ blood. The parallels between this and some modern politicians and members of the capitalist class (all honourable men) are interesting.

Take for example, the Peachey Property Corporation. The former chairman of this group, Sir Eric Miller, shot himself. (It would have been more romantic had he run on his own sword as Brutus and Cassius did, but never mind). He did so when it was perfectly obvious that the huge financial fiddles that he had undertaken were coming to light. The Department of Trade report investigating Peachey Properties said, according to the Guardian (31.1.79) "Sir Eric covered his misdeeds by telling lies freely, fabricating false documents and causing others to fabricate and utter false documents.’’ (Which didn’t prevent him getting his knighthood).

Dead men are supposed to tell no tales, that Sir Eric’s ghost, like Caesar’s before him is causing other former friends some little problems. It appears that Sir Eric, according to the Department of Trade used the company’s money as his own instead of treating it as the money of others, which it was. As is well known, Sir Eric dispensed little favours to his friends. For example filing cabinets and £3304 worth of champagne to a party for Harold Wilson. (Perhaps Harold needed the filing cabinets to store the champagne.) Wilson of course was good to Erie; after all, Wilson knighted Eric before knighting himself. True brotherhood.


More Tales of the Dead

Then there was Reggie Maudling. Of course he is now dead. 1 say "of course” since there were those who maintained you could not tell the difference. He was another honourable man. No other politician was more often almost Prime Minister this century, and you cannot get more honourable than that. He too had his little friends—such as Sir Eric. Reggie did not get any champagne; but as is fairly well known he received more substantial benefits in the property market. The Observer (4.2.79) notes that the Department of Trade report explained the complicated deal whereby Reggie sold the freehold of his house to Peachey but received it back again on a long lease. Peachey then did £22,500 worth of improvements to Reggie’s house in return for £100 a year rent. Sounds like a bargain.

When Reggie became Home Secretary in 1970 and therefore honourably brought to an end his association with the honourable Erie, Eric sent Reggie’s wife a little present. It was only a chess set— pretty innocent. Usually only costs a couple of pounds in Woolworths. But this one was made of silver and was worth (1970 prices) a mere £2,750. Of course Reggie had plenty of other friends: such as Poulson (jailed for a long term for corruption).

We, unlike Shakespeare, are not sexist, so women get in on the act. Instead of "honourable men." Shakespeare could have had "honourable persons.” There is another member of the British peerage the Peachey Report did not even mention—former Secretary to Champagne Harold, Lady Falkender herself. This honourable lady also had little advantages from Peachey; like the loan of a Volvo car. Falkender explained it did not come from Peachey at all, but from Sir Eric personally. Well quite. That explains it.

Then there is Lord Kagan of Gannex, recently on an extended holiday in Israel. He is finding it a little inconvenient to return home since there is a warrant for his arrest on currency offences involving £150,000. Still, small fry to this honourable man. His raincoat business must have been worth millions. According to the Guardian, when asked if he would come back to claim his ancestral heritage sometime, Lord K replied; “Oh yes . . . when the mood takes me". (31.1.79).

Just like any other worker really. When you go on holiday, I suppose you come back when the mood takes you too. The latest position is that Lord K is on his way to Spain (Guardian 2.3.79). Meantime his wife and son are on bail on corruption charges.

One interesting link in this is Champagne Harold himself. All these honourable persons (except Reggie—how was he forgotten?) have become knights, lords or ladies, thanks to Harold's little benefactions. He explained that “moving businessmen into the Lords puts an entirely different dimension on the honours system”. (Daily Mirror 2.3.79). You can say that again. Harold certainly had a revealing collection of friends.

Another honourable man on extended leave is George de Chabris. He is currently in Florida, also with no intention of returning in a rush. Among other little gems for which the police would like to "see" (presumably behind bars) this gentleman, are the following: a £10,000 transaction with a prominent liberal (unnamed as yet), donations to the Liberal Party, and Mr Chabris’s role as a "witness" to events at the National Liberal Club which interest the police. This one seems to have little to do with Champagne Harold. As the Guardian (23.2.79) put it; "Sir Harold Wilson said at Westminster last night that he did not know who George de Chabris was, ‘I have no recollection of this gentleman at all’”.

Meantime, while this honourable lot cheat and thieve and live it up at the worker’s expense, may I remind you that local authority workers, ambulance men and many others have been on strike— for a basic wage of £60 a week. And another honourable man, James Callaghan, said that figure is too much. At the time of writing £4.50 a week (about 11 per cent of these workers' current wage) is the absolute maximum offered. If Mark Antony had offered that to the mob they might at least have had the sense to lynch him.


Some useful advice for the Archbishop of Canterbury and his colleagues

(From The Iron Heel, by Jack London).