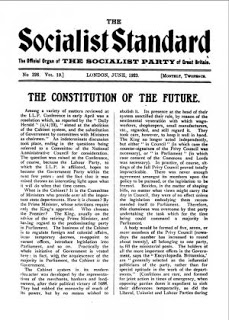 From the June 1923 issue of the Socialist Standard
A gentleman more renowned for his wit than the science of his economic writings once said : “The working-class are a large body of people who are a nuisance, and they ought to be abolished” ; a statement with which we are in agreement. To the uninitiated such a proposition may seem in the nature of a demand for the annihilation of that variously conceived mass of humanity, but their abolition properly understood no more implies such than the abolition of slavery meant the destruction of the slave. One of the methods generally employed by Capitalist apologists in endeavouring to confound potential thinkers among the workers is to refer to “various classes,” “the public,” “the nation,” manual and brain workers, etc., meaningless terms and imaginary divisions used to hide the ugly and awkward fact that by scientific generalisation we can separate modern society into two distinct and antagonistic sections, a large majority, and a small minority. Further examination and enquiry will furnish us with the facts from which we can establish the identity of these two sections as, Working-Class and Capitalist Class respectively. This step in the mental equipment of the worker forms the basis upon which all correct economic thought on modern society is erected. Let his conception of classes be unsound, and his reasoning becomes confused as a consequence : Who then are the Working-Class? appearances are deceptive. A labourer goes to work early clad in cap and corduroy, an architect follows later indistinguishable from one of the directors. The architect is termed skilled, but would cut a sorry shine and probably break his neck if he tried dock work; while the docker is wrongly assumed unskilled. One receives a day’s pay, or a weekly wage; while the other draws his “salary.” Imagine the signwriter trying to wipe a joint alongside a plumber, or reverse the situation; contemplate a piano-tuner attempting to drive a taxi-cab the shortest route from Tottenham to Clapham Junction, and we see what an absurdity it is to attribute a monopoly of skill to any set or group of workers. What applies to these few instances is equally true of the millions from the lift boy to the manager, all are units with varying proportions of mental and physical energy, engaged in the social production and distribution of wealth. Of such then is the kingdom of the workers composed, different in many ways from an appearance point of view. We cannot classify them by dress, nor by mode of occupation, or by manner of remuneration, for there are daily, weekly, monthly, and other methods of payments of workers. In what respect is it then that we can put this apparently different mass of people into one class? When we have abstracted all their personal and minor peculiarities, what is it we have left common to them all, and yet is not common to the Capitalists as a class? All must work to live—but !—and here’s the point, they cannot work until they have found a master who will purchase their particular mode of expending their mental and physical abilities. Why you ask must this multitude of men and women from the professional to the casual labourer spend their lives year out and year in in the pursuit of these tasks. They do not do it because they love work, the only colour they, ever get usually begins where work ends; neither do they do it because it gives them an easy and pleasant life. Statistics of our industrial wreckage proves that. They do it because they are without property in the things that it is necessary to operate upon to produce wealth —the land, machinery, factories, warehouses, railways, etc.—all these things are the property of the small minority mentioned (the Capitalist Class), and the complex system of wealth production to-day requires all these various kinds of workers. All are equally important as cogs in the colossal machinery of modern production, they are the great majority (the Working-Class). As a class the masters do not work, the organising, supervising, etc., have become the specialised services of certain salaried workers, who when no longer wanted, or becoming unsuitable, “resign” instead of getting the “bullet.” Why then are the workers poor and the idlers wealthy?
Because the wealth produced belongs to those who own the means of producing it. The producers only being returned sufficient on the average to prolong their lives as useful instruments for producing profit. The lesson of the last half century has been that an ever-increasing quantity of wealth can be produced with a relatively smaller number of workers. This applies to the distributive trades as well, shop assistants, travellers, etc., everywhere the gloomy prospect for the workers is the same, more jobbers than jobs, the haunting insecurity of the future. And yet need it be? Yes and No. Yes, if you are going to continue as contented menials, your conditions must get relatively worse; and no, if you will study your own class interests in their scientific aspect—Socialism. Then you will see clearly the underlying meaning of our jest, for to abolish the Working-Class is to end the slavish conditions of your present existence and establish the classless society, The Co-operative Commonwealth.
W. E. MacHaffie
Posted by Imposs1904 at 2:04 PM

What a cracking article. Really enjoyed it. Not sure about the long arse paragraphs but I enjoyed it all the same.

MacHaffie was a really underrated writer in the Standard. His pen-name was 'Mac'. What little I know about his short and tragic life is contained within his obituary from the May 1931 issue of the Socialist Standard.