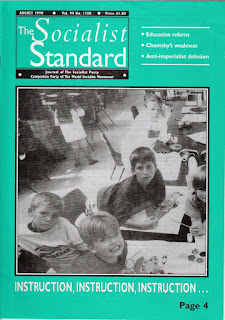 From the August 1998 issue of the Socialist Standard

There was sport before capitalism and there will no doubt be sport after capitalism. Here we discuss three questions. What does the profit system do to this thing called sport? What are the pros and cons of the way we "do" sport today? And what will sport be like when we replace capitalism with socialism?

It is a truism - if not a cliche - that sport today is big business, at least in the economically developed parts of the world. Like all capitalist businesses, sport is one in which profit seeking is the spur.

Take football for example. Huge sums of money change hands around the spectacle of 22 men chasing and kicking a piece of leather. There are admission charges to grounds, the buying and selling of players (sometimes for millions of pounds), the "merchand-ising" of items of clothing and other paraphernalia to the faithful fans, the money gambled on the results of matches (out of which the pools promoters, the bookmakers and the government take a hefty slice). The shares of the big football clubs are marketed on the stock exchange.

The process is similar, with some differences of detail, in other sports around the world. In 1996 two megacapitalists, Kerry Packer and Rupert Murdoch, joined forces to launch a "super league" of Australian rugby football. As with World Series cricket, the target was pay-TV The previously free-to-air broadcasts were turned into paid-for commodities.

Reforming sport
Not all sport is useful to capitalism. And sometimes sport has to be reformed to make it amenable to the profit-seeking process. Originally, football was a very unorganised, rough and wild "folk game" between village teams of different sizes and with no fixed pitch boundaries. Only in the nineteenth century was it adapted for mass consumption.

Organised and commercialised sport helps to train a "docile" labour force. It encourages an acceptance of the kind of work discipline demanded by capitalist production. Ellis Cashmore. in his Making Sense of Sport, has a splendid cartoon in which a factory time-keeper is shown back-to-back with a referee, stop-watch in hand.

Hard work is urged in both competitive sport and employment. Sport both expresses and reinforces "qualities" that have counterparts in society at large. Aggressive individualism, ruthless competitive-ness. elitism, nationalism: all these are today regarded as admirable.

Writers on the social function of sport offer hypotheses about why it is so popular. Why do some people follow sport with much the same zeal and commitment as active churchgoers follow religion? Sport, it is suggested, has become a substitute for religion because it supplies the follower with a meaningful cause, an emblematic focus, a sense of allegiance and belonging.

Consuming sport
Perhaps the most notable feature of modern sport is that, while it is bought and sold rather like any other commodity or service, it is most like entertainment or showbusiness. In terms of preparing workers to be consumers not only of things but also of status-quo ways of thinking, the marriage of sport and television has a lot to answer for.

So what of sport in socialist society? One thing we can say for certain is that it will be engaged in for its own sake and not for money. We can all have our own ideas about what sports we would like to take part in or watch. The provision of facilities and events will be decided democratically. Competition will probably continue to play a part in some sports. But we can be fairly certain that there will be a red card for anyone who praises the mantra "Winning isn't the main thing? it's the only thing."