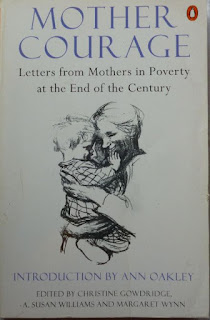 Book Review from the November 1998 issue of the Socialist Standard

Mother Courage: Letters from Mothers in Poverty at the End of the Century. edited by Christine Gowdridge, A. Susan Williams and Margaret Wynn. Penguin 1997.

The Maternity Alliance was founded in 1980 to campaign for improvements in the lives of parents and babies in Britain. In its policy document, "Maternity into the twenty first century", the Alliance states, "We believe not only in the right of women to choose where and how to give birth, but, most importantly, in the need to address the economic and social factors which . . . determine women's experience of pregnancy and the health of the baby."

Mother Courage, published in association with the Maternity Alliance, is a collection of letters written by mothers whose struggle against poverty in their daily lives undermines the work of bearing and raising their children. It mirrors a similar publication by the Women's Co-operation Guild 1915, Maternity: Letters from Working Women, and is overtly political in its intent. In the introduction by Ann Oakley, the changes and continuities in the lives of mothers in poverty over the intervening period are chronicled. The question is posed, but remains unanswered, "Why is it still necessary, over 80 years later, to collect together and publicise women's accounts in this way. Surely the situation of mothers is vastly different now?"

Clearly there have been real improvements, particularly in the area of maternal and child health following the establishment of the National Health Service in 1948. But there is also something much more fundamental going on than mere deficiencies in the welfare state when it still has to be stated as an aim for the next century that "no baby should be born poor" (Maternity Alliance policy document).

Nonetheless this is an important book that gives voice to those mothers whose welfare is systematically neglected and about whom our society is silent, except in condemnation. Their poverty is one of bare subsistence on means-tested benefits, or of being trapped into low paid, insecure part-time work. They are frequently without the financial, practical or emotional support from the father of their children, and many face domestic violence.

Submerged beneath the political rhetoric of the family as the moral heart of society (and motherhood as its lynchpin), they sustain their hopes and fears with more courage than most. The book bears the following dedication from Brecht's 1940 play, Mother Courage: "Poor folk got to have courage . . . Mere fact they bring kids into world shows they got courage." Remember these mothers when next you hear the claim that women have been liberated.