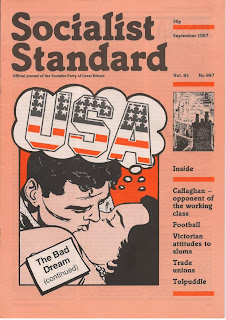 From the September 1987 issue of the Socialist Standard


The drive from the White House to radio station WAMU takes about 20 minutes and passes from the mansion provided as the presidential residence of a retired millionaire B-movie actor through some of the worst slums I have ever seen. It is hard to believe that human beings inhabit some of the squalid dwellings of downtown Washington DC. There are not supposed to be poor people in America: it said nothing about them in the brochure. This is the land of the affluent workers, isn't it? Richard Montague from Belfast, a city notorious for its slum areas sighed, "Now, this is what I call a ghetto," he said. "Worse than the slums we have at home". Eighty per cent of the population of the US capital city are black workers, mainly employed in the low-wage service industries, mainly housed in the kind of rotten conditions which the tourists do not go to see.

Sitting in the radio studio was Fred Fiske, presenter of Washington's most prestigious phone-in programme. A man given to talking a lot about "the genius of American capitalism", a bully with a reputation for putting callers straight - a bigot with a microphone. For two hours Montague and I debated the case for world socialism, repeatedly confronting the confusion and distortion of our host's capitalist tunnel-vision intellect. It was a good two hours: the man who was going to put us reds in our place was put in his place. At the end of the show, as we were leaving, the news came on: four people dead, 15 injured after a tenement building in the South Bronx of New York collapsed. Ah, the genius of American capitalism.

On the road from Washington to Charlottesville Virginia are dozens of caravans. Holiday homes for American workers seeking a break in the countryside? Not at all. These were the homes of families too poor to live anywhere but in run-down vans on the side of the road. As the recession hits the USA harder and unemployment rises in the cities, this is the fate of many an American worker.

Slums in America? Homeless in America? Can this be possible in the land of the free? Not according to Professor Bornhofen, an economist whom I had the pleasure of debating against in Michigan on the question, "Capitalism versus Socialism". In stating the case against capitalism I referred to workers too poor to afford shelter: 100,000 officially homeless in Britain and who knows how many more in the USA? With all the eloquence and erudition which one would expect from high-salaried apologist for the profit system, Bornhofen responded, "That's a lot of crap. Why, I doubt if there are more than a 1,000 homeless people in America." Well, if ignorance is bliss, Professor Bornhofen should have been one of the happiest men in Michigan that day.

No homeless workers in America —1,000 at the most? Let us turn to the rich oil state of Texas. According to figures published by the National Coalition for the Homeless there are 25,000 homeless people in Houston alone. The city devotes not a single dollar of taxes to building houses or providing for the homeless, the state of Texas is second only to Mississippi at the bottom of the league tables for state provision of social services. One newspaper reports the situation in the following terms:

In the chapel of downtown Houston's Star of Hope Mission sits a Saturday night congregation that is a cross-section of the city's hardcore homeless. Tired old men are here in mix-and-match clothing from the mission closet. While the physically disabled set their sights on lower bunks, the mentally disabled engage in long conversations with no one in particular. Here, too, are groups of lean young men only a few days out of the Texas Department of Corrections maximum security facility . . . A few men in their 30s—new to the streets and ill at ease—talk to no one. All need a meal and a place to sleep . . . The mission director reads from his list of randomly ordered numbers, and those remaining show their numbered bed-tickets and file out towards the 500-bed dorm. It's a place to sleep until breakfast call at 4.30a.m. In the huge converted warehouse the roof leaks and it's cold. Every man sleeps fully dressed. All of this, three meals and a bunk—offered by what is arguably the most generous men's shelter in the state—is provided without the expenditure of a single tax dollar. In Texas the homeless live off the kindness of strangers, not taxpayers. (In These Times, 8 April, 1987)

In Dallas, the city known in this country from the the TV soap opera in which everyone is either rich or very rich, there are 15,000 homeless people out of a population of one million. According to John Fullenwinder, the Dallas chairperson of the National Coalition for the Homeless, there were just under 43,000 forced-entry evictions in Dallas last year: a rate of 165 each working day. And that is just in two cities in one of the 50 states of the USA.

All of the other obscenities of working class poverty exist in the illusory land of the free, Even the so-called affluent American workers are now caught in the trap of unemployment. The US Department of Education has reported that 51 per cent of high school graduates not entering university are without a full-time job three years after graduation. Among 18-24 year-olds, the US Census Bureau has recorded a 50 per cent increase of those living in official poverty in the five years between 1979 and 1984. Not only are the poor becoming poorer but young workers who have been regarded as economically secure are moving ever more rapidly into the ranks of the officially poor.

Poverty in the USA breeds its own problems, not least of which is racism. When workers are being squeezed extra-hard so that the rich can get richer they soon turn on one another. Violence against American blacks has been on the increase, at the beginning of this year a gang of racists beat up three black men in the white suburb of New York called Howard Beach —one of the victims was murdered. In one area of New Orleans a sheriff has become a popular racist hero for threatening to arrest any blacks caught walking or riding through the white folks' town over which he presides. ("A New Racism", The Nation, 10 January 1987).

In the USA one per cent of the population own 40 per cent of all marketable wealth. That is 20 per cent more than they owned 20 years ago. In short, the super-rich are owning and controlling more and more and more. What they possess the overwhelming majority of Americans are excluded from possessing. The power of the capitalist majority is at the expense of the freedom of the wealth-producing majority to own and control the wealth which surrounds them. That is what capitalist freedom means: they own; we don't —they are few, we are many —they have privilege, we work like horses producing profits to feed that privilege. That is the freedom offered by "the land of the free".
Steve Coleman