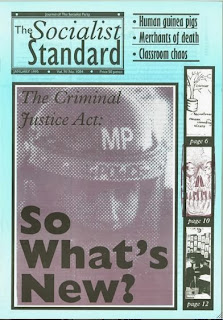 From the January 1995 issue of the Socialist Standard

Up until a few years ago the Provisional IRA and Sinn Fein placed considerable emphasis on the achievement of a "Socialist Workers' Republic", which nonsensical contradiction-in-terms they claimed as their objective. In Eira Nua (New Ireland), their policy document of 1971, they showed a remarkable ignorance of simple arithmetic by adding one form of capitalism to another form of capitalism and concluding that the answer was Socialism. Thus:

"In the drafting of this programme our aim has been to outline a social and economic system which would strike a balance between Western individualistic capitalism with its poor and hungry amid plenty on the right and Eastern Soviet state capitalism (or any of its variations) with its denial of freedom and human rights on the left." (Eira Nua, 1971, p4)

The reader of this nonsense, which was to be based on "Christian principles" of course, might construe it to mean that Sinn Fein/IRA, if it was victorious, intended to reward the working class of Ireland with a continuation of the "poor and hungry amid plenty" welded to a "denial of freedom and human rights'". Whatever it was supposed to mean, it had no association whatsoever  with Socialism.

In fact the republicans simply misused the term "socialist" as an emotive expression of their alleged concern for the working class - in imitation, it could said, of their hero, James Connolly, who while phrase-mongering about "socialism" became a military leader, a "General" no less, and led three hundred deprived and deceived workers out to fight for Irish capitalism.

The gun, the bomb and the "Socialist Workers' Republic" was ideological milk and honey to the armchair revolutionaries of the Left, especially in Britain. To the disparate groups of revolutionary romantics the IRA were "doers". The fact the volunteers were slaughtering other members of the working class and outdoing the Unionists in driving a wedge between workers - and all to reinforce the miserable capitalism we have including its eastern state form - was just another of the things that never occurred to the Left.

Enter Hume, the darling of the clergy and beloved of reactionary American capitalist politicians, bring in Reynolds and the southern gombeens. Even with bad arithmetic it is easy to see that this genteel gathering wields influence and power. New vistas! New drawing rooms where even the misuse of the term "socialist" would be somewhat . . . well . . . out of place.

With the same mental dexterity as the Armalite was abandoned in favour of politicking, so, too, has the nonsense about Socialism been abandoned in the interests of new friendships. The Left might feel betrayed - it's a cause hazard with them - but the feeling will not be as acute as it will be for those unfortunates who hoped that the Republican movement might do something to alleviate their working-class problems.
Richard Montague