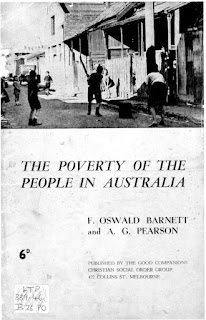 Book Review from the December 1944 issue of the Socialist Standard

“The Poverty of the People in Australia," by F. Oswald Harnett and A. G. Pearson, M.A. Published by The Good Companions Christian Social Order Group, 422, Collins Street, Melbourne.

There was a time, well within the lifetime of those of middle age, when Australia gained a reputation abroad as a world leader in the field of Social Reform, And some so-called Socialist Parties proclaimed the achievement of Socialism in Australia.

About the same time Australian Capitalist Governments and astute shipping companies cooperated to advertise Australia throughout the old world as “The Land of Gold and Sunshine," and to spread the lie that poverty was non-existent in Australia. Prospective immigrants were supplied gratis with pamphlets showing glowing pictures of model homesteads, herds of cattle standing knee deep in water by the river's edge, with the vista of a prosperous countryside behind them.

The unfortunate immigrant, befooled by the stupidities of the so-called Socialists or the clever propaganda of the Governments and their commission-chasing allies, soon received a hard lesson in the difference between the ideal and the real, between propaganda and fact. Once arrived on the shores of the Great South Land, he discovered that, while there was land and gold in plenty, most of what was worth having had been grabbed long before by Johnny-on-tbe-spot—the Australian capitalist, and that sunshine as a staple article of diet is quite unsatisfactory. He also discovered the harsh reality that lay behind all this specious propaganda—that the towns and cities of Australia were just as full of poverty, misery and unemployment as the land he had left, and that Australian capitalism desired cheap labour for the already established farmers, and he found himself compelled to work under conditions and for wages which the native white Australian regarded as the last refuge of the otherwise incompetent.

The pamphlet under review shows clearly that the conditions which then existed, still exist, and that 30 years after the outbreak of the First World War the victory over poverty has still to be achieved in Australia, as elsewhere. The work consists of two articles, one by each of the authors named above, and they prove conclusively, on the basis of the statistics gathered and tabulated by the Commonwealth Statistician and by other equally competent authorities, that poverty is widespread even in times of so-called prosperity. So easy is their task that Mr. Barnett says, “One is almost embarrassed at the wealth of the material available."

As members, of the working class, Socialists need no reassurance, either from the Commonwealth Statistician or the Good Companions, as to the existence of poverty, misery and unemployment; they have been part of our everyday experience. However, the pamphlet will be valuable to those whose limited experience renders such proof necessary. After considering the statistics of the Commonwealth Census completed for June 30th, 1933. and the report of the Slum Abolition and Rehousing Board (Melbourne, 1936), Mr. Barnett says:—

It is thus established that—
(1) In 1933 more than three-fifths of the male breadwinners in the Commonwealth (20 years of age or over) were receiving less than the basic wage.
(2) At the same time more than one-half of the married men of the Commonwealth received less than the basic wage.
(3) In 1936 the survey of the industrial areas of Melbourne revealed that at least 6,000 families in Melbourne were living in houses unfit for human habitation, and the total income of these families averaged £2 10s. 4d. per family.
Quoting his conclusions as a result of a personal survey of thr working-class suburb of Fitzroy (Melbourne), he says on page 6:—   More than two-thirds of its poorest inhabitants are classed as ordinary decent citizens, whose only crime is their abject poverty. . . . The attempt to blame the poor for their poverty is either the result of ignorance or the desire to avoid the real issues that are involved.


"The present economic system demands a vast pool of idle labour. Into the pool men are thrust when times are slack, out of the pool they are drawn when times are good. . . . A little thought will show that unemployment and casual labour are the inevitable product of the present so-called system, the main characteristic of which, as Mr. H. G. Wells points out, is the entire absence of system."

Here, again, Socialists have the advantage of Mr. Barnett and Mr. Wells, for this discovery of the inevitability of unemployment under capitalism is an old story to us; not only from bitter personal experience hut also because Karl Marx demonstrated the necessity of an industrial reserve army (the unemployed) and the inevitability of its progressive growth under capitalism about 80 years ago. (See "Capital,” Vol. 1. Chapter XXV., Sect, 3, pp. 642 et seq. W. Glaisher, Ed.)

The second article in the pamphlet under review, written by Mr. Pearson, reinforces and brings up to date Mr. Barnett's demonstration of the failure of Australian capitalism to provide an adequate standard of living for the great mass of the population. As a concise and adequate proof of the Socialist's contention that capitalism and poverty are inseparable, we can heartily recommend the pamphlet. It is when we come to consider the solution offered for the lamentable conditions so vividly described therein, that we part company with the authors.

Divested of its religious trimmings and put into plain language, it is just another variant of State or State-controlled capitalism, and while a development in this direction seems inevitable in the immediate future, it will result in no more than the reorganisation of poverty.

The solution of the poverty problem lies in the hands of those who suffer most from it—the working class, and can only be achieved when that class realises its historic mission, when, freed from tho illusions bred by capitalism and fostered by religion, it goes forward to solve for ever the problem of poverty by establishing Socialism.